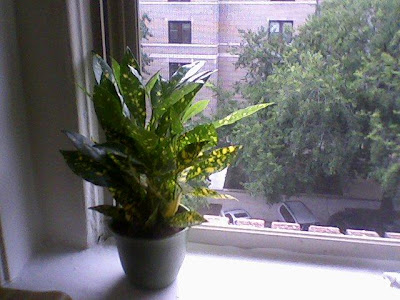 My new Gold Dust Croton house plant (at least I think that's what it is called). I'm calling it "Crotie." It replaces the Gold Dust Croton I had from 1988 to about 1994, along with an asparagus fern that also died.
Oh, Crotie, if you could have seen me on the cold, clear night across the United States in Dec. 1988 when I had just turned 19 years old and was rushing home from Seattle via Chicago-O'Hare to Newark (to meet, yes, my mom) ... and there I was dashing through O'Hare carrying both plants. The window seat views on the jets were so lovely.
####### 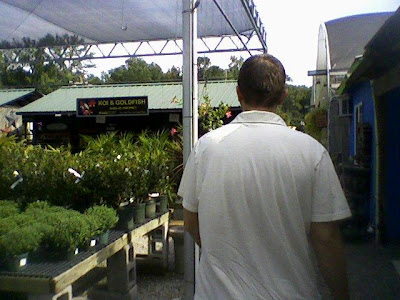 ... Chris was looking for a new plant. We also went to Lowe's and another place whose name I can't recall. But Chris got me Crotie at that final place.
#######

OK, this is my updated blog entry, except I'm writing (starting) it at the wee hour time of 2:18AM as I watch a rerun of an episode of How The Earth Was Made on the History Channel with a focus on this episode of the geological history of New York City. This movie assumes in its ending the closure of the Atlantic Ocean and formation of "Amasia" (instead of "Pangaea Ultima").
####### 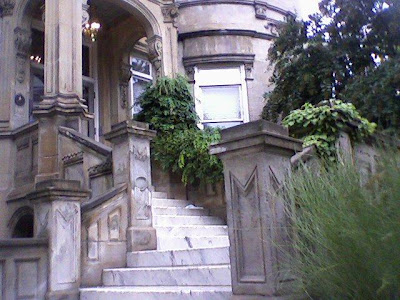 I just got back from Cobalt where -- after an OK night -- I ended up in a bitchy quarrel with a 23 year old (waif-like thin, pretty, feminine, sorority-girl-like, nervous, a bit nutty) who insulted my physical appearance AND intelligence (and who was told to shut up by a bartender who doesn't particularly like me), although I managed to get in "Do you have ANY idea how stupid you sound??").
Now it is true I'm bloated and unattractive and need to go to a fat farm somewhere in New Jersey. I look like, well, I'm fat. 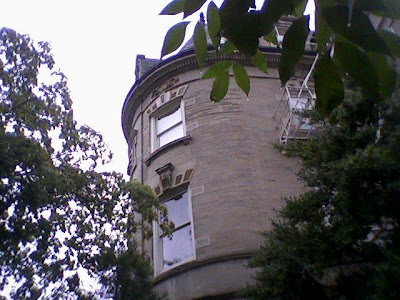 As it is, I guess I should be happy, or maybe shocked, that the Cobalt staff (my bartender friend and another bartender who doesn't really like me) intervened -- and DIDN'T turn on me but ALMOST took my side, or rather DIDN'T INSTANTLY go against me. Usually, I expect to be venom-hiss-spit upon, metaphorically speaking, or at least someone to say, "I think you need to leave now ..." in a hateful way because they are on the other person's side. Fine.
Speaking of bloated fat, I'm eating some chicken flavor Rice-a-Roni rice as a late dinner.

Anyway, I'm kind of tired now. I'm supposed to go a Nationals baseball game with Kevin later this Wednesday (today), although the weather -- yes, the weather, which NEVER does squat here except be partly cloudy, warm, humid, and dull from May 1 - Nov. 1, no matter who tells you lies to the contrary -- may actually be wet.

There is a somewhat out of season, slow-moving coastal low with upper level reflection and an upper low over Ohio and a blocking high off Nova Scotia in a "Rex Block" configuration (of blocking high north of stalled low) that could bring a period of heavy rain to the D.C. area.
As it is, the NAM/ETA model was WAAAAAY off with its forecast of 6 to 8 inches of rainfall in a 48 hour period, but the recent model runs have suggested more heavy rain. The GFS showed zilch. And the way it works here, the model predicting zilch will ALWAYS be the right one. 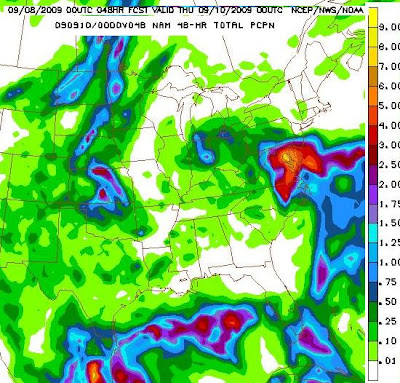 Above is the 0Z (7PM EDT) Sept. 8, 2009 run of the NAM/ETA model showing the 48-hour cumulative precip total showing a bull's eye of 5 to 6 inches of rain over the D.C. area. I adjusted the image to focus just on the Eastern and Central U.S. since the model's domain is larger. This image is from an old run but I just wanted to post it since it was sufficiently unusual that it was worth noting. Naturally, this did not verify at all.
#######

I think I'm going to bed.

I may not update this blog until Friday or so because I have a bunch of work to do for my contracting job.
Speaking of that job, do you know what's weird??

It is the fact that I'm as severely underemployed and under-paid as I am, YET this Tuesday (and perhaps today, Wednesday), I am in the process of helping a senior level NRC official go to a conference in Japan next month, unless he cancels, which wouldn't shock me. Specifically, I'm arranging things by email, sending guidelines for logistical arrangements and reimbursement rules from NISA to his staff. I get $500 if he attends, but probably not until the middle of October. That money and the $440 Sept. 20 "Global Warming Monitor" edition will pay my October rent, or at least all but $13 of it.
I'm probably on the verge of being sued by at least one creditor. I have applied for a few more jobs. I'm also going back two nights a week to UMCP campus to that meaningless tutoring I used to do two years ago. 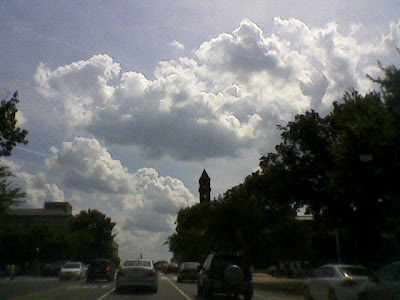 Driving with Chris T. along 14th Street past the National Mall, 2:14PM, Sept. 7, 2009, heading into the purgatory of Northern Virginia.
Chris rented a car last weekend to do some big box retail and other shopping in the suburban and exurban wilds of NoVa. We were thus in a "shuttle" that was "leaving the Mother Ship" of the Dupont area for a few hours.
#######

You popped into my head today when I looked at the sky.

You are using pretty colours these days.
And have a pretty plant.
And I am sure that you are not quite as fat as you think you are.

I write ONE negative entry and Fifi shows up ... which means she won't be back for at least another three months.

regulus is not fat at all!

and no - this was not a negative entry.

i think fifi is back to stay with us...

what i really want to know is how regulus knows the names of all the different buildings in dc.

This is not a negative entry as evidenced by the following excerpt:
(...)DIDN'T turn on me but ALMOST took my side.

I need to buy a plant or two for my place as well.

No, Fifi probably isn't back. She saw a cloud that briefly reminded her of me and paid a quick visit, saw that I was still exuding thousands of Megawatts of negativity, and left.

As for knowing building names, well, most of them have names that are on the front exterior over the main entranceway. When I take pictures and send them to my email account, put the building's name in the subject heading.

Golden Girls quote, Dorothy to her mother Sophia: "Ma, no more of this answering personals stuff. I'm getting you a plant!"

Well I thought the plant was nice, and the rainbow colours.

I felt fat this morning but I felt quite in shape last Thursday. It comes and goes