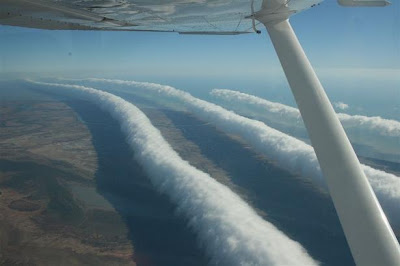 Morning Glory "roll clouds" as seen from an airplane -- although I'm not sure how high up he was and I can't tell based on the ground features -- near Burketown, Queensland, Australia. These weird looking clouds come in off the Gulf of Carpentaria at certain times of the year. Morning Glory clouds are observed in some other places but this region has the most.
Source: APOD Aug. 24, 2009

############
Just a quick update to say I plan to post a better entry on Friday or Saturday. I updated instead my Mr. Sirius blog after working on the upcoming edition of the biweekly Global Warming Monitor for my contracting job. I would call it "Global Climate Change News Monitor" but that's not my call. 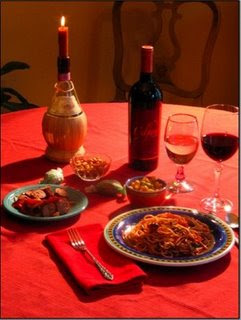 I'm supposed to go to a big Italian dinner and wine soiree at Little Fountain Cafe in Adams Morgan tomorrow that costs $60 per person, which I can ILL afford ... except my friend Phil, who arranged the thing and is inviting some of his law firm partners, insisted that I go and is paying for me.

I'm not even going to mention (Sub) Tropical Storm Danny, which will totally miss the U.S. East Coast, and certainly the mid-Atlantic / Washington, D.C. area. We don't get "weather" here.
Speaking of weather and returning to Australia, here is a satellite image that my friend Joe sent me. 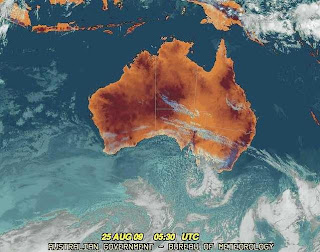 He is there for two meetings and his wife went with him. They went to Melbourne and are now in Sydney.

Alas, he won't be able to meet my former blogger friend Fifi even if he wanted to because I so lost touch with her. Boo.
Anyway, this image shows a cold front passing through Melbourne, where Joe described some rather interesting weather at certain times of the day, as well as extremely windy conditions.
That's all for now. I'm going to bed ... even as dawn breaks. I plan to get up around 1230PM. I really hope that NRC guy is able to go to that conference in Japan. I get $500 for that assignment if so.
--Regulus
Posted by Regulus at 5:28 AM

So how was dinner on Thursday and the party last night? I would have answered your text but I was asleep and didn't read it until just now. Stupid time difference.

The dinner was fine but it really was not worth the $60 plus tax and tip cost, which made it more like $75. And it cost $3 per extra glass of wine if you wanted it.

The restaurant manageress was frantic at the end to get paid, running around with checks for everyone, as if everyone were going to "dine and dash."

She really had no idea how to run an event like that. Plus the place is too small to handle that many people.

And her wine distributor was there, a short, loud-voiced, Italian guy - you probably would have found him really hot -- trying to sell his wares.

Oh, yes, you REALLY would have liked Damon's party last night ... He was shirtless by the end of the night.