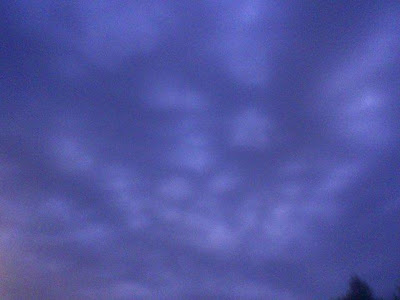 I wasn't sure whether to post this entry or not tonight at this late hour as I need to finish another assignment (described below) for my contracting job.
More "piece work."

Actually, it is rather pleasant at this 2AM hour with my window a/c humming coolly as I write up synopses of a series of articles for one of my recurring assignments. It's better than being under the ghastly fluorescent lights at work. 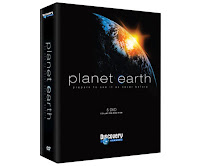 I'm watching on the Discovery Channel one of the Planet Earth series, except the commercials are every five minutes incessant (and I hit the mute button).

My internet connection is fine with no unexpected ***ware intrusions or attacks on my computer. About that, I'm so tired of that. I increasingly go only to sites I trust. The internet, by the way, is nearing its 40th birthday, having been "born" on Sept. 2, 1969 when what would become Arpanet was set up.
That's less than 3 months before my own 40th birthday on Nov. 26th. Boo. 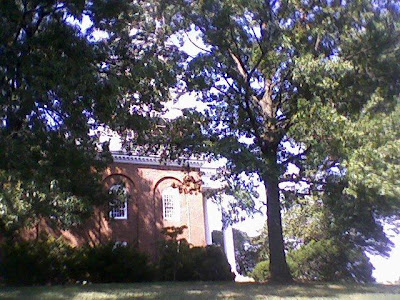 Despite the late night serenity and this work, I'm probably going to be late on my cellphone and cable/internet payments this month but I SHOULD be on time with my September rent, assuming I get a check for the expected amount this coming Friday.
I actually hate living this way, always on the edge.
This whole thing isn't going to work out ... if things don't change, I will probably have to give up my apartment in the early November time frame, and then I don't know what happens. I also foresee a crappy week ahead with lots of disappointments ... in other words, the usual crap.
####### 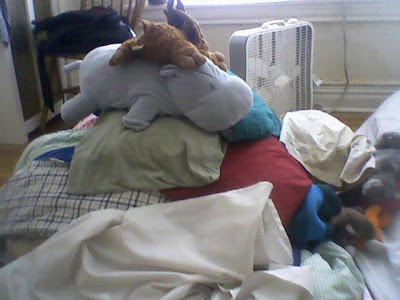 Flippo and Barney on "Mount Plush Hippo" -- which consists of quilts, blankets, and pillows.
#######

My weekend overall was a good one, except (as I noted before) the weather upset me (because of the rain we DIDN'T get thanks to the weather gods, or dynamics, conspiring against us, as ever). Earlier on Sunday, I had a nice lunch with my mom and Ray (my stepfather) in College Park this Sunday. They drove here from near Glen Burnie where they live and I met them in College Park. 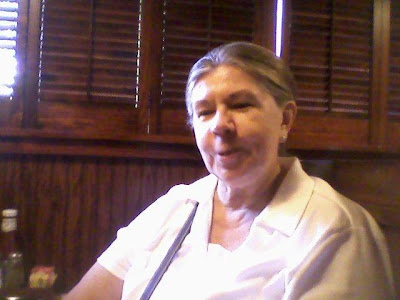 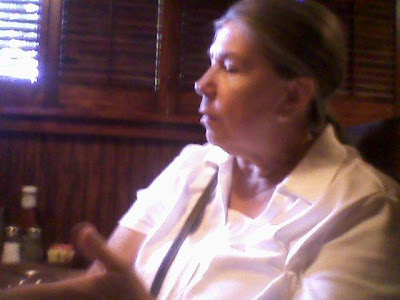 Here is a second picture of my mom.
I didn't take any of Ray. He was wearing his Vietnam Veteran baseball cap, and, paradoxically (?), a Nature Conservancy shirt. Ray is rather conservative politically.
Ray served in Vietnam from 1966 to 1969 in the Mekong Delta area, though I think he worked mostly in a supply warehouse and was not in active combat in that long ago time. My mom and Ray met in New Jersey in 1974 after she had separated from my dad.
#######

After lunch, I went to the UMCP campus to the public policy school, where I printed out some of my recent blog entries and the 16 articles that are making up this month's "thought-provoking series" for which I need to provide summaries. 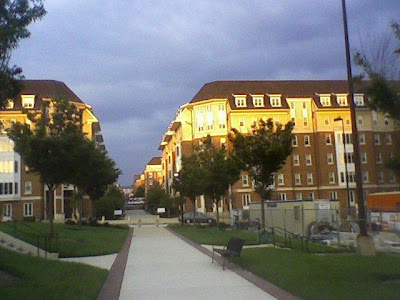 Here is the view from Van Munching Hall looking toward the South Campus area at sunset, Univ. of Maryland, College Park, 7:21PM, Aug. 30, 2009.
I still have access to the computer lab with my student ID, but probably not for very long, as I graduated in May. Classes begin tomorrow, but, alas, I will not be a student there. My relationship with UMCP appears now ... after all those degrees and years ... to be over.
#######

Changing subjects, I have opted to NOT post the pictures from Damon's birthday party on Friday night ... Actually, it was just a picture of him shirtless and me standing next to him looking stupid.
####### 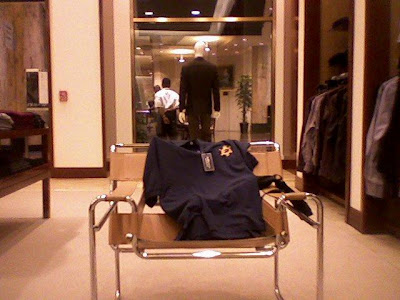 Earlier on Friday, my friend Chris T. took me to a nice lunch at Cheesecake Factory in Friendship Heights section of D.C., and he bought me a shirt at the Saks Fifth Avenue store, pictured directly above and directly below. He spent over $80 on me, including $54 plus tax on a nice blue polo shirt. 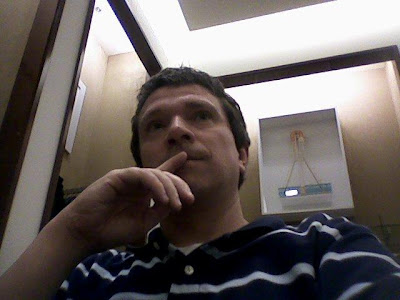 Here I was at the aforementioned Saks store here in Washington, D.C., Aug. 28, 2009.
We first went to the new Bloomingdale's -- which is actually on the Maryland side of the DC-Maryland line at Western Avenue and Wisconsin Avenue. The store is obscenely expensive. 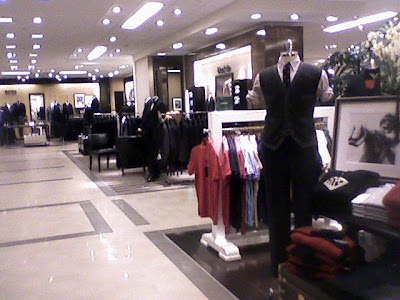 Here is the interior of the store on in the men's section.
Even given the area we live in -- with Potomac, Chevy Chase, and Bethesda so nearby -- I just don't see how in the current economy enough people have that much money to throw away, or access to credit, to buy $500 this or $1200 that in a frickin' clothing store. 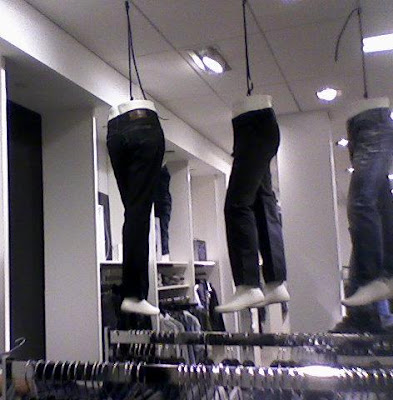 Here is another scene from inside the Bloomingdale's, Aug. 28, 2009
Oh, yes, the opposite end was the nearby TJ Maxx store, where the photo in the previous entry was taken. It is also where I took this picture of pink tutus: 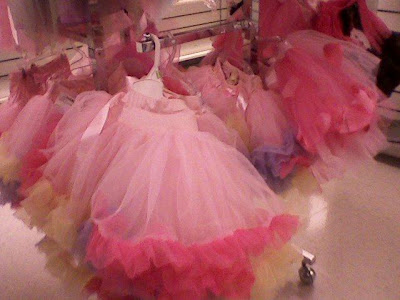 I sent the image to my favorite political blogger Bartcop with the suggestion he post the picture with the following caption: Senate Democrats' Clothing Section. 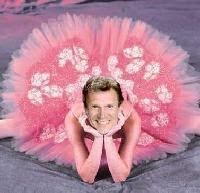 The motivation is that Bartcop has a whole series of "pink tutu" Senate Democrat images that started out 8 or so years ago with an image of a ballerina in a pink tutu that was subsequently Photoshopped (as shown here) with then Senator Tom Daschle's head in place of hers. It basically is a nice picture summary of wussy Democratic Senators everywhere.

But who thought Pres. Obama would cave in so rapidly and totally and, most shocking of all, so cluelessly?? I really have been wishing these days that Hillary had won.
By the way, read this piece by Glenn Greenwald on Salon.com about more WaHoPo stenographic, anonymous-source-quoting whoring for the Powers That Be, this time defending indefensible Bush-Cheney era torture. I wish The Washington Post would go bankrupt -- we'd all be better off.
#######

On Saturday night, I went with Gary and Chris T. out to the wilds of suburbia -- actually, to Rockville to Kevin and Laura's place. There were brief heavy rains and t-storms in Montgomery County but D.C., as ever, managed to miss just about everything. 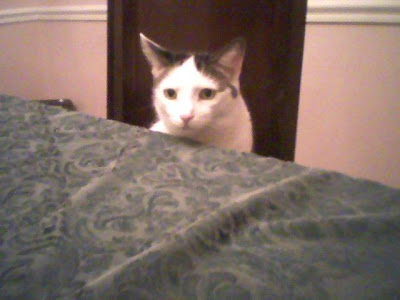 Here is Kevin and Laura's cat, Smithers, peeking over the dining room table. They have another cat, Sideshow Bob, but he almost always hides. Yes, both cats are named for characters on The Simpsons characters.
#######

My next planned entry is for midweek.

Re that picture from Damon's party, I wish you reconsidered:-)

My first day at work after summer bank holiday. I've converted a lot of data from one type of binary format to another and I'm exhausted:-)

(actually the computer did it)

I think it best if I don't post the picture on my blog.

Thank you for your email -- that was your first genuine political diatribe that I can remember!

Art curator: Why haven't you painted the fall of St. Olaf?

Rose: Because it hasn't happened yet, although we came pretty close when New Math came along.

Thank you for not posting the picture. Some people are applying for jobs soon and have to convince others that they are productive members of society.