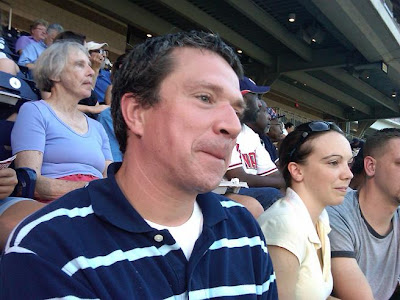 A picture of Yours Truly (me) earlier tonight at Nationals Stadium where I went with my friend Kevin (who took the image).
#######

I had intended to post the remainder of my New Jersey shore vacation pics from earlier this week with only commentary on them. Instead, I ended up writing a topically unrelated entry and I was too tired to then post all the pictures. Instead, I am posting I am a few pictures from earlier tonight at the Nationals baseball game I attended with my friend Kevin, who has season tickets.
I had a very enjoyable game with Kevin, even though (as usual) the Nationals lost, in this case to the Colorado Rockies by 4 to 5. I went there last summer with him on July 31, 2008 and I wrote about it here. 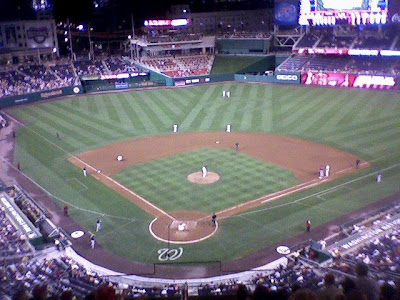 Here is the view earlier tonight from the top tier of the stadium behind home plate.
There is a stunning view of Washington, D.C., and environs from the upper tier and seat rows, but my cellphone camera doesn't capture those kinds of distant things.
#######

Now any trip to Nationals Stadium requires me to write about the ghost of what used to be along the legendary "Unit Block" of O Street, SE, in that hitherto blown out section of Navy Yard in Washington, D.C. I learned of those places in late 1992 / early 1993 when I first arrived in the D.C. area and my friend Brian started taking me there on Friday or Saturday nights. That is, we would "end up ..." there.
I refer to the gay go go dancer bars, X-rated movie theatre, and "health club" that used to be there ... stretching from their beginnings in the late 1960s - early 1970s in a very different world (long before I came to D.C. in late 1992) and running until about 2006. These were opened (probably by stealth and intentional ignorance on the part of the city government) long before the Beautiful Boy 17th Street Gayborhood Existed -- and running until 2005 / 2006. 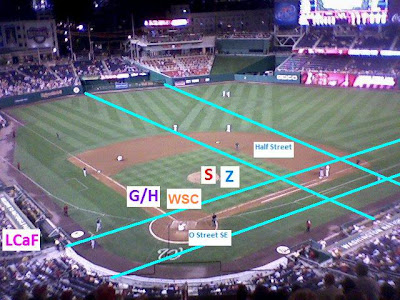 REVISED IMAGE (posted 11:53AM, 08/20/2009) based on Kristof's initial comment: Above is the same image but with my best estimate of where the gay dancer bars, drag show venue, and "health clubs" used to be. The "S" stands for Secrets, "Z" stands for Ziegfields, "WSC" for Washington Sports Club, "G/H" for "Men's Glorious Health and Entertainment" (a.k.a., the "Glory Hole," a gay sex club), and "LCaF" for La Cage Aux Follies, which actually was located just outside the stadium footprint itself.
The above image with overall is actually a revised version of a similar one I made in my 2008 entry. 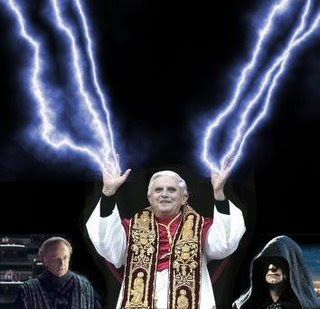 There was an actual papal mass held here in April 2008 by Pope Benedict XVI, and one must ask: How often does a Pope go to a spot that used to be a gay sex club / go go bar district?

I am ignoring the fact that over the decades, probably a third of the older priests in the Washington Catholic Archdiocese and Arlington Diocese probably trolled down there on Friday and Saturday nights, since it is a separate issue.
Sort of.

By the way, S and Z -- which were really the same establishment -- is actually located under the same names on the opposite side of South Capitol Street at Half Street, SW, and O Street, SW. 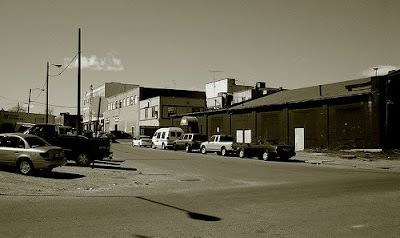 Here is what it used to look like there. This was taken in March 2006 (I got it off the internet last year) shortly before the old warehouses and other structures that housed those legendary, notorious places were demolished and the stadium construction began. 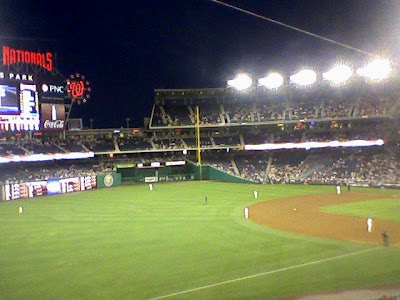 Hurricane Bill is 120 percent certain to do like EVERY frickin' hurricane in the past several years and TOTALLY bypass the U.S. East Coast with the usual right angle turn because some dumb ass short wave comes off the frickin' North American continent and boots the frickin' thing out on a right angle turn to Portugal by the weekend. 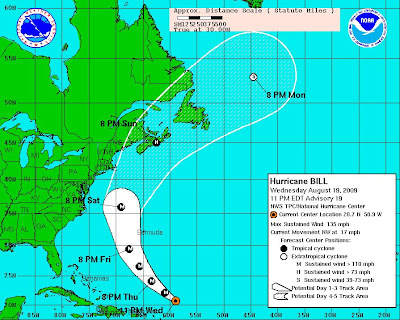 Now I realize all the local and national media meteorologist whore-casters are in a state of ecstatic thrill over this -- they want Atacama Desert like conditions of heat and dryness at all times -- but it's frickin' annoying to me. Among the locals are the Big Giant Head ... the Bitch Who Looks Like a Morphine Addict ... and the Faded Ken Doll. 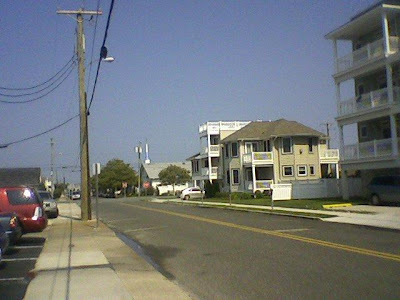 No, it's not that I want category 5 ... or even category 3 ... devastation around here (although I have come to realize that Washington, D.C., is my enemy and not my friend city).
Rather, I just want a decent a tropical storm that brings lots of rain and wind to frickin' useless D.C. Instead, as I have written before, Washington, D.C., the Imperial Capital City, gets no weather and instead is at the center of a "dead shit zone."
Here is an actual stormy scene from just outside the northeastern perimeter of the D.C. Weather Dead Shit Zone ... 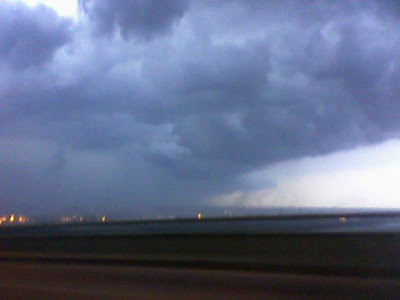 This shows the violently turbulent down-burst from a rapidly moving strong thunderstorm with accompanying rain squall moving west to east, as seen from the Delaware Memorial Bridge, looking north, as LP, Gary, and departed New Jersey. Naturally, by the time we got to Washington, there hadn't even been measurable rain (at DCA), and all was therefore right in the D.C. Weather Dead Shit Zone.
#######

The D.C. Weather Dead Shit Zone: now four years and counting of no meaningful snow and cold in winter time ... shit, not even any nor'easters with rain ... no thunderstorms in summer time ... no tropical systems in late summer into fall ... no nothing ever. Just like my career prospects. 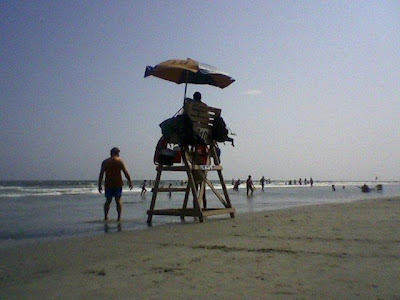 Anyway, I'm signing off now and plan to post the rest of my New Jersey pictures in my next entry, along with why Washington, D.C., the loathsome and infinitely tiresome Imperial Capital City of the Late Stage American Empire, sucks in so many ways, not to mention discussing why my resume with its excessive number of degrees and listed dates of graduation, and possibly even my name itself, are jinxing me. Boo.
I will also talk about my money issues -- including how much I owe all around to so many people and entities and how bad it all is, but not right now.
--Regulus
Posted by Regulus at 2:34 AM

There was actually 'Washington Sports Club' right next to the 'healt club' that you mentioned. Membership was considerably more expensive there but it was a much healthier place than the health club.
Oh... good times. All that is long gone

You are absolutely correct! I forgot that place entirely! I have remade the image to account for the location of "WSC".

I don't think I will ever ever go to that stadium. I don't get sports or papal masses anyway and it would just make me sad. I have a weakness for all half forgotten, border-line, niche places with history that is never quite told. Those drops of fading memory that all too often fall victim to "revitalization" programs with their annoying "buy a cup of mocca and save a child in Africa while enjoying the game" deeply immoral fake neoliberal ideology. I have a profound connection to the now gone Unit Block in SE Washington. My first ever gay club experience was a velvet night at Nation around 1999/2000 (that's not counting a brief visit to a gay disco in NYC in early 1998 which was kind of accidental). My first gay strip club was Wet that used to be located just outside the stupid stadium and where you took me around 2004 or so. I will not go into any details regarding both the health and the sports clubs but yeah, they were part of it. And Z/S was the embodiment of gay subculture as my ex-boyfriend's ex-boyfriend once said. I'm proud to say that I didn't miss the chance to be there on the final Saturday of it's existence (I believe you went there next day which was it's actual final night). And you and I and Gary were at Nation on its closing night. Everyone who's anyone in the Washington gay underworld was there. You just can't buy memories like that. Not for $25 a pill anyway...

Thank you for this blog entry!

Oh God, and Phil was there and that was the night that like 10 of us took a ride packed in Gary's Mustang! Like I said you can't buy memories like that

So how big is the stadium anyway? Like acres? I've never been to one.

That first photo of you is so cute, if you'll forgive the term. ;) Also, I like the Popish one! Very pointed.

Wow, Kristof, that was some comment! I didn't know you felt that strongly about what used to be there in "the Unit Block of O Street, S.E." all those years ago.

I had forgotten about that ride in Gary's old mustang, too.

$25 pills? I have NO idea what you're talking about. Lalalalalalalala ...

Rita -- It's a standard size baseball stadium. I don't know the acreage but it's sort of oval-shaped and maybe 500 feet or so from one side to the next.

Quill -- Thank you for the compliment.