Thoughts of Mt. Damavand and one of my old-style political rants

Mount Damavand, the highest point in Iran, and one of the world's most prominent stratovolcanoes ... 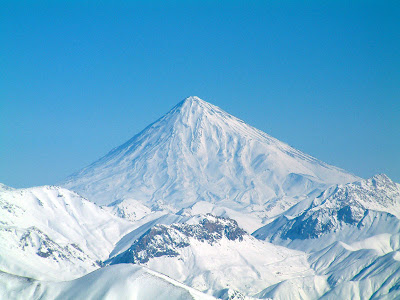 ... Mount Damavand is the highest peak in Iran and is located about 40 miles northeast of downtown Tehran. Mt. Damavand is 5,610 meters or 18,406 feet, the highest point in Iran and the 12th ranked globally in terms of 'prominence.' It is also physically a very beautiful mountain.
The arid climate of Iran actually changes rather abruptly heading north from there to the southern shores of the Caspian Sea. 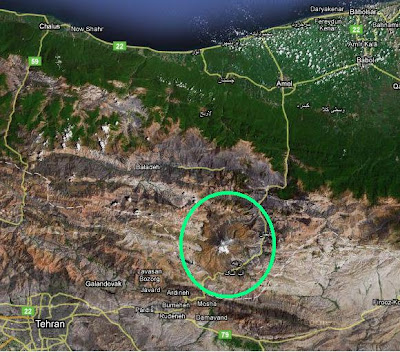 Here is a Google terrain image of northern Iran with Mt. Damavand circled and Tehran in the lower left corner and the Caspian Sea at the top of the image. Note how much greener the terrain turns near the Caspian Sea.
My Russian friend Mike G. grew up in Baku, Azerbaijan, which is located on a strange kink in the Caspian Sea about 350 miles directly north-northwest of Tehran. 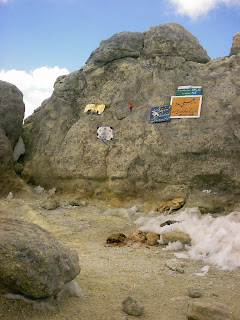 Here is an image of the very tip top of Mt. Damavand in Iran that I got off an interesting Web site called "Damavand Iran" linked here.

Yes, the current unrest in Tehran (but unrelated to it) also has me interested in some of the geographic and topographic features of Iran.

TURNING to the political -- 'cuz I'm in a bitchy mood as I write this -- below is a YouTube clip worth watching. It features a journalist-commentator with OpenLeft.com gives some shitty Fox News troll "reporter" named Griff Jenkins, who likes to "ambush" people in that Fox Nazi News way -- a taste of his own medicine. Jenkins was waiting to ambush people in at ACORN meeting. It's brilliant.
Interestingly, this was filmed on 16th St., right near Scott Circle, which is located about midway (at M Street, NW) between the White House (which spans the area between E and H Streets, NW) and where I live by 16th and U St., NW. I wish I had known this was going on!
#######

Our piece of crap local "newspaper of record," The Washington "Whore" Post, has decided to fire its only liberal blogger from its WashPost.com site, Dan Froomkin.

If any paper deserves to go bankrupt, it is the WaHoPo, which now only exists to be a house organ for the forces of reactionary, Bush-loving intrigue, neocon warmongering, corporate whoredom, enslavement of the working class population (which, in America, is only too happy to be enslaved), and all-around-destruction of all life on this planet. 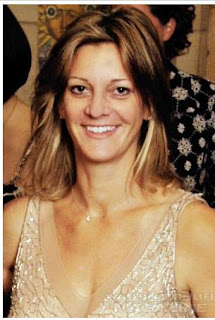 As usual, Glenn Greenwald gets it right and right again and right a third time.

Also, read here as Pres. Obama and wussy Senate Democrats cave in on ANY meaningful health care reform again. Expect the mainstream media -- think Cokie Roberts and David Gregory -- to be "impressed by this."
This whole health care "reform" effort is going to end up as some multi-billion-dollar corporate tax giveaway that does NOTHING and is the EXACT OPPOSITE of what is so desperately needed.
#######

And if you want to see why former Sen. Tom "Puff" Daschle is such a pimped out corporate whore, read here and here. 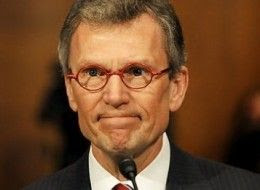 "Hey, that's not fair! My wife's a corporate whore, too!"
But at least Pres. Obama will give a good, but ultimately meaningless, speech. It's all so depressing. Oh, well. I personally never thought he was going to be a Christ like Savior.
--Regulus
Posted by Regulus at 2:49 AM

Nice picture of Mount Damavand, Definitely phallic. Or maybe it's just me. ;)
Seriously, I've never seen a picture of that mountain or even knew it existed before now. It is a beautiful picture.

Right now, I'm taking a break from studying about Oregon Urban Renewal. Something I have to become informed about in the next week, so I can write about it. I like learning about that kind of stuff, but I have to take a break from it every few hours.

Funny thing, one report I read on the subject said that statistics show that gays & even single professional women contributed to what is called "gentrification" in areas that were improved by urban renewal projects.

The phenomenon of gays helping initiate urban gentrification is a well known one. It's common knowledge actually in the D.C. gayborhood here.

Thank you for talking to me on the phone, although I am quite depressed and walking around alone, and going into the grocery store at dusk shopping with my dwindling money only made me feel all the worse. This is especially true as I'm around all the urban yuppies who seem to have an infinite supply of money.

I'm posting a new entry that discusses the details of my finances.

Yes, I thought about your gayborhood when I read the article.

I think you just have a skewed perspective. A change of environment might help.

i find it ironic, that i find stuff out about things from my neck of the woods from your blog...

strangely enough, the roots of our family's existence in baku go to the subtropical like area just north of azeri-iranian border - which would be just of to the west of the satellite pic that you posted. i think, originally, at least part of the family settled there as refugees running from religious persecution...

Religious persecution? What was your family's faith? I didn't know that.

here is a wiki page about my pips -

that only accounts for about a half of me. the other half is a cocktail made of a russian dirt poor peasant from ryazan' region (my last name originates from the dialect spoken there) who joined red army when he was 16 and made his way down to baku as a soldier of 11th red army, a tartar who fell in love with my great-grandmother, converted to christianity and moved to baku (my "asian" eyes), and even a mysterious gypsy... :)

Your pips or peeps??

Seriously, though, I can't believe I have known you since Aug. 1994 (that's nearly 15 years) and until now I had NEVER heard that story.

Baku as Vegas ... Maybe the Baku Tourism Board (is there such a thing?) would like that as a tourism theme or slogan.

yeah, well - as you might have noticed i am not too religious. i think my great grandfather on mother's side was the one who left the religious community. or maybe he just stole their money and ran away - who knows...

anyway, back to present time. :)

i didn't get a chance to congratulate you on your third master's, so, here it is - congratulation, arcturus! hope - third time is the charm, and those idiots who won't hire you come to their senses!

I think these days I'd prefer to be fleeing from Genghis Khan, or even Ivan the Terrible, rather than being forced to live in the place I dread the most, American Office Cubicle Hell ... and if I don't live there, then I can't live at all. What kind of cosmic perversion is that?? (See next entry.)

Have you ever been to Key West? That's where my dad is about to move to.

the cubicle hell? which circle was it in dante's model? :)

one of these days...