A Screaming Riot and Oppression Then, Quiet Desperation and Neglect Now ... 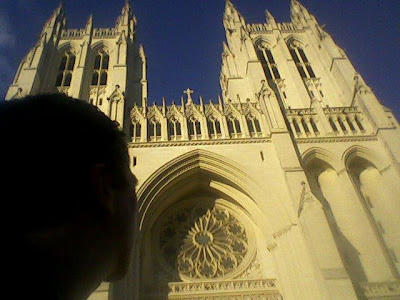 This entry -- a bit altered -- was written on my Mr. Sirius entry. It features a variety of pictures, including those took on walk today through Washington, D.C.'s nicer neighborhoods and two taken by Joe S. at the East Potomac Park golf course on Saturday. We had some heavy t-storms on Saturday that added to the surplus rainfall totals of the wet April - May - June we have been having. 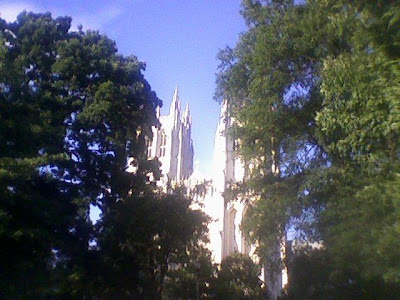 It was a solo walk since Gary was away and Chris T. was with a friend seeing the play Looped! here in D.C. starring Valeria Harper as the legendary Ms. Tallulah Bankhead. He and I met up later for dinner. And, of course, Kristof is away for the long term -- now in London at Imperial College. 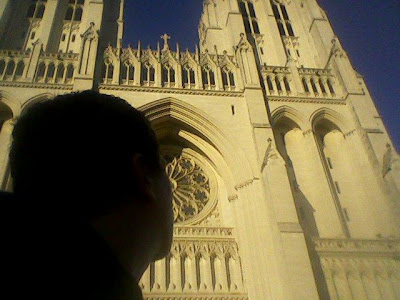 This is a slightly different picture than the top one featuring me almost silhouetted on the sunny western side of the Washington National Cathedral, 7:11PM EDT, June 21, 2009
########

My walk started in Friendship Heights, where I stopped for lunch I bought at the Giant and then talked to my dad to my dad and wished him a Happy Father's Day while seated in the Chevy Chase pavilion next to a fountain waterfall. 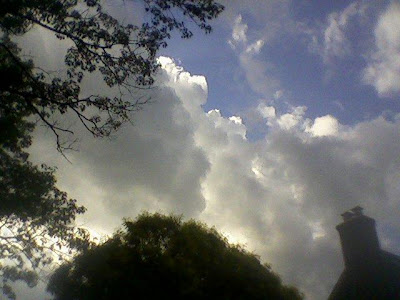 I then walked on a route into Spring Valley -- the above picture was taken at the corner of University Ave. and Quebec St., NW, at 6:03PM EDT, June 21, 2009 -- past those stunning houses in the 4800-4900 block of Glenbrook Rd., NW, I've talked about before. I did not take any pictures this time, though. Instead of walking through Battery Kemble park, though, I headed east to the National Cathedral and then south into Woodley Park and toward Dupont Circle, where I met Chris after his play was over and we had dinner.
#########

Before starting my regularly planned entry, let me say that I'm home on this Sunday night watching WETA, which is actually taking a break from the semi-permanent pledge drives that are now a characteristic of our American Public Broadcasting System (PBS) television. Instead it is showing the 2005 documentary Screaming Queens: The Riot.
It's about a riot in August 1966 at a place (long gone) in San Francisco's Tenderloin district called Gene Compton's Cafeteria. The show is about a protest of transgendered prostitutes in San Francisco in that long ago era fighting police harassment. Thereafter, the situation for them began to change, in part due to the unlikely help of a San Francisco Police Dept. Sergeant Elliott Blackstone, who is interviewed in this program (he died in Oct. 2006).
The Compton riot was the first known act of "collective" queer resistance to legal harassment in the United States, and it was actually three full years before the Stonewall riots of June 28, 1969 in New York City's Greenwich Village, a much better known defining event in the gay rights movement. The Wikipedia write up on the Stonewall riots is quite comprehensive and worth linking to.
######## 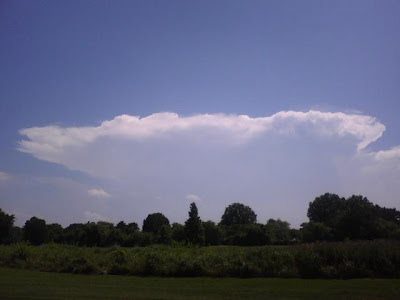 If nothing changes and I do not find meaningful work (by which I mean financially self-sustaining employment) in the next 60 days, then the following set of circumstances applies ...
*I have about $1,600 left to my name with another $640 basically guaranteed from work I already completed and another up to $850 that could come by mid July. Anyway, this money would carry me through to the end of August on rent. I am currently paid up until the end of July. As for daily expenses, I am currently good only until early August.
*I am on the verge of having up to four judgments from collection agencies taken against me for a combined $10,400, and that figure will rise on court costs and so forth. This debt came from what originally was $5,000 or so in purchases in 2005 and 2006, although those "purchases" were food and paying rent. The doubling is because of assorted fees, finance charges, middle men, and the general degenerate corporate whoredom that is America today. 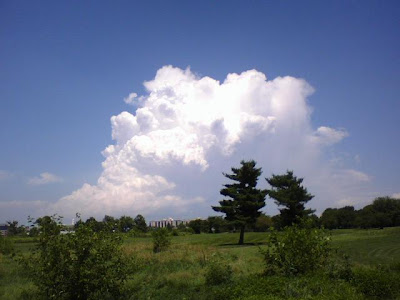 This giant cumulonimbus cloud looks like a rotating supercell. It was probably located just east of the Chesapeake Bay over Talbot County about 50 miles away. This was also taken in East Potomac Park, Washington, D.C., around 3PM, June 20, 2009.
#######

*I have another $2400 in Macy's debt that I have defaulted on initially as a short term protest but now because I am running out of money. It started in May when, following years of being a loyal customer to them and, prior to that, to Hecht's (which Macy's bought out), back to 1994. I didn't even include Hecht's as a creditor in my 2002 bankruptcy. Anyway, I was always in good standing, paying the $50 in finance charges tacked onto the bill every month. But last month Macy's summarily decreased my credit limit to my balance. They did so as a result of a credit check that had nothing to do with them and when I asked they said too fucking bad. Well, fuck them. Macy's can stand in line with the rest of my creditors. By the time they get around to a judgment, I'll be able to do a bankruptcy. 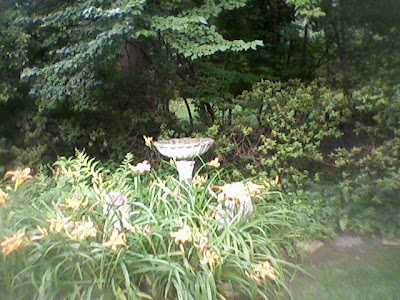 A "secluded" bird bath with two stone sculptures of seated dogs among the flowers (and in-laid marble with names on it surrounding it, not visible in this image), 3600 block of Fordham Rd., NW, Washington, D.C., in the heart of Spring Valley.

#########
*I have no assets whatsoever except the above mentioned checking account, which could face a lien on it, so I have moved some of the money into an account in my dad's name. More generally, I have so little that there really isn't much the collection agencies can "get" from me. There is no regular wage to garnish. I actually have been very upfront and matter of fact with two of the collection agencies (and have not spoken to the other two yet). Whether it helps or not is beside the point but they know what they can realistically expect to get. In my case, I think this strategy of being cooperative actually works since there is so little for me to lose. 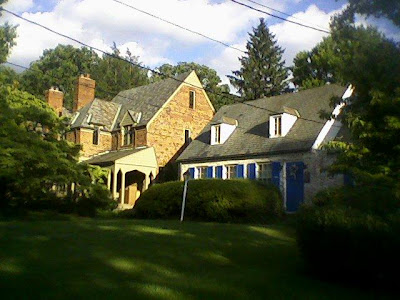 The houses at 3908 (right) and 3912 (left) Macomb St., NW, Washington, D.C., June 21, 2009
*I cannot do a chapter 7 bankruptcy until Aug. 2010 because I have to wait 8 years from my previous one.
*Any judgment or wage garnishment would look really bad for one of the jobs I am trying to get and it would probably nix any security clearance, at least above a certain level. As it is, I am probably not really clearable owing to a few issues in my past (no, nothing criminal, but still couple of dicey things). 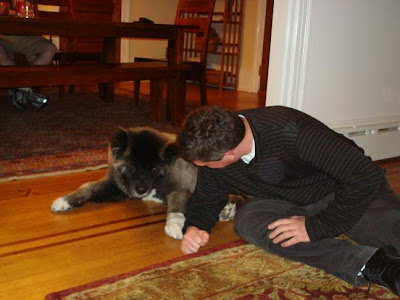 Yours truly, Regulus, and Esau, who looks like a big, fluffy stuffed animal dog but he's a very real Akita. He belongs to one of Phil's sisters and lives in Glen Burnie (near where I used to live back in the early 1990s with my mother and Ray). Phil and Stephanie were watching Esau last month. This picture was taken by my friend LP at their place on Adams Mill Rd., NW, here in D.C.
########

*I have approx. $200,000 in student loan debt that will also be coming due, and this is non-dischargeable in chapter 7, but the new law governing payments limits how much one has to pay (I believe it is 15 percent of gross monthly income, but I'm not sure on that). 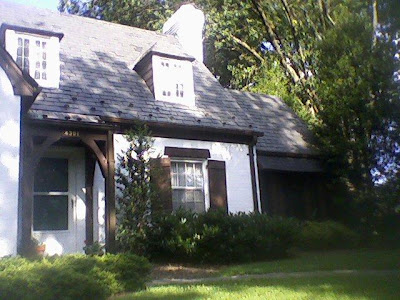 *A chapter 7 bankruptcy next year should take care of the judgments and any checking account liens and/or wage garnishments (assuming I have a wage to garnish).
*About my job search, I have had zero luck even as I have completed my third masters degree, owing to a combination of a bad economy and -- even more so -- my incredible LACK of any social networking connections to get me "in" anywhere. Additionally, things that should be strong points -- a white male with lots of education -- in fact are not helping me at all, esp. in the search for Federal work. The multiple masters degrees on my resume also look kind of weird.
*Applying for work my way -- sending in resumes and applications into the Giant Black Hole that is the internet -- is absurd and guaranteed failure. No one reads online applications. Ever. The game is all rigged.
*America is more often than not a nightmare country.
Mad Dogs or Canes Venatici (Hunting Dogs)?? 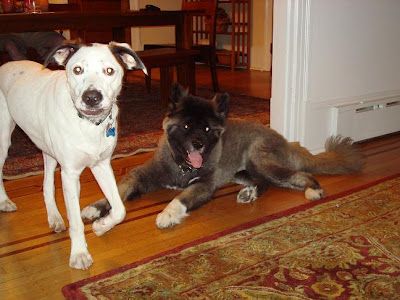 *The reason I was able to do that South Florida vacation is because it was basically free: Spirit Airlines travel is ridiculously inexpensive if you are in their club (as my friend Gary is) and we stayed at his landlord's condo in Boca Raton. It just so happened in both trips there (the one in Feb. and the one this month), we had a friend who traveled with us and stayed in a hotel in Deerfield Beach, which served as a base of operations. As it is, I still haven't paid Gary the $100 I owe him for the airfare and part of the car rental. I am planning on giving him $120 in July. 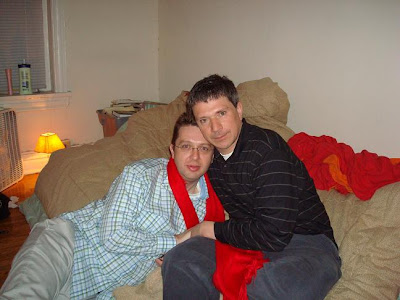 *I cannot realistically live with my dad, even in Key West, even if I run out of money and have to give up my apt. in D.C. I do not know what I will do.
*I am exhausted and tired of how my life has turned out. I am almost debilitatingly depressed. I do not know what is going to happen in the next 3 to 6 months. I may just disappear from D.C. It really wouldn't matter. I cannot find a way here. While I have a few friends who might temporarily help me financially, in the long run, I am failing here and my situation is unsustainable. I am completely lost these days and I cannot find my way home. 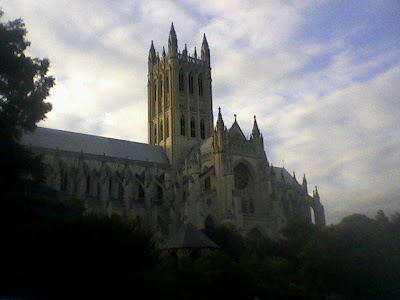 The south side view of the Washington National Cathedral with the central Gloria In Excelsis Deo tower (I think that's what it is called) as seen outside Bishop's Garden, 7:32PM EDT, June 21, 2009.
######

That's all for now. I guess my next entry will be in a few days. As for this week, I have two or three work assignments for my contracting job (one of which I did not finish last week). However, on Friday I reached a senior level NRC staffer who provided me an interview that I needed for one of the assignments. 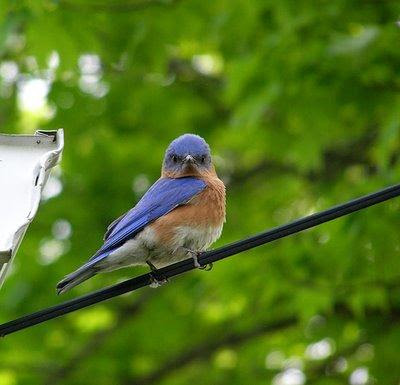 Picture of a blue bird that LP sent me.
--Regulus
Posted by Regulus at 12:25 AM

Let me get this straight: Macy's to whom you have always been loyal did a credit check on you for no good reason whatsoever and subsequently DECREASED your credit limit? I say, don't pay them a penny. F*****g idiots

That is correct. Boo.

Re previous entry and Iran. I'm going to repost something that I've already posted on Facebook. I just think it's important. If you, Reg, don't want this kind of political activism in the comment section of your blog, delete it - I'll understand. this is an Interned -wide campain that my political friends and I are promoting. Here it goes

If anyone is on twitter, set your location to Tehran and your time zone to GMT +3.30. Security forces are hunting for bloggers using location/timezone searches. The more people at this location, the more of a logjam it creates for forces trying to shut Iranians' access to the internet down. Cut & paste & please pass it on.

Interesting, although I never have used Twitter. I use the social networking site Glitter... Ha ha

Glad you liked this entry ... I think.

Hotlipz, it was so nice to see you today and I will write about this is my next entry which I am actually going to try to write tonight before I go to sleep.