"Sanford and Sin", Another WaHoPo Failure, and the Passing of Farrah Fawcett -- (UPDATED) and Michael Jackson 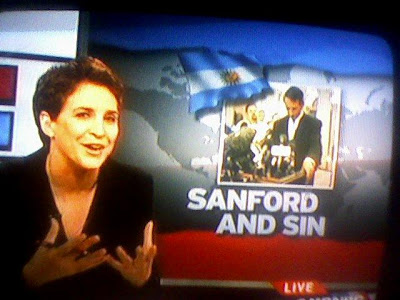 This has been pointed out by Josh Marshall on Talking Points Memo but the degree to which the mainstream whore-media bought the flimsy "Hiking the Appalachian Trail" excuses and lies from the office of loopy, love-struck, holier-than-though philandering Southern GOP politician South Carolina Gov. Mark Sanford while he was missing for five days on his secret trip to Buenos Aires, Argentina this past weekend is truly incredible.

Actually, in this post-Bush Age, it really isn't all that surprising.

The Gold -- no, the PLATINUM -- Medal goes to WaHoPo Style section writer Wil Haygood, whose article entitled "For the Gov, a Little 'Me Time'" that appeared in yesterday's print edition should go into the Media Whore Hall of Shame.
He even compared Sanford to Henry David Thoreau and his 19th Century wilderness jaunts. And all based on the shifting, flimsy lies from the "Gov's" press office. I had to do better than that when I was in journalism grad school.
Phew.

Naturally, the good Mr. Haygood, so ingrained in The WaHoPo's culture of sucking up to GOP power, will probably not even be phased by how stupid and compromised he looks. Idiot.
Naturally, as well, the Graham Family will view him as an invaluable asset. Once again, PLEASE Journalistic God(s), let The WaHoPo go bankrupt. 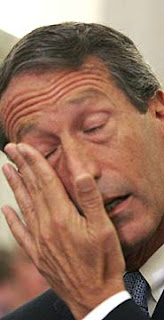 As for the bad Harlequin Romance novel-like emails that Gov. Sanford sent to his Argentine (Argentinian?) paramour Maria, it's remarkable he can't even spell "lightning":

"Three and finally, while all the things above are all too true — at the same time we are in a hopelessly — or as you put it impossible — or how about combine and simply say hopelessly impossible situation of love. How in the world this lightening strike snuck up on us I am still not quite sure."

I think I wrote this to Kristof -- or was it to Mr. Sirius once?? -- when I was drunk. (I think Mr. Sirius spells lightening like that, too.)
The emails -- which The (South Carolina) State had possession of since December 2008 but didn't verify and only published yesterday -- are available here.

Oh, yes, I'm not sure he'll actually resign -- huge hypocrite though that makes him in so many ways, plus the fact he is obviously a deeply troubled person a bit off his rocker. As it is, I'm sure the Protestant fundies who make up so much of the electorate in South Carolina will forgive him. 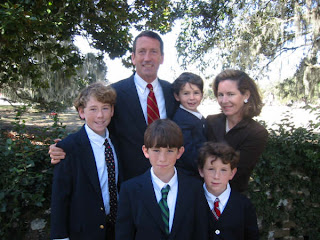 Lastly, as a gay man, I want to apologize that my existence and quest for basic civil rights, including marriage equality, caused the break-up of the good governor's marriage.

On another topic, I note with sadness the passing away of television star and actress Farrah Fawcett at age 62 after a battle with cancer. The iconic 1970s-era blond sex symbol Ms. Fawcett is best remembered for her looks, The Poster (see below), and her role on the campy but enduring show Charlie's Angels. 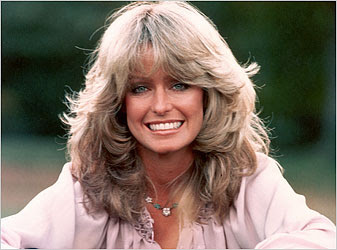 This New York Times appraisal is a nice summary of Ms. Fawcett's efforts over the years.
Excerpt: 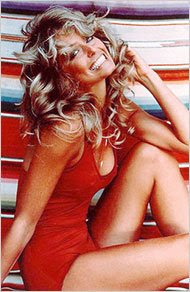 "Though, of course, it was her early work that kept her famous. Nobody in recent memory comes close to the giddy heights Farrah Fawcett reached in the mid-’70s with one season on 'Charlie’s Angels' and That Poster. The pinup of Ms. Fawcett in a red one-piece bathing suit, tanned, head tossed, body lithe yet curvy, was a revelation. She looked delicious but also a little carnivorous, her gleaming white teeth frozen in a friendly but slightly feral smile. That poster ended up on every teenage boy’s bedroom wall and in the annals of pop culture — Farrah was the face, body and hair of the 1970s."

Michael Jackson -- the global mega-super-pop star man-child of the 1980s - 1990s who, I think surpassed even Madonna in celebrity status, and thus is on par with Elvis Presley and the Beatles in their days, and who was as controversial and strange as he was talented -- has died. The cause of death appears to have been a heart attack or some kind of heart failure. He had been strenuously preparing for a "final" British concert comeback tour. 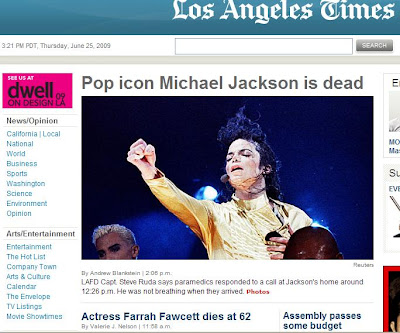 Here is the Los Angeles Times online version screen shot at the moment his death was announced. How weirdly ironic that Farrah Fawcett would die on the same day as Michael Jackson. (By the way, how sad is this, but I actually caught by reloading the page the moment that his Wikipedia article was updated after the L.A. Times confirmed he had died.)
I guess I always had a feeling Jackson would die relatively young, but it's still a real shocker. It seemed like he was doing better lately, the bulk of the weirdness behind him. Jackson was 50 years old.
########

Lastly, unrelated, but since I have been getting so many hits the past two days (by "so many" I mean 31 yesterday and 40 so far today) from Google searches for the latest Matt Taibbi Rolling Stone articles "The Great American Bubble Machine" that is appearing in the July 9, 2009 print edition and is not yet freely available online. 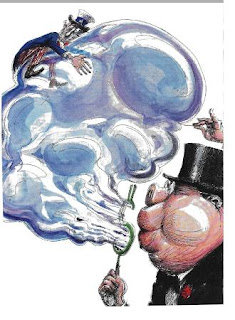 Instead those folks (who aren't even coming to the front page) are instead getting the one entitled "The Big Takeover" from the March 19, 2009 that I posted on this blog on March 23, 2009 Regulus entry. I will post the whole article once I can find it online. (Rolling Stone refuses to make its content available online.)

Anyway, the new Taibbi article is available on the Zero Hedge blog here as a (scrollable) scanned file. Taibbi savages Goldman Sachs in a way only he can -- and that could cause The Washington Post to crap its dainty pants: "The world's most powerful investment bank is a great vampire squid wrapped around the face of humanity ..." and being at every financial bubble and crash since the Great Depression. He ends by saying we live in a "gangster state, running on gangster economics ..."
######

That's all for now. I plan to update this blog over the weekend or early next week.

On Thursday night Pawel and I were in a pub in London's Earls Court area. It was crowded with some German and French people. Pawel, who knows French, overheard their conversation. "They said that Michael Jackson is dead". That sounded so absurd but we rushed home to check the news online and that's how we learnt.
R.I.P

It is very sad.

I missed you a lot this weekend -- this was one of those weekends when it would have been so nice to have you around. Eric and Fanny were in town and I saw Damon, and there was a big party at Phil and Stephanie's Saturday night, which John D. there (it was my turn to flirt with him), and I had a nice lunch on Sunday with a blogger friend Hotlipz (see current entry).