Interim Update: Back from South Florida

So I'm back from South Florida. I went to Deerfield Beach and Boca Raton with Gary and Chris T in a trip very similar to the one I took in February, when Gary and I went instead with LP. 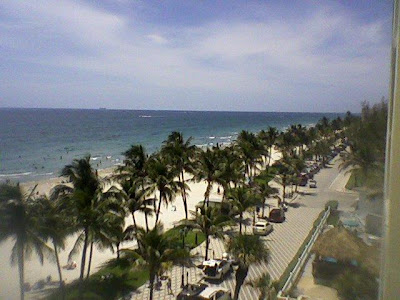 The view from Room 615 of the Howard Johnson Plaza Resort in Deerfield Beach, Fla., 12:05PM EDT, June 7, 2009.
This hotel is where Chris stayed while Gary and I stayed at his landlord Marvin's condo in nearby Boca Raton. Actually, we used Chris's hotel as a daytime base of operations and just slept at the condo. This is what we did in Feb., except Larry stayed at the nearby Comfort Inn.
######

I have 55 or so pictures -- from my less than stellar cell phone camera -- that I can post, though it will probably be closer to 40. However, it is going to take me a few days to get the entry posted. 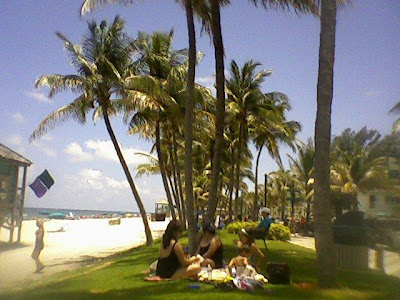 The view from the Deerfield Beach pedestrian promenade (it's not quite a "boardwalk") along the beach, looking south, 12:49PM EDT, June 8, 2009.

#####
I'm home now at this 1AM hour after a bumpy flight back from Fort Lauderdale into National Airport. The bumpy part was the last half hour or so after we were in a holding pattern above Richmond (itself shrouded in clouds) because of storms over D.C. I had a window seat on the left side -- and was treated to the downriver approach into DCA.
I have a lot to do for my contracting job over the next few days, so I may not get a full entry posted until the weekend. However, I also have many unresolved issues involving finance and job search and I have been terribly depressed and it is getting worse. I feel so alone and I have no family whatsoever to help me. 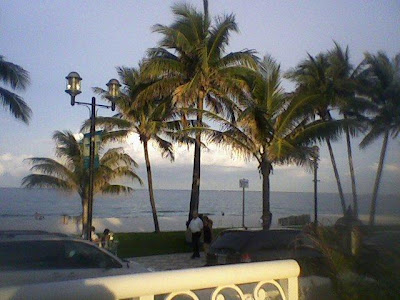 I am a bit sunburned after my time in South Florida, where the Sun this time of year is ferocious, although there were lots of t-storms and scattered heavy rains at times on my trip.

Anyway, I'm really tired and need to go to sleep right now. Oh, yes, I'm scary fat (see picture below) and I need to do something ... mostly, stop drinking and eat better, plus exercise, although without a steady job, I can't join a gym right now. Sigh.
Additionally, I am still upset over Mr. Sirius (or what he means to me), as I believe that he no longer looks at my Mr. Sirius blog but I am going to confine that conversation to inside my head and that blog. 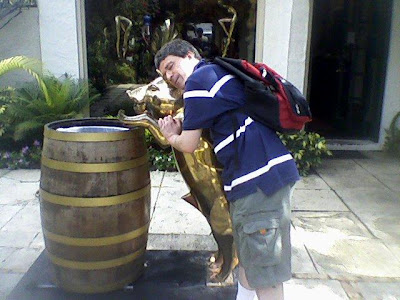 This was taken in one of the little pedestrian alleys off Worth Avenue in Palm Beach, Fla., where the three of us went in the rental car (a red PT Cruiser). Palm Beach's Worth Avenue embodies a VERY different reality than the one in which I live.
########

I plan to have many more pictures to post of my trip in my next entry, but I'll add one more here: 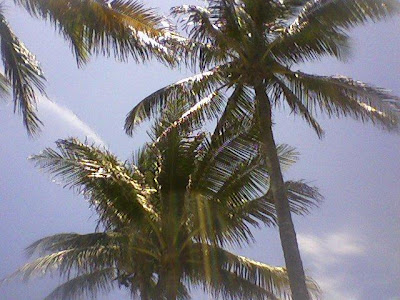 Three coconut palms that grow between the pedestrian promenade and beach in Deerfield Beach, Fla., 12:58PM EDT, June 10, 2009
--Regulus
Posted by Regulus at 1:10 AM