What does this sour cherry tree at ripe fruition in a park in remote Washington, D.C., pictured below ... 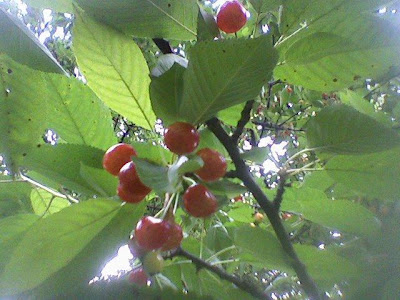 ... and this expanse of Jersey shore at Bradley Beach / Avon-by-the-Sea pictured below ... 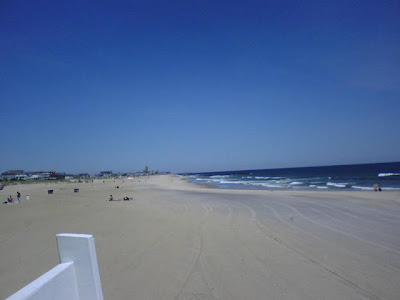 Well, other than the fact both were taken today, June 1, 2009, the first day of climatological season, nothing. Well, that's not entirely true because I basically wait all year to see both that tree at special times of the year, the former when at ripened fruition, and the latter on warm summer days.
Two tidbits: Sour cherry trees are, for some reason, rare in D.C., and the Jersey shore picture above and the ones below were NOT taken by me but by my friend Joe (see below).
########

OK, so today Gary and I took a walk through the really nice parts of D.C., including Friendship Heights, Spring Valley and Georgetown, to find that sour cherry tree -- let's just refer to it as The Tree -- in Battery Kemble park. It is the same Tree that I visited and wrote about on this blog nearly a year to the day ago. 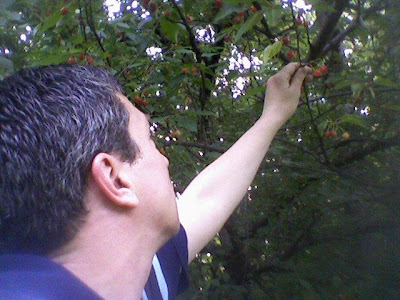 Here is a picture of Yours Truly, Regulus, and The Tree in Battery Kemble Park, 5:07PM, June 1, 2009. It was nice to see that the tree survived another year and is doing well.
Battery Kemble Park is a finger of the Rock Creek Park system that runs through so much of the western half of the District of Columbia. It connects to the part called Glover Parkway, which sort of blends in and heading south becomes Archbold Parkway. 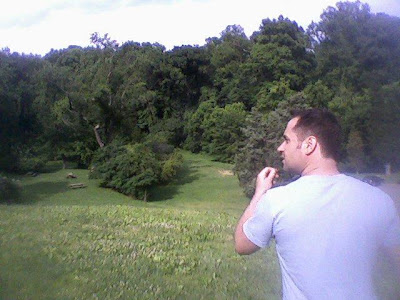 Here is Gary in Battery Kemble Park coming down the hill from Chain Bridge Rd., near The Tree.
Of note, I MAY actually take this walk again on Wednesday with Chris H., but that's not certain. The tree should still have ripened cherries on it.
To get to this spot, Gary and I walked from Friendship Heights Metro via Friendship Heights and Spring Valley, that VERY upscale part of D.C. that I have written about on a number of occasions, including recently (since I walked through there with Chris T. about 11 days ago). 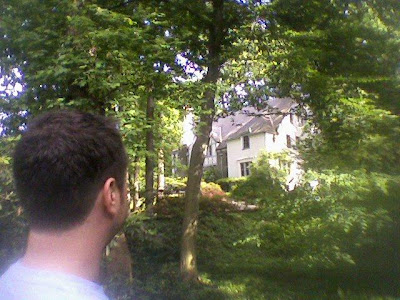 Here is Gary with the house and yard at 4900 Glenbrook Rd., NW, in the background late this afternoon. Even though the houses in Georgetown can be worth more because of their location, to me this is the most upscale and lovely part of Washington, D.C.

We continued our walk via some muddy, sloping forest paths and into Georgetown and thence to Dupont Circle. In all, it was about an 8 mile walk.
#######

As for the Jersey shore part, I wanted to post some Jersey shore pictures that my friend Joe took while visiting there with his wife, Ana, yesterday and earlier today. 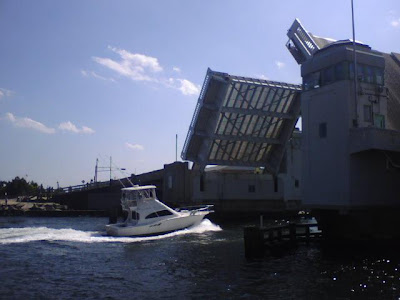 Here a yacht goes under the elevated Ocean Ave. drawbridge into the Belmar Inlet from the open Atlantic Ocean, 3:48PM, May 31, 2009 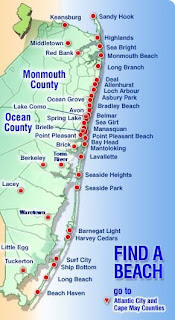 Joe and I are both from the central Jersey shore area, specifically, coastal Monmouth County. Joe is from Bradley Beach, where he was raised in the 1980s, while I am from nearby Long Branch, where I was raised in the 1970s by my dad and grandparents, and along with Sea Bright where I spent my 1980s teenage summer years.

The map on the left shows the location of these places.

By the way, while speaking of the Jersey shore, last week I saw this weird disaster movie on the Hallmark Channel called Killer Wave that features an opening scene nighttime tsunami along the Jersey shore, as well as one along the coast of Maine.
Here is an embedded YouTube clip of the tsunami scenes:


The movie is in the spirit of those 1970s disaster movies, except our era involves truly bad CGI special effects and global warming related disasters such as rouge mega tsunamis that are somehow also due to human terrorism.
The movie was made in 2007 and is a surprisingly violent one toward the end, esp. given that it was on Hallmark, which (along with WE) shows The Golden Girls. I mention this because Hallmark is so sensitive that it even silences out words "ass", "hell", and "damn" on reruns of The Golden Girls.
Speaking of The Golden Girls, here is a screen shot showing the episode "My Brother, My Father." 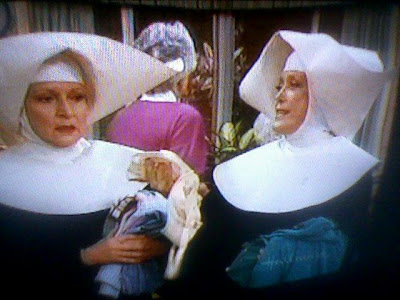 My favorite lines from this (with Rose and Blanche pretending to be nuns for the sake of Dorothy's visiting uncle Angelo, a priest:
Rose: "I'm Sister Rose."
Blanche: "And I'm Sister Blanche. We're here" -- realizing she's holding a bra and underwear she's holding -- "collecting lingerie for needy sexy people!"
Anyway, as for the movie Killer Wave, it actually gets rather difficult to follow. In terms of special effects, the ocean drawback is FAAAR too fast, and the sand would never be instantly so dry even with stranded live fish flopping around. I also don't think the folks would be so clueless as to what that ocean drawback meant. Lastly, the movie considers Asbury Park as the "Southern Jersey Shore." Well, as you can see on the map above, Asbury Park (just south of Long Branch and north of Bradly Beach) is more on the upper Jersey shore.
As for the Maine coast tsunami scene, it's probably well done for a single 100 to 200 foot wave. In fact, though, there would certainly be multiple waves. Also, the boat "going over" the tsunami is a stretch because the forward force of the wave would dwarf the boat's power. It would be like hitting a brick wall
Well, upon reflection, I guess it's a silly movie. 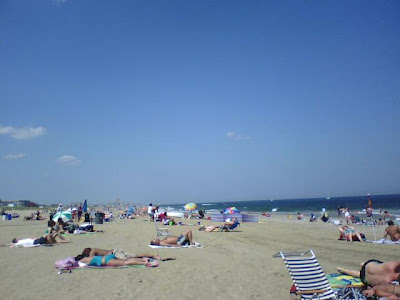 The Jersey shore as seen from Bradley Beach in nearly the same spot as in the top (second) image but a day earlier, May 31, 2009 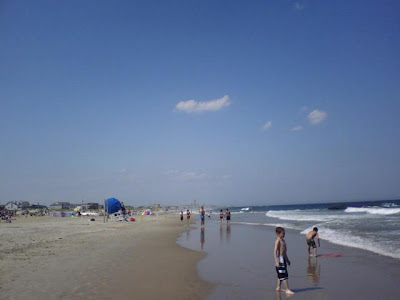 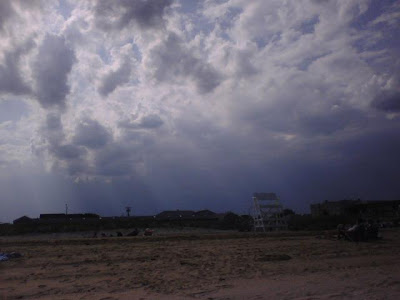 Lastly, here is a picture of some instability rain showers moving in from the west, Bradley Beach, N.J., May 31, 2009.
I think my mother used to have me to go a babysitter in Bradley Beach WAAAAY back in the early '70s when I was very young, before she left for Belgium (and later Texas and then Maryland, never to return).

Speaking of the seashore, I'm going to Florida with Gary and Chris T. this Saturday for a five day visit to Deerfield Beach / Boca Raton.
##########

Anyway, as for me and my life back here in Washington, D.C., while I remain mostly unemployed, I got another assignment from my contracting job that involves going to an all-day symposium held by the George Washington School of International Affair's Space Policy Institute (SPI). It is entitled "Aligning Policies and Budgets." I have to get up early and be there by 9AM. 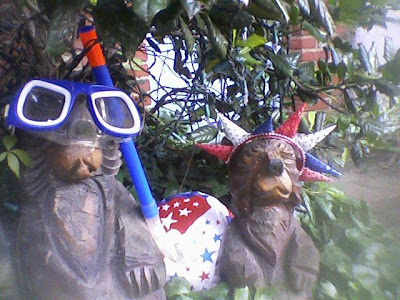 A whimsical scene I saw outside the small house at 1513 27th St., NW, Washington, D.C., at the edge of Georgetown earlier this evening. These are two wooden carvings that someone dressed up with a snorkel and a Statue of Liberty crown.
That's all for now. I plan to update this blog before my Saturday trip.
--Regulus
Posted by Regulus at 8:30 PM

for some reason i did not realize that you and joe shared hometowns, sort of...

i am fascinated by the tsunami waves. but not afraid of them for some reason - probably because they are way out of the ordinary. now, the sharks :) and mid-air turbulence - these are the two things that can make my vacation time almost unbearable... :)

You're not afraid of them for the same reason you aren't afraid of an asteroid strike -- the odds of it happening and claiming you are negligible. The danger from sharks is very tiny, but significantly greater than the tsunamis and asteroids, esp. if you swim in the ocean. The danger from mid-air turbulence and what it can do to a jet is much greater.