Some of the pictures posted here were taken yesterday by me while walking on the Capital Crescent Trail from Bethesda back into the District, and then in the Palisades section of D.C. 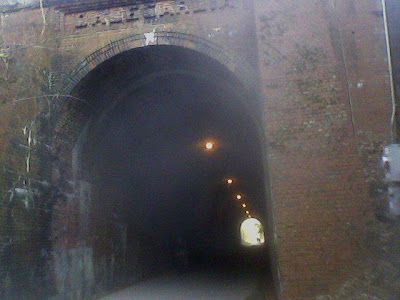 I really want to apologize for giving short-shrift to my Regulus blog in the past few months.
The problem is I only have a finite about of "blogging" in me and I have been putting too much effort into my Mr. Sirius blog. I realize this is incredibly stupid on my part. Perhaps it is appropriate that it is April Fools' Day as I write this. The only upside is that I have not mentioned him as much on this Regulus blog. 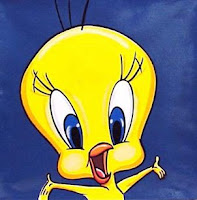 I have written some funny things about him on that blog (which I don't think he reads). This includes parodies of his daily Twitter "tweets" ("MY GOD! I'M GORGEOUS EVEN AT 3AM!") and the courses he should take now that he is going to graduate school (EGO601, BODY603, RUDE640, and VISA701).

As for Mr. Sirius, I think 8-1/2 years of this is enough and it's time to forget him, esp. if I am in fact leaving D.C. I honestly wish I never met him or ever heard of him. As it is, I fully realize all this attention I pay to him isn't even primarily about him but rather is a weird inverted reflection of my own sense of failure in my now 17 year long D.C. area life.
######## 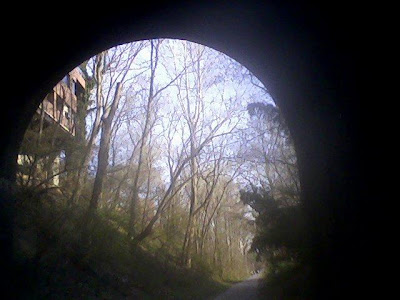 The south side entrance of the Dalecarlia Tunnel that is now part of the Capital Crescent Trail, March 31, 2009; there were scores of bicyclists on the trail whizzing past.
It made for an occasionally annoying and jarring experience. I wouldn't want to be on this hiker-biker trail with any small children running about. That's a nasty accident waiting to happen.
#########

All that aside, I will put more effort into my Regulus blog (which has actual readers) and let my other one go semi-dormant, although I won't delete it. I've already deleted too many of my blogs.
######### 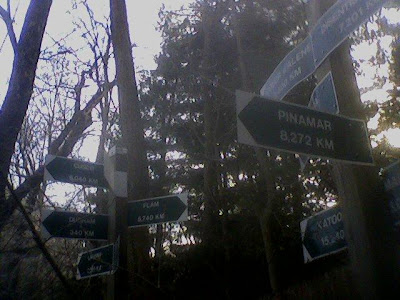 Here are two totally incongruously distance signs -- intended to be humorous -- showing how far in kilometers (that tells you it's an upscale, progressive neighborhood) to an assortment of randomly placed, weirdly named towns on Earth. This is located in a thicket of bushes off the Capital Crescent Trail in what is still loosely unincorporated Bethesda. The places include Plam, Katoomba, Durham, Coeur d'Alene, and Pinamar, among others.
#########

Below is the email I sent to one of the administrative staff in the Maryland Public Policy School who deals with student graduation issues. She had sent out an email giving the UMCP and the policy school commencement dates (May 21st and May 22nd, respectively, the latter being a very bad anniversary for me, but enough of that topic). I'm NOT attending the ceremony for the reasons given below. This will be my third masters degree.
Date: Wed 1 Apr 16:12:09 EDT 2009
From: [regulus]
Subject: Re: May 2009 Commencement Information
To: ####

I just wanted to let you know that it is highly unlikely I will be attending the actual graduation ceremony. For starters, I haven't gone to ANY of my graduation ceremonies in college (that's 1 undergraduate and now my third graduate one). My high school graduation experience soured me on them.

Additionally, the only family members I have who would attend are my parents, and my dad is in Florida nad my mom, while in Maryland (near Baltimore) would be unlikely to want to attend during the week owing to heavy traffic. 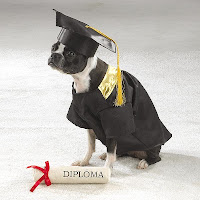 Finally, I'm not going to buy pricey caps, gowns, and other stuff that I'm only going to wear once. The actual degree doesn't even arrive until some weeks later. Thus, in a range of ways, it does not make sense for me to attend this ceremony. Please know that these are my own set of personal issues and it is NOT my intention to make the policy school look bad by not attending. 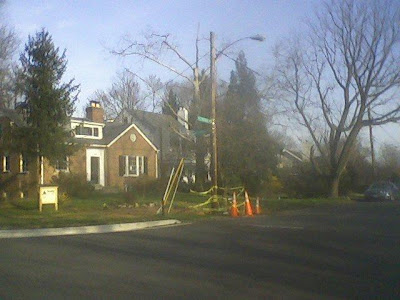 So I made it to the gym -- FINALLY -- on Monday and over the course of 2 hours had a decent pair of cardio workouts, a bit of weights, and a swim in the pool. The cardio included my first jog on the treadmill in years and I'm glad that I can still do it. However, I remain overweight by about 15 pounds (nearly 170lbs) and flabby around the middle, not to mention possessing an overly gelatinous bubble butt on which (when I arc my back), I can balance my book bag.
Just sayin'... 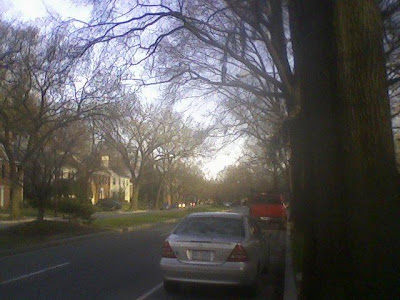 I collected what may very well be my last paycheck for services rendered to my former employer. (That's why I was in Bethesda yesterday since I went there in person.)

I refer to that dreadful fluorescent-lit cubicle hell consulting company in Bethesda that I couldn't STAND even if leaving there means being unemployed with no other options (remember, it's ME we're talking about and I don't get hired), penniless, moving from D.C., and eventual death (!).
Gee, I'm an upbeat person.

Please know that I am beginning to look for an actual job. 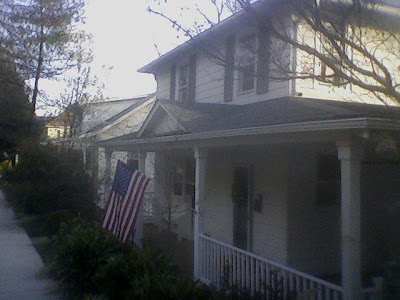 The house at 5706 MacArthur Blvd., NW, in the Palisades section of Washington, D.C., March 31, 2009.
##########
Now that I've pre-paid my rent through the end of July, it's time for me to divide my remaining money (approx. $4500 after paying my April bills) into three "tranches" (so to speak). The first will be in my existing account, the second is in a new account, and the third will be elsewhere in cash. This is to avoid any collection agency liens on my existing account. 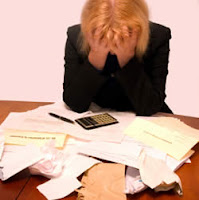 Remember that I cannot do a chapter 7 bankruptcy until May-June 2010, since I have to wait 8 years since my last one. I emailed Tommy Andrews, my previous bankruptcy lawyer, with some questions, but he ignored me and has not replied. My emails and calls to pretty much EVERYBODY are so ignored.

But this is esp. annoying, since not only did I throw some other business his way (in fact, TWO people, as I recall), but when it came to my case, he actually showed up late.

I was already in front of the court's bankruptcy official when he walked in on that soaking rainy day nearly 7 years ago. Anyway, as he has ignored me outright, assuming I'm still in the D.C. area next year, I'll just go to another bankruptcy lawyer.
############ 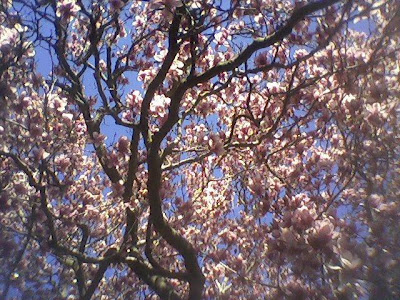 Today is a gray, coolish, drizzly day. I THINK that Gary, my Cobalt bartender friend C/H, and I are going to try to take my annual NIGHT walk down to the Tidal Basin when the Japanese (Yoshino) cherry trees are at their floral peak, as they are now. It has become my custom to do it at night rather than when it is mobbed during the day. The blossoms at peak at night resemble a snowy forest. 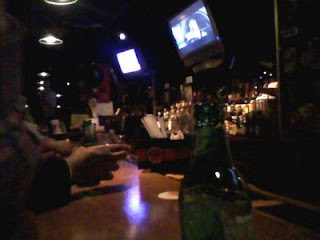 However, it continues to be drizzly and showery and for the third year running, I think such a planned walk with C/H will be nixed. Nevertheless, I may do the walk by myself anyway. The three of us are supposed to meet at Stan's first, a weird, subterranean bar/restaurant at L St., NW, and Vermont Ave., NW.
I think that's all for now. Again, I will try to be more diligent about updating this blog.
**Note that the paragraphs in this entry are fully justified. This is a new ability that Blogger has just added, or at least that I've now noticed. **
--Regulus
Posted by Regulus at 4:26 PM

I think the star you were asking about (on my post)is actually venus...though i am not sure.

Well done getting to the gym!

Thanks for the pix. You are not fat!! Good luck on the job hunt.

Warning you in advance (I will try to behave) I might be odder and more bothersome in the next week or two. Dad went off to Maine last night to visit my brother, don't know when he's coming back.

No Dad, no doggies, empty houses, I'm all by myself. Who'd have thought I'd feel so lonely so quickly.

Bryan -- "Warning you in advance (I will try to behave) I might be odder and more bothersome in the next week or two..."

You thrive on odd and, to the extent it accompanies it, bothersome.

OK, without seeking to invite as a reply some huge dissertation about why it would have been impossible, it seems to me that a trip to Maine would have done you some good, too.

**waves** From lovely Roebling, NJ. Just patched up a computer and burned cd's for my friend so it wasn't all sitting on her 'puter. Silly girl. She's wonderful though.

Doesn't smoke, so I keep wandering outside, don't want to stink up her house... she just got it redone. We're off to NYC tomorrow morn. That's why I'm sleeping here.

This is going to be exhausting!!

Can I congragulate you prematurely for your third Master's degree? Gosh regulus that is awesome! I hope you are able to gloat a little bit about it. You certainly deserve to.

Wish you could have been there with us. You'd have liked/understood it. The show was soooo darned funny. Toxic Avenger-The Musical. New Jersey's first Super Hero! "New Jersey! If the polloution doesn't get you, the aroma will!!