Thank GOD we're finally getting some rain and cooler temperatures ... ANYTHING to wash all that pollen out of the air. I've been in agony, not to mention hopped up on various antihistamines. 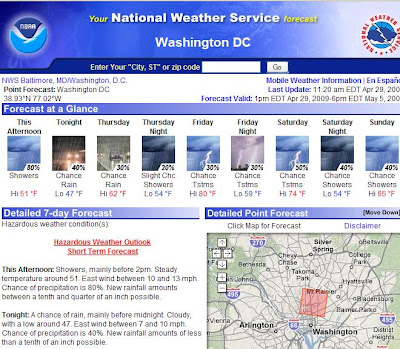 Here is the five-day panel forecast issued earlier today by the NWS folks at Sterling (LWX) for the District of Columbia. The forecast box includes where I live.
########

Changing subjects, I've actually been rather sad and disappointed that I never had the chance to meet Bea Arthur in life. She died this past Saturday at age 86 (and there is not going to be a funeral). I was miffed she didn't attend Estelle Getty's funeral, but I really had no business feeling that way. I'm sure she had her reasons.
Anyway, the best I can now do is view clips on YouTube of interviews and comedy skits that she did in the past. I also I came across this funny image of the late Bea Arthur pictured as Jesus: 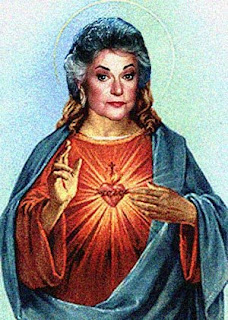 Ha ha
Here is a nice YouTube clip of when Bea Arthur was on Rosie O'Donnell's show and Rosie sang to Bea the Maude theme song "And then there's Maude":

I think this was recorded in 2002 (the final year of Rosie's show). It includes as well that clip from the legendary All In the Family episode in 1972 where the character of Maude Findlay -- Edith's cousin -- is introduced. That one appearance prompted Norman Lear to give her her own show.
And here is Bea Arthur with the marionette Madame from 1980 doing a shtick routine involving Madame's lust for Rock Hudson (how ironic on multiple levels is that) and then singing: "A Good Man is Hard to Find":

The local D.C. gayborhood story is that Madame's creator, the late Wayland Flowers (who had the same birthday as I, Nov. 26th) supposedly got the idea for Madame in the mid-1960s from a lady who is still alive and still is involved with Annie's Paramount Steak House on 17th St., which, by the way, is obscenely overpriced.
######## 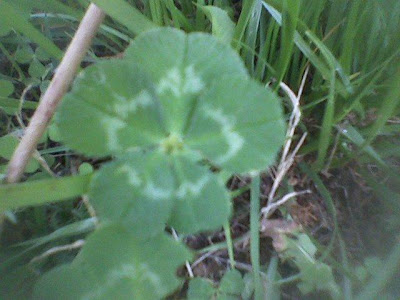 Oh, yes, I found a FIVE-LEAF clover (pictured above) a few days ago on campus near Millard Tydings Hall. Does that add any extra luck?? I've always easily found four leaf ones but the good luck part never quite seemed to follow.
I'm actually suddenly busy with assignments for my contracting job, so that's good for me financially and psychologically, except I really need at some point I need to spend several days working on stuff for my single remaining class (see previous entry) ahead of my scheduled graduation / completion next month. Oh, yes, I made it to the campus gym twice this week so far, including swimming, so that's good.
####### 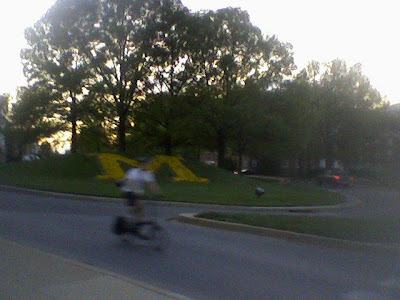 A biker whizzes around the "M" roundabout on the main campus entrance/exit, University of Maryland, College Park, at dusk after an unseasonably warm spring day, 7:57PM, April 28, 2009.
#######

Also, I had a preliminary pre-screening sort of job interview today by phone for a climate change and energy analyst position. I was disheveled and in my t-shirt and sweat pants and socks for that one. CLARIFICATION: It was a phone interview, so I was home in my apartment.
Today I am not going to College Park but rather to Bethesda into my old office to pick up a check for $280 and go over the details of a previous assignment. Thereafter, I guess I'll take a walk.
--Regulus

Why would you go to an interview dishevelled and in track pants??

Because it was a phone interview and I was home in my apartment. I should have said that in the entry, shouldn't have I? No, I haven't flipped my lid quite that badly, at least not yet.

I think I'll update my entry to reflect that.

Thank you for actually reading it -- my readership has fallen to near zero lately -- and asking.

I went to the gym three times this week, and went swimming each time, too. Yay.

well then, it mattered not at all what you looked like then.

I have taken up Bikram Yoga. Its absolutely wonderful.
Diabolically hot, but wonderful.

My brother found a five leaf clover a few mths ago & gave it to me. My luck has been pretty good, so...

Actually, it makes me think of mutations caused by pollutants or nuclear fallout more then anything good. I put about as much stock in luck as i do in prayer.
Guess what?! I'm in the play again this year. Someone dropped out & I happen to have the time available. Never mind they've been rehearsing for two mths. already & opening night is the first weekend in June. Hows that for pressure?

Rita -- Congratulations on being in the play again.

No, I don't five leaf clovers are due to nuclear fallout mutations. I mean, I can't prove it but I rather doubt it.

What about three-eyed fish?