Darned If I Know -OR- More Inchoate Blog Pondering 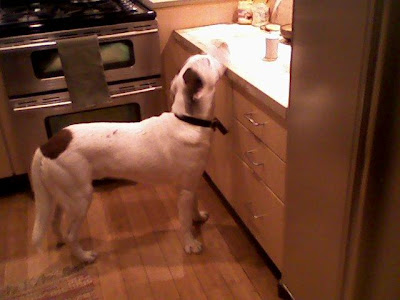 Last night, I met my long time friend Mike G. at Larry's Lounge as he was here in D.C. and free for the evening. Then we went to Phil and Stephanie's where there was a social gathering. It was a very sophisticated sort of gathering: poker and pay-per-view UFC watching, neither of which particularly interest me, but instead it was more of a party social thing. 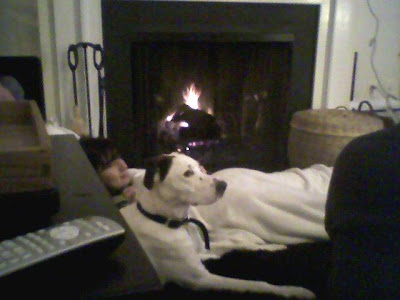 Here Stephanie reposes by the fire with Oliver nearby.

I ate some food (pizza and chips) and did several Patron tequila shots with lime and salt in the proper order. I also had that Captain Morgan dark rum with Coca-Cola. That was pretty good. There was no ginger beer, so I couldn't make a dark and stormy. 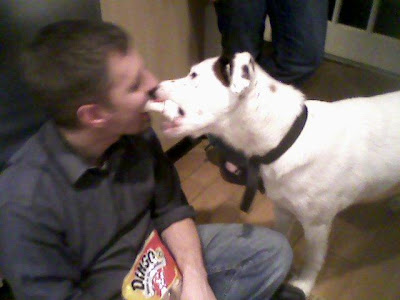 Here Phil and Oliver bond. I think this is how Victoria Stilwell recommends it be done.

Thereafter, Kristof and I walked from Phil and Stephanie's place in Adams Morgan over to Cobalt.

Thereafter, I came home briefly, only to go back out to a straight place I rarely go but that is popular in D.C., the Black Cat on 14th St., NW, where there was some gay event.

I may have seen Mr. Sirius in the darkened, crowded, music blaring room, but I'm not sure. It was only for a fleeting instant. I think it was actually just in my imagination.

Speaking of His Lordship, I've been daily updating my Mr. Sirius blog lately in a silly, school girl, reactionary sort of way, that makes me seem even stranger than I really am.

Anyway, I walked home around 230AM and could not get into my apt. building because either the key or the key lock is screwed up. Someone actually opened the door on their way out and said he'd been having problems, too. For some reason, I got mad and called up the property manager's office number and left a message. It wasn't a nasty message, although I think I better leave another one explaining that I was frustrated. I'll leave out the drunk part.

I was partly irritated 'cuz earlier I received in the mail my annual rent increase notice: it goes up $30 a month to $953/mo. Actually, this is only about a 3.3 percent increase. It was nearly double that last year.

Thereafter, I called up Bryan on the phone and talked for nearly 40 minutes about sundry stuff. 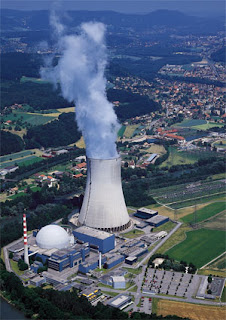 Next week, I have to get into the regular groove of school and some work for my job (recall I'm a freelance contractor now with them and it is much better, albeit with less money and no benefits). I'm supposed to go to an all day workshop on Tuesday at NRC headquarters in Rockville on nuclear power plant safety culture. It was originally scheduled for last Wed., but was canceled because of our first minor winter weather event of the season.

The forecast models have been showing the potential for a moderate snowfall on Monday night into Tuesday, although they keep flipping back and forth with the coastal low's position and strength. Any snow would probably cancel it, 'cuz that's how it is here in the D.C. area. This could actually adversely impact me to the tune of an equivalent of a whole paycheck since that's how much this project is worth IF the workshop is not rescheduled or if the client (in Japan) opted not to carry through on the project.

I continue to ponder Australia these days and I so want to visit there. 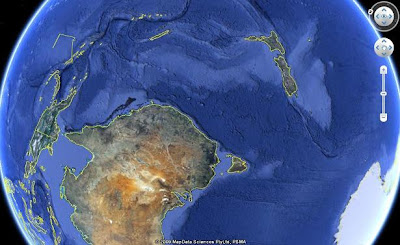 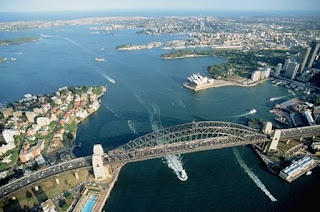 Perhaps I'll show up in Sydney for a visit and startle my blogger friend Fifi. Somehow, I don't think she'd appreciate that...

Above: an aerial view of Sydney Harbour with the famous bridge and Sydney Opera House clearly visible. 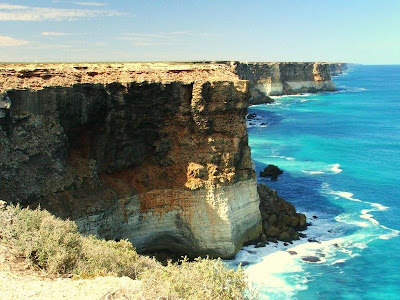 This is somewhere along the Great Australian Bight somewhere near the South Australia - Western Australia border, but otherwise with no significant towns nearby.

This looks over the edge of the (stormy) Southern Ocean and toward what are called the Roaring Forties, the Furious Fifties, and the Screaming (or Shrieking) Sixties, referring to the weather patterns and stormy seas that ring the Antarctic continent.

These are associated with the planet-encircling Southern Ocean with its circumpolar current and the Antarctic polar vortex that isolate and make so extreme the climate of Antarctica. 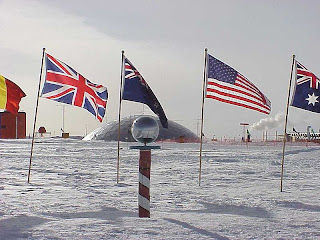 Speaking of Antarctica, maybe I could even go to the South Pole itself and stand on/at it and slowly turn myself counterclockwise (in the opposite direction of the Earth's rotation as it would be sensed from 90S) and -- voila! -- after 24 hours, I would have stood on the Earth but NOT ROTATED AT ALL with it. (This excludes the Chandler Wobble, but let's not get too technical.) 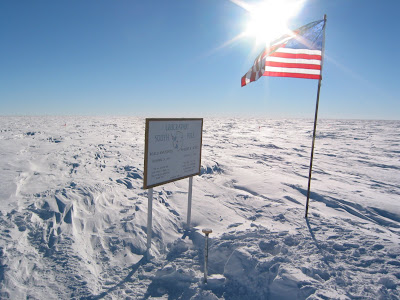 The 9,000+ feet of ice slowly moves (approx. 10 meters per year) so the actual geographic pole position (pictured above, marked with the flat topped metal stake in the ground) is recalculated each January 1st.

I'm not actually going to do that.

Some guy (Guido van der Werve) did that at the North Pole (turning clockwise) in April 2007, only that's harder since the sea ice floats all around there and you can never actually mark the Pole for more than a few minutes..

I also continue to ponder my lost New Jersey childhood. Maybe that's one reason I sometimes call Bryan, as he lives in New Jersey.

We were talking about a lost diner located along Rt. 35 in Neptune, N.J., (the town I was actually born, not to be confused with the Planet Neptune!) called the Ocean Circle Diner and Ritz Bakery and Restaurant (the place appears to have had two names). It is pictured here: 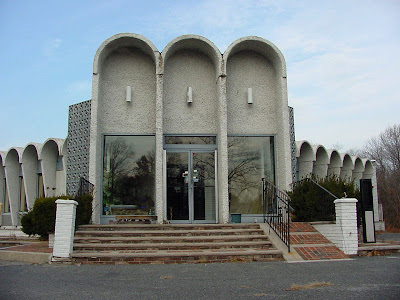 I recall it from VERY early childhood because of its distinctive (that is, hideous) 1950s-era architecture, and because I recall eating there with my mom and dad on occasion.

According to this entry (scroll about half way down) on the New Jersey Beach Blog (a Web site dedicated to "the party scene down the Shore"), this diner was torn down in June 2007. 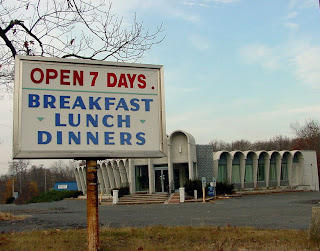 Here is info and more pictures (including this one) on the Ocean Circle/Ritz Diner from a Web site "Lost Des - tinations."

I can't get back to the past. It's lost forever, yet I can't accept that. I wonder if we just relive all of this all over again, cycling endlessly through eternity. Or would there be variations? Or is this a one-time express shot through? Or is this all an illusion and none of it exists.

That's all for now. I'm going to meet Kristof and/or LP later today.

My next update may not be until Wednesday, unless we in fact get a noteworthy snowfall by Tuesday.

Let me assure you that you would NOT wish to be anywhere near that scene you have included, as the entire southern slice of Australia is currently in the grip of a prolonged heatwave, and the temperature during the week has strayed between 40 and 47 celsius. Thats as high as 116 F. Not nice.
There's a reason there are no towns nearby...it's so inhospitable.

Here where I am it is a tolerable 30 today. Thank God.

The dog looks like it is going to be a good friend already.

I realize that much of Australia has a summertime hellacious climate. For better or worse, precisely straddling the vast Southern Hemisphere subtropical belt (except for its northern regions that are in the tropics proper), Australia sits in the subsidence zone where the world's deserts are principally found.

In Australia's case, the deserts aren't confined to the western fringe of the continent (i.e. the eastern edge of an ocean basin), but rather sprawls over much of the vast yet oddly isolated continent-sized island that it is.

So, bottom line, I know it can be hideously hot place. That probably explains, at least in part, Rackorf's personality. Ha ha.

I was actually surprised that Sydney gets as much annual precip as it does.

All that aside, I still want to visit the country. I'll just come in the winter months, which would have the added benefit of getting me out of the soupy, toilet-smelly, torpor of Washington in July or August.

I mean, hideously hot AND dry, not humid, with scorpions and God-knows-what scurrying around the Outback and the deserts. THAT is probably what explains Rackorf's Aboriginal distemper.

no, autumn is nicer.

Sydney is very humid at the minute. I get so filthy at the studio, I feel like a blacksmith or something.

Oliver is a great dog and I hereby pledge to never ever feed him anything I'm not supposed to ever again. I just wanted him to like me more than he likes others:-)
It was only a very small piece of pizza anyway

At least don't give him pizza dipped in vodka.

my pizza is always dipped in vodka

You didn't sound drunk at all, only a bit frustrated. Those key cards are a pain, even at the best of times.

I need four keys to get in my front door. Imagine trying to do that while drunk, holding your pepper spray and trying not to slip on the porch! No fun.

I can barely manage it when I'm sober!