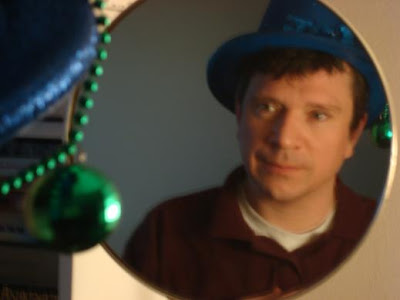 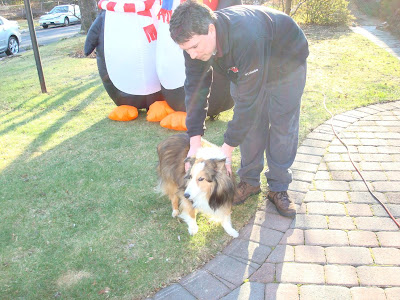 Bernice was doing well this day when I stopped by Quill's parents' house in Silver Spring, Md., Jan. 3rd, 2009, Saturday. Click on image for much larger version.

I love you, Bernice. You're a good dog, and always will be. 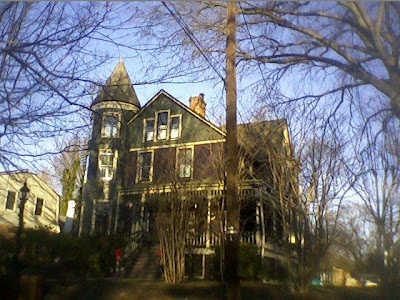 One of the large Victorian houses along Howard Ave., in old Kensington, Maryland, Jan. 3, 2009.

Tomorrow I am to see my mom and spend the night in Millersville, Md., and then on Wednesday, I am supposed to fly to Florida to visit my dad for a week (Jan. 7 - 14, 2009). Updated: This did not happen because my mom was ill today. The cat adoption didn't work out for her. 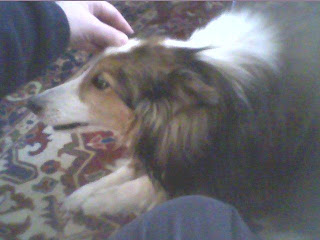 Bernice on the carpet in her Silver Spring, Md., suburban sanctuary.

Tonight, I also saw hot, straight Damon and both Fanny and Eric, visiting in town for the first time since Aug. 2007.

I should be able to see those three on Monday and Tuesday (I leave on Wednesday and then Fanny and Eric depart ultimately to Mexico and Minnesota, respectively) before I depart for Florida. AND Kristof is returning tomorrow. 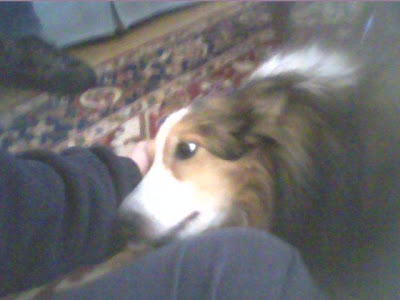 Another picture of Bernice and me.

I will try to update this blog before I leave for Florida (Jan. 7 - 14), but I may not have a chance to do so. Based on my readership, though, nobody would really notice. Boo.

P.S. I am concerned that a certain blogger friend of mine has decided that because of the kinds of entries I write that I am just not someone she wants to interact with any longer. 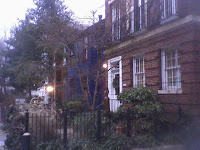 I was going to write a new entry, but I want to keep this entry up as my lead one for at least part of my upcoming trip to Florida.

Things were actually good today in a variety of ways, incl. in how it seems my part-time job plan this upcoming semester is going to work out. I think. But I am so depressed. 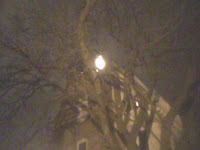 Every time I resolve to put the memory of certain people (yes, Mr. Sirius) in my past, this emptiness takes over and I just can't let go. I can't willingly jump into a vacuum, a void, as it were. I suppose it's all just a mental imbalance on my part. Nothing else.
Posted by Regulus at 3:18 AM

Have a nice holiday.
Hope Bernice hangs in there a bit longer.


I do hope you aren't referring to me???
I'm on holidays too. I'm trying to stay away from my laptop as much as possible...

I just thought my rants -- esp. previous entry -- were just too much and you came to the conclusion that I was a few too many sandwiches short at the picnic of life and therefore you might not want to be blog interact anymore. However, it turns out you just were away on holiday ... But in true gay man style, I made it ALLLLLLLL about me.

Bernice was in very high spirits on Saturday. She has her good and bad days. Xmas and New Year's Eve were bad. Saturday was a good one.

I WAS hoping, though, for your view of the top picture. I was hoping you'd see it as some sort of Edward Hopperesque sheeeeeeeeeeer genius on my part.

Nice picture! The first one of course. Acually, they are all nice pictures, but I esp. do like the top one.

Thanks for talking to me last night. I was very drunk so I don't remember a lot of the conversation, but I did remember to change that link. :)

I'm still incredulous that that comment WAS actually directed at me...!


Just be warned that:
I am on holidays.
I am avoiding my laptop.
I have not been commenting much because I am in summer holiday mode and am entrenched in my summer painting fest.
I have a lot going on in my life to deal with anyway and am enjoying my one week of painterly solitude.
Sometimes I do not have anything to say.


I am glad Bernice is well.

Kristof: "...I'd like to say that the top picture shows something intangible that I can only describe as some sort of Edward Hopperesque sheeeeeeeeeeer genius on your part"

To quote Mrs. Slocombe, "you flatter me a little too much, but you're a bright girl."

See you tonight at our group dinner at Bua. I actually hope we don't have more than six people, you're willy-nilly inviting of people last night at Cobalt notwithstanding.

Rita: I hope my comment over on your CCC blog was appropriate. I really think those council folks know they robbed you of that seat and are clutching to the city charter in a legalistic way for cover. As we talked about last night, I think you're in a better position than would've been the case had you gotten on the council for the next two years because I think it would have been a very frustrating experience. That's not to say you can't try again.

I do think their behavior was pretty dreadful and ethically dubious. I can so relate to what you went through: thinking you have something that you *earned* (not something handed to you) only to have it snatched away.

I saw you should be a political activist and gadfly and make their lives miserable the next two years. Use the newspaper and your online blogs to good effect to get under their thin skins.

Fifi: Again, my apologies. I'm going on holiday, too, so I won't be around anyone's blog for the next week.

Perfectly kissable you are. Festive and very cute. *steals picture just because*

Hmmm. I should make a "Regulus" shirt. It would make me happy... but I won't, because it would totally freak you out.

I want that pink sidewalk hat... Wait, no I dont, I have no idea who wore it. Ick. Cooties.