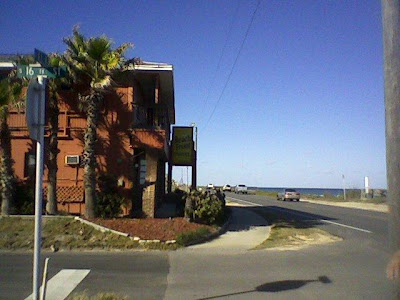 I'm here on the 2nd full day of my visit to see my dad at his little apt near the beach. (No, the above place is not where he lives. He has an actual apt.). I have actually shortened the trip by one day to Tuesday, Jan. 13th. No, nothing bad happened. It's just rather ... stultifyingly boring ... here and I want to get back to do some stuff, work and school related.

My dad has no computers or internet access, so I'm in a little video rental shop off Moody Blvd. by the ocean. I have exactly 15 minutes to use this computer and the woman owner is sitting near me.

The flight here was very bumpy on Wednesday and my connecting flight in Charlotte, N.C., to Daytona Beach, Fla., was CANCELLED along with a bunch of other outgoing flights at that time due to turbulent weather, but there was another flight 4 hours later. That was actually a good thing -- otherwise I would have been stranded overnight in Charlotte until 1030AM the next day. That is, I would have been stranded in the airport since the airlines (in this case, USAirways) don't dare pay to put you up in a hotel if it's "weather" related -- a term used like "Act of God."

The DCA - CLT flight was continuously moderately bumpy. The CLT to DAB flight was less bumpy, except for one fierce bump somewhere off Jacksonville at 36,000 feet. The aircraft was flying perpendicular to a screaming 120kt+ jet (stream) of wind at that altitude. WHAM! It was a sideways blast rather than the usual up-and-down "pockets" and enough to make me -- for the first time ever in the scores of times I've flown on a jet -- genuinely momentarily frightened.

The night flight from Charlotte to Daytona Beach on a jet only 2/3 filled was stunning -- looking at the constellations of human civilization lights below and the constellations of stars above. The star Sirius, its constellation Canis Majoris and Orion were my companions above, riding high above the blackness toward the unseen Atlantic Ocean below from my east-facing seat.

I'll refrain from waxing melancholy about Mr. Sirius, who has totally forgotten about me, and instead say I think I'll start my second blog up again -- the one "to" him -- when I get back. That way, it'll clear up excessive mentions of him here. As for stars, the nighttime sky on this "remote" part of the Florida Atlantic seashore is very starry indeed. 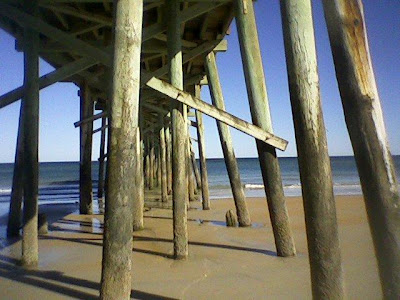 Anyway, the weather is very sunny and mild, albeit dry and windy here, highs around 65F to 70F. Tomorrow, I am going to attempt an all-day (approx. 7 hour) 15-mile walk from Daytona Beach back to Flagler Beach along the beach. My dad is going to drive me to Daytona Beach in the morning and I'll try to walk back. I did something similar walking from Myrtle Beach to North Myrtle Beach, South Carolina in the summer of 2004 when he lived there.

That's all for now. My next entry very likely won't be until Tuesday night or Wednesday when I get back, hopefully safe and sound.

What a beautiful picture of the old weathered pier.
the long walk sounds lovely, it looks like such perfect weather to do that.

It's really good to get away from normal everyday routine,it's good to be bored.

I dare you to jump into the water. Go on.
It would be very cleansing.

remember, the pain is momentary...it's all in the mind...
lol!

I love the pier picture... and like Fifi said, sometimes it's good to be bored. I wish I was there just for an hour or two at least... it's a bit chilly here

I might even attempt that colossal walk with you. I used do that sort of thing "back in the day"

We could make it a game, a scavenger hunt/race/I don't know... as long as we didn't find/land in that Jumangi game I think we'd manage.

I hope you enjoy yourself... and don't get too introspective. I have a feeling that's not a good thing for you (it's not for myself).

Just saw this, you've been wanting change in your life. You'd be near Fifi, sort of. Click Me