From the Washington, DC Autumnal Vapid to the Deep Space Cosmic Sublime 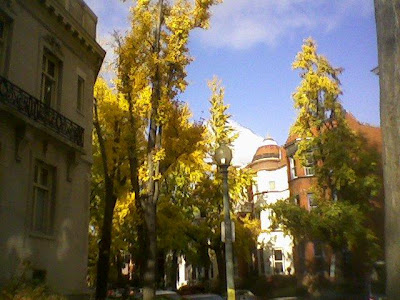 It's fall in Washington, D.C., albeit the usual way above normal temperature and dry sort I hate (see below). Here the leaves of the ginkgo trees that fill the city's side streets are in autumnal yellow peak. 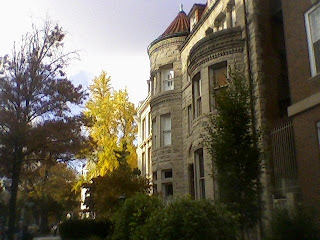 The ginkgo trees are pretty to look at but they are dioecious, having distinct male and female varieties, and the female produce this fruit-like structures that are actually sarcotesta surrounding the ovules and are filled with a butyric (or butanoic) acid.

When squashed open, as invariably happens on the sidewalk and streets, it smells like, well, shit (rancid butter is the usual analogy). It's a disgusting smell and I hate these trees. I know shouldn't hate a tree -- that's inherently wrong -- but when you smell that for weeks it really wears on you.

The predominate elms and oaks are also at leafy colorful peak. And they don't produce shit smells.

Needless to say, I am in a bad mood this Saturday afternoon. I think at long last I've just run out of things to say and maybe I just won't update this blog anymore. This is entry no. 98 of this new blog.

I updated my Arcturus blog yesterday (entry no. 436 though I deleted a handful of entries back in 2006) with a bit more election commentary and a Michael Lind column. Please read it if you get a chance. 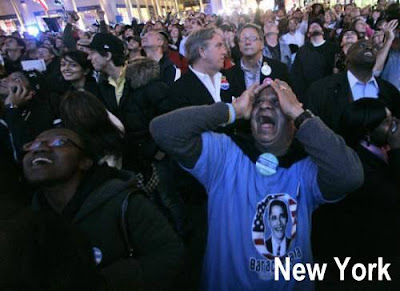 I will repeat one comment here, though, concerning the narrow passage of the vile Proposition 8 in California: How bitterly ironic that the big increase in African American votes for Obama in California helped secure the passage of this initiative funded by the frickin' Mormon Church, which until 1978 (yes, 1978) viewed blacks as somehow a race cursed by God and could not be priests. Here is an interesting account of that history. 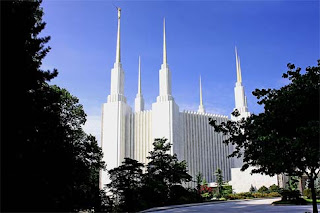 The Washington Mormon Temple in Kensington, Md., just outside of D.C. For years a railroad overpass over the Outer Loop of the Capital Beltway with a nice view of this Wizard of Oz-like structure had spray painted "SURRENDER DOROTHY" on it. It was a landmark in its way -- but later it was painted over. Boo.

As for Prop 8's passage, the black-Mormon "alliance" was an unholy one indeed given that history.

However, there is some grounds for optimism on challenging this initiative, as explained here and suits have already been filed. You don't provide people basic human and civil rights -- and then rescind those rights -- based on shitty plebiscite. That's not how it works.

The weather today is again 67F and sunshine following a shitty weak frontal passage that produced no rain. 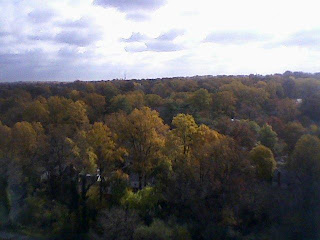 The fall view from where I work in Bethesda, Md., looking south across Chevy Chase, Md., into D.C., Nov. 7, 2008. The Mr. Sirius Things Remembered Tower is visible in the distance in this blurry cellphone image.

More to the point, the weather is pure D.C. nothing shit indefinitely. It's at times like these when we are in a three month long "no weather" spell that I really can't stand it here and an asteroid can hit for all I care.

The only thing we are guaranteed is way above normal temps "UFN" (until further notice) and no precipitation. 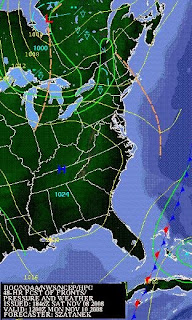 Here is the loathsome 48 hour forecast valid for 7AM Monday, 10 Nov. 2008, right about when I'll be getting up in agony to go to that job I can't stand.

I've said it before and I'll say it again: We effectively do not get "winter" any more in the southern mid-Atlantic (or northern "South Atlantic," using Census Bureau Division for the Washington / Baltimore area).

We're now firmly locked into a 65F to 70F high and 42F to 48F low in November and partly cloudy -- a few pissy little mid to high level clouds. At the depths of winter, it's 45F high / 28F low and sunny in late January, and even that doesn't last too long. Spring is back by late February, dreadful summer by May and it runs until late September.

As for my job, I have made my formal request to go back to four days a week hourly. The reasons are that I need that flexibility. I cannot sit there for 40 hours a week -- which actually means 45 hours a week since you're really tethered to the place at lunch, and in fact often rises to 47 to 48 hours a week. 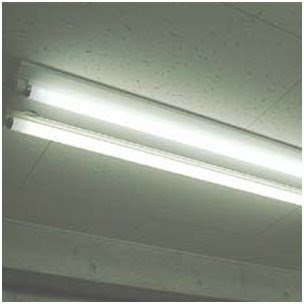 The fluorescent lights are too bright, I get headaches, I can't sit still for that long, and it has "analyst" for five months, I have saved NO money (I earn $41,000 a year, or a net of $1201.89 every two weeks.) The only reason I have ANY money is because of my student loan refund -- the return to school for an extra year (two semesters) ending in May 2009. I need more flexibility and there is no benefit, other than the health insurance, which I never use anyway, and if I did, the cost would be exorbitant no matter what. I want to return to four day a week status by early December.

If the answer to my request is no, then I'd probably quit in January just as my second student loan refund arrived. I'd be OK through May/June even if I found no other work, and by that point, I might just move back with my dad, esp. if he has moved to Key West by that point. Now if the answer is yes, I can easily remain at this job through late 2009 in a sustainable way, only slowly drawing down the nearly in tact student loan refund. Of course, I will be looking for other work -- preferably a government job. 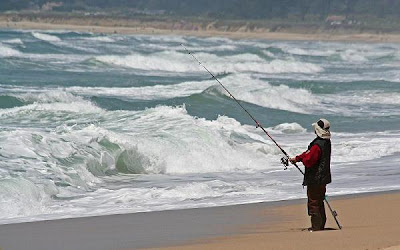 Here is where I really want to be. I picture this as my Australian blogger friend Rackorf in far southwestern remote - rugged Australia. (Rackorf's link to my blog refers to me as the Star Wars character "C-3PO" -- hmmm.) 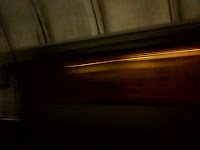 So the Apparition is once again apparently gone for good. Fine. I not only do not care, I'm actually glad.

Who needs a once - every - two - weeks fly by "visit" anyway like some ghost train flying through a station at night. That's supposed to be some big thrill for me, I guess.

On an unrelated note, what do the following two pictures show? 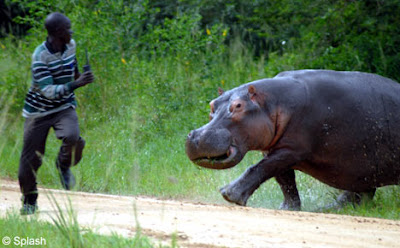 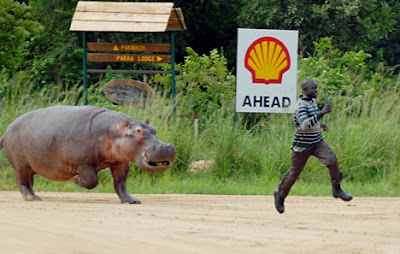 A. Regulus and Flippo playing hide-and-go-seek;
B. An irritable Mr. Sirius chasing an unwelcome customer out of his bar at the center of the Observable Universe*;
C. A gamekeeper in Murchison Falls National Park, Uganda, getting too close to an aggressive, territorial hippo (is there any other kind?) in June 2007 and fleeing for his life. 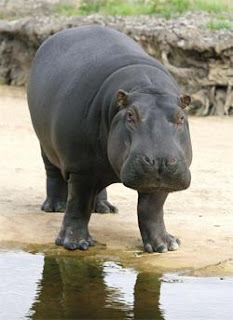 Fortunately, the young man managed to keep ahead of the creature until it tired out and stopped chasing him. This is not an easy feat since they can briefly sprint up to 30 MPH, faster by 4 MPH than even the fastest human sprinter -- and probably twice as fast as a typical person, probably four times faster than what I could move -- and so clearly this hippo wasn't going that fast. Still, though.

Speaking of the Observable Universe, NASA scientists at the Goddard Space Flight Center in Greenbelt, Md. (where I used to work) have discovered evidence that very distant galaxy clusters (up to 6 billion light years or nearly half the age of the Universe away) are moving upwards of 2 million miles per hour toward a single spot or small region. 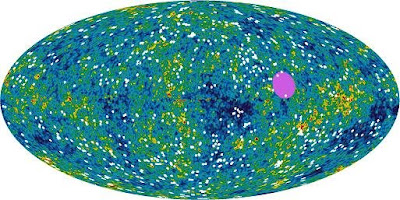 This small region is denoted by the purple spot placed on this famous WMAP image of the cosmic microwave background radiation left over from the Big Bang itself. This WMAP images also includes white spots denoting the distant X-ray-emitting galaxy clusters. The region denoted by the purple spot is almost certainly OUTSIDE the visible / Observable Universe. The spot is located in the direction of Vela and Centaurus.

This has been termed dark flow and it manifests itself in what is called the kinematic Sunyaev-Zel'dovich (SZ) effect, a sort of minute "Doppler effect" in the wavelength of the cosmic microwave background radiation (denoted CMB radiation or just CMBR) as a result of the CMBR's interaction with the X-ray photons and electrons from the distant clusters. 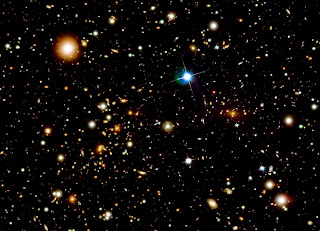 Those X-rays, such as from the 3.8 billion light year distant "Bullet Cluster" seen in this deep field image, are exhibiting a preferential motion that, in turn, is due to the clusters' motion toward that spot. (There is a related stronger thermal SZ effect that affects the temperature of the CMB radiation that has been known since the 1980s.)

Maybe it's from something not just outside the Observable Universe but our Total Universe -- coming from OUTSIDE of it, like GOD (or the equivalent of a Chinese or Indian astrophysics graduate student in a physics lab in some other Universe) pulling along a certain thread of it.

And on that note, I think it's a good time to end this entry.

Your picture will be me next week. Fucken yeehar.

No! The horror! We're all doomed, run for your lives!

I'm sure this is Barack Obama's fault...

Rackorf: Looking forward to seeing some pictures when you post them (in about 4 to 6 months).

Dirkstar: I'm glad you are keeping a sense of perspective, proportion, and balance and not becoming unhinged or obsessive on things. I never obsess on things. Or people.

If I may make the polite observation, dear Reg,
I don't think you would like it in WA.


The blokes are truly scary. All of them. Not in a good way.

hahahaha - get back in ya box fifi.