Under the October Sky, Day and Night 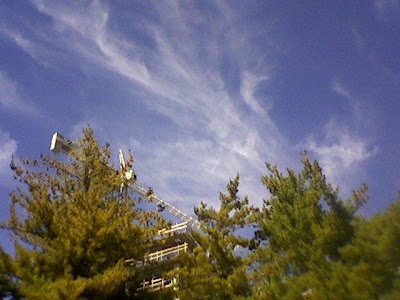 This started out a VERY difficult day as I woke up from a roiled, agitated sleep around 545AM and I could not fall asleep. By 630AM, I was in a frenzy with racing pulse, fever, and in real distress, and ready to quit my job, or at least go in late and try to get some sleep even as I planned to explain to my boss why I am going to go back to four days a week or 30 hours a week. 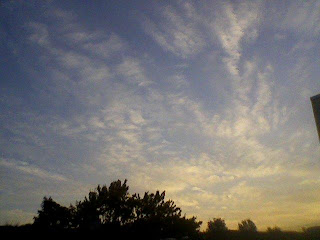 I chose the latter, sleeping until 1045AM and feeling better because of it, except I didn't explain anything to my boss -- that simply did not come about. I got in at noon and was rather busy writing up -- it's always intensely busy there to no meaningful purpose and the 45 hours a week is simply too much, but these are things I want to write about at some other time -- three 3-page stories for a bi-weekly global warming (climate change) monitor we put together for clients who do not read it. 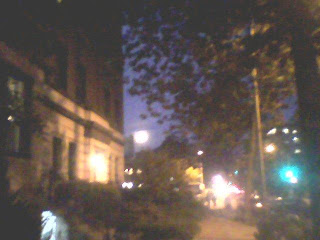 My moonrise picture as seen from 17th and P St., NW, here in D.C. yesterday (Oct. 14) evening did not come out well. I was on my way to Bua to meet Gary and Kristof.

I recently finished 42 pages on the history of the evolution of NRC regulations and the nuclear power industry. This gets to the heart of the problem with the job: I am not a specialist but rather a total generalist, and I have no connections and ability to "get inside the agency."

I am really hoping to apply for the professional development program at the Federal agency where I interned in 2006. I may do that next month if the opportunity indeed arrives.

Anyway, about my work situation and this morning, long story short, no changes in my status were made. My goal is to wait until January when -- right around the time Obama is sworn is as president, unless tonight's debate really made a difference (I didn't watch it) -- and get my second student loan refund and have a significant pile of money as a cushion (approx. $11,000).

Then I'll ask and if it doesn't work, at least I'll have some money to live on until I get a new job OR move down to Florida, esp. if he moves from Flagler Beach to Key West, with my dad and finally leave D.C. 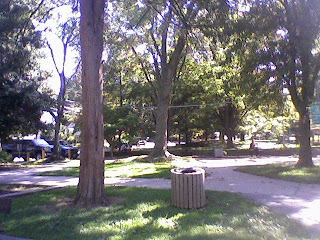 I've been suffering from a cold -- one went around the office -- made much worse by stress. I have a lingering cough and sore throat and headache. The other day and this morning I had a racing pulse and felt like I was dying, but it may very well be anxiety.

I took the J4 Mobile Ghetto "express" bus from Bethesda to College Park tonight for my Wed. night class in state and local government budgeting issues.

Let me just say that I really like my teacher ... she is very charismatic and knowledgeable and experienced and enjoyable and the class is fun (and I sit next to her and make comments on occasion that she and the class find funny, such as "governments are like those mattress stores you see always on the verge of bankruptcy and going out of business but never actually going away..."). 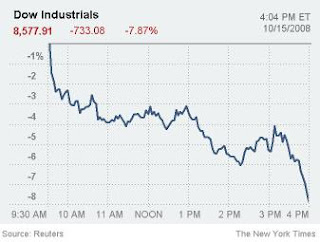 Sitting there for 2-1/2 hours every Wed. night during this time of fiscal and financial and now it looks increasingly like economic crisis is depressing EVEN FOR ME. We are in for some bad times, or so it seems.

My Monday evening class is a water resources management one. It is quite interesting, too. We are supposed to submit our comments to the U.S. Army Corps of Engineers on the proposed new Principles and Guidelines for water and related land resources implementation studies. The USACE site is here and the Federal Register notice is here.

I ended up in a 20+minute conversation with a chatty fellow at USACE. My professor in this class is a big figure in this field. 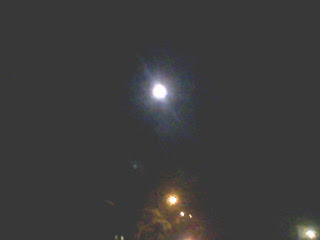 As for tonight, I went to Plato's Diner after class where I actually had a nice dinner and then I walked in the mild, serene moonlight of the October night (the above picture was actually taken in College Park on Monday night) to the College Park Metro and headed back into D.C.

We could some rain, it has been frickin' dry this month and we're back in full bore D.C. no-weather weather. 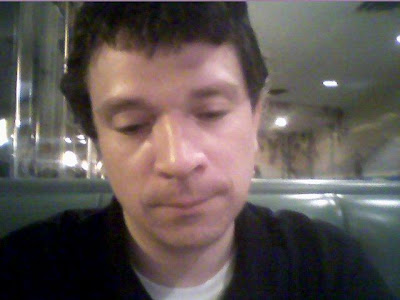 I was aiming with that picture above for a Edward Hopper-esque style, as in his 1927 painting "Automat": 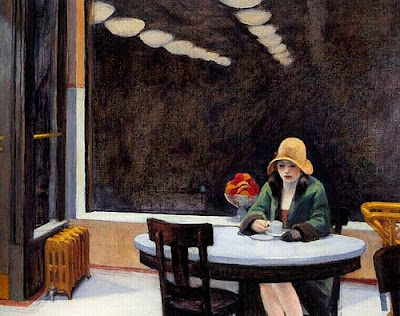 I guess it didn't quite work. Perhaps I needed to have on that 1920s style hat. I'm sure my grandmother had one in her day. She would have been 100 years old on Nov. 4, 2008, the day of the U.S. presidential election that Obama should still win ... ... unless bogus GOP and mediawhore narratives about the travails of Joe the Plumber under Pres. Obama get the American Red Flyover State proletariat whipped up into the usual self-defeating pro-Republican frenzy, which may very well happen. See how well Joe does under McCain.

"Hi, I'm Joe-sephine the unlicensed Plumber from Burnt Smokestack Heights, Ohio, and I don't have a damn clue what I'm talking about. It was just some shit I heard on Rush's radio show while in my pick up truck."

What an idiot country.

That's all for now. I need to go to bed. I'm still feeling under the weather. Oh, yes, I updated my Arcturus blog finally here.

why, you Do look sad in the last picture.
But at least we looked at the same moon, I was shivering at the hockey field, which is always chilly for some strange reason, after a long day at work.

It was about 8pm, and that moon crept out of the trees, making me feel very wistful and strange. I have rawn the moon ike that in a number of my artworks.

I hope you feel better soon.
The recession is very alarming, especially here at my place.

I've been feeling ill all this week, but as for the picture, I was actually trying to go for an Edward Hopper pose -- the one of that lady alone in his picture Automat, but it didn't quite work out.

Yes, we are looking at the very same Moon. I was thinking of that line from Enya's song Anywhere Is: "The Moon upon the ocean / Is swept around in motion/ But without ever knowing / The reason for its flowing ..."

For a moment I wasn't sure which picture is that of you and which one is of your mother:-)

Hey we can try redoing your Hopper style picture. But aside from the hat you need lots of empty space enclosing you. It's there in most of hist paintings, strangely, reminiscent of Giorgio de Chirico (I know, different time, different style, different everything but still). you can't do that alone. Someone has to take a picture of you and there has to be some distance between you and the camera.

I tend to get excited when talking about art

"For a moment I wasn't sure which picture is that of you and which one is of your mother:-)"

"Someone has to take a picture of you and there has to be some distance between you and the camera."

"I tend to get excited when talking about art"

You must live in an art museum then for as frequently "excited" as you are.

So are we meeting at 715PM-ish at Cobalt today? It's the leather bear daddy happy hour in an unlikely place. Gee, I wonder if [****] will be there.

I heard on channel 9 news last night that someone actually explained to Joe the Plumber the difference between business revenue and income and now he is no longer so sure that his taxes would go up under Obama's plan.

Joe the Plumber was a duped GOP plant. He is what Marx would call "a bribed tool of reactionary intrigue," and the whoremedia love stupidly simplistic "narratives."

My sense is -- and to his credit -- Mr. Joe Wurzelbacher sort of knows he's venturing into dangerous territory by being such a willing political lightning rod in such a supercharged election campaign environment, esp. given that he's not a licensed plumber and has had liens against his property.

On another note, I think I'll start calling you Mr. Sirius and you call me (for no particular reason) "Ani."

Damn stock market is up. And no rain, either. Boo. Bad Friday.

On another note, I think I'll start calling you Mr. Sirius and you call me (for no particular reason) "Ani."

I'm afraid that would fuck up my entire cognitive mapping