The Muppet Show (Part I) OR Another Washington Weekend

**This is a reposted and somewhat modified entry from last night** 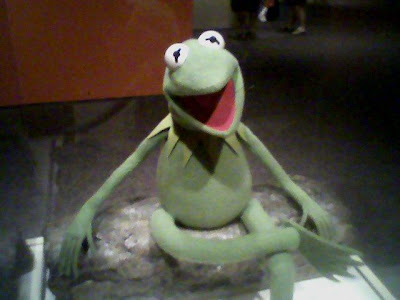 I'm not feeling all that well this morning AGAIN for the usual reasons. Anyway, the above picture was taken yesterday at an exhibit at the S. Dillon Ripley Museum, Smithsonian Institution here in Wash., D.C, dedicated to "The Muppets" by Jim Henson.

The following song has been stuck in my head all day ...


The video itself really gets me all verklempt: 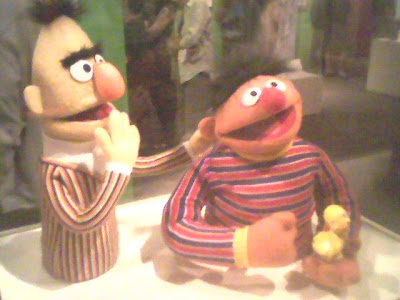 I have 25 or so pictures to post, which I will do later today or tomorrow. 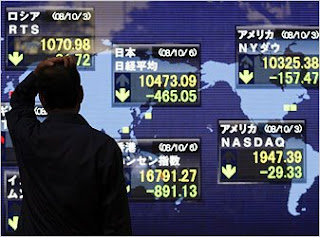 This isn't going to end until Bush is out of office.

Perhaps in one way this whole thing may be viewed as one last multi - trillion dollar money smash and grab by the Bush Cartel gangsters, not to mention the predictable end result of GOP corporate fascist values: total collapse into a swirling vortex -- if you will, a maelstrom -- of financial, economic, and even social anarchy. 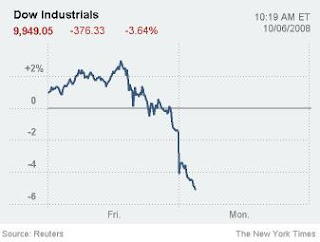 I think we need more deregulation. Perhaps the government should dissolve itself entirely and from now on we will pay taxes directly to the CEOs of major mortgage and credit providers.

Related quote from Marge Simpson:
[...]and it's own by a corporation so you know it's safe

There is just so many things about the financial crisis that are puzzling, besides my lack of knowledge about wall street economy.

I'm not shocked that it happened, I mean the consequence & the bailout & neither is anyone else. I find that rather puzzling, seeing that it did happen.

Unless, Government is actually owned by Corporate whosits/whatsits(to coin a phrase by you know who)

I know that's what you & krzysztof are implying & see, I find that puzzling that we can all realize that & still feel like sitting ducks.

That's why I feel it so important to try to make a change within my own sphere of influence. I'm determined not to be a sitting duck there, too.

One thing I have to say about Palin...She's given the rest of us dummies hope. :)

It has been argued before that rightwing corporatist Republicanism and the whole conservative movement in the United States is a sort of inverted Marxist movement. The fundamentalists serve as both the "bribed tools of reactionary intrigue" and the shock troops.

If there is anything to that analogy -- and I think there is -- then perhaps it comes as no surprise, in a true Marxist-style Hegelian dialectic that the whole frickin' edifice of Bush/Enron/Halliburton/Bear Stearns/Phil Gramm-style crony corporate capitalism and outright theft and plunder should end in mayhem.

On a more weighty matter -- like the size of my ass -- are we meeting at Bua's tonight? Bartender C. is working Co-30 for hhr, so we could stop there thereafter.

I'm not that keen on watching tonight's prezidentchewal debate since it is a bogus "town hall" format where "ordinary citizens" ask shockingly and painfully stupid questions that merely serves to point out why The Empire Is Falling.

(And it's PRECISELY this kind of arrogant attitude on the part of PEOPLE LIKE ME WHY WE LOSE ELECTIONS!)

Handmaiden: Thank you for that sweet email you sent me. I will reply tonight. It was very nice.

As for your comment/question here, to tell you the truth, sometimes I feel like it all really is just a Big Lie run by the BushCo Cartel and other times, I think there is a sort of barely-suppressed anarchy and chaos that threatens to take everything down.

What I have trouble believing -- because I am a totally lost soul -- is that there is any small town New England-style happy place.

I post-post-modern and post-post-everything, and adrift. The only metaphysical sureties in life are: 1. GOD has failed us. 2. We have failed us. 3. This too shall pass. 4. Life will go on. And on.

As for Ms. Palin, she's powerful evidence of the fundamental sitcom-like non-seriousness of our age.

Speaking of seriousness, I haven't mentioned Mr. Siriusness himself (I - GOD) lately, have I?

Speaking of sitcoms, TV Land is showing Third Rock from the Sun now. That show is hysterical.

Wel you have given me a new slant on that song, but I still don't especially like it. I sort of do.