In Need of (Many) Exorcisms 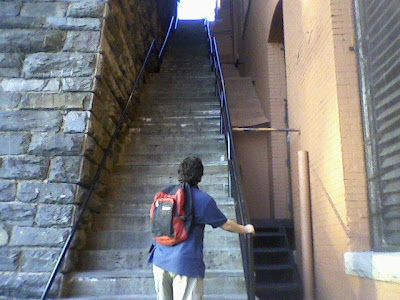 This is just a quick update ... I'm planning an update tomorrow night with the remainder of those images from this weekend and a few from today. This entry will be short on pictures. Or not. 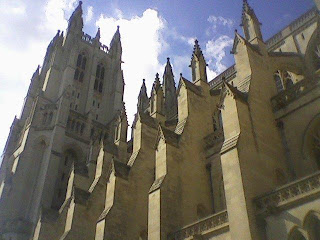 I'm feeling under the weather with a bit of a fevered headache and worn out. I'm behind on a project at work. Wednesdays are my busiest days in that I work all day and then I go to campus (on the J4 bus from Bethesda to College Park) for my 730PM class.

I wanted to post an update about the financial crisis and plummeting world stock markets -- including the interesting tidbit that at least for yesterday, the Dow Jones Industrial Average was actually HIGHER than the Japanese stock market's Nikkei 225 index, which I don't believe has ever happened before, at least not since 1970. 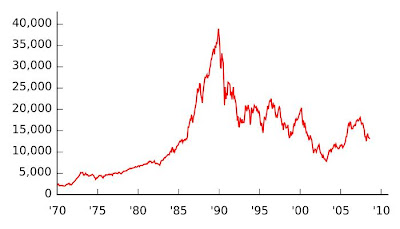 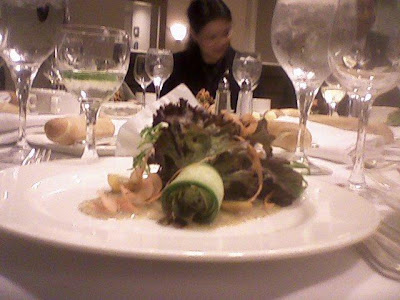 Speaking of Japan, I actually went to a Japan Commerce Association of Washington luncheon earlier today here in D.C. at the Fairmont with a colleague to hear a former Energy Information Administration director speak. I felt so out of my element. My colleague -- who was dressed smartly while I looked uneasy in a shirt and tie -- spoke fluent Japanese. This was helpful for the pre-luncheon reception, while I sat in a corner out of sight. 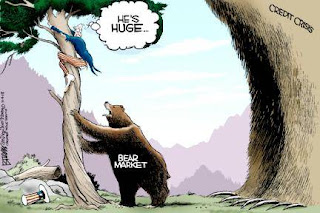 The FAR bigger issue right now, though, of course, is the total freeze up of the credit markets and the need for the Federal Reserve and Treasury Dept. to essentially nationalize the entire banking system for a period of time. Paul Krugman has written about this extensively.

I actually am glad Ben Bernanke is the Federal Reserve Chair. He is an academic student of the Great Depression and I think he gets it and what needs to be done.

As for Krugman, I love what he said the other night on Olbermann about why we aren't seeing people lining up to pull their checking and savings account money out of the banks (as is happening in Iceland right now, where the situation is very bad). 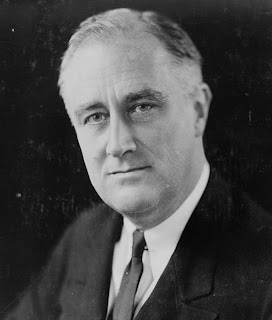 Krugman said, "In some ways, the ghost of Franklin Roosevelt still protects us." By this he was referring to the banking reforms of the early New Deal that FDR instituted.

This mess won't really end until at least the election, which can't come fast enough.

That brings up the other thing I wanted to talk about: the catastrope-in-the-making that is McCain-Palin if they were to win. Now I guess at this point I am thinking Obama is going to win, although it will be closer than it should.

I think Obama will win because of the ongoing scary financial crisis that voters (properly) blame on Bush/GOP values, policies, etc. This should propel Obama - Biden to a win, along with Democrats in general.

Also, it is also useful that there is a media / internet infrastructure that allows "the Left" to set the narrative, and with the help of the mainstream media who turned on McCain in the past month. It was very different back in 2000 for Gore and even in 2004 for Kerry. 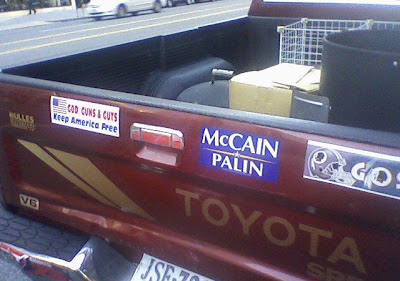 I saw this pickup truck parked along Connecticut Ave., NW, near Dupont Circle here in D.C. last Sunday (Oct. 5). The "God, Guns, & Guts" comes from the perennial GOP platform of "God, Guns, & Gays" -- except, dare we hope, it might not actually work this weekend.

McCain is starting to morph into a half-deranged Popeye sort of figure, except Popeye looking like he's age 85. Did you hear his "my fellow prisoners" slip up today in Pennsylvania? His health care "reform" proposal would be an utter social catastrophe. 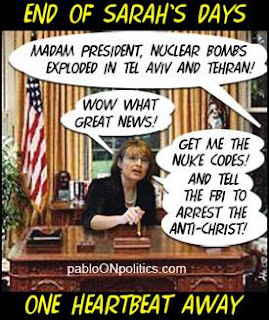 And as for Palin, she's (of course) a whack-job fundie who is as power hungry to be president herself as she is clueless.

This is a woman who hated me when I was 5 years old in Eatontown, N.J. in 1975, where we lived before she and her then-new second husband -- that would be Ray, my stepdad, to whom she is still married -- went to Belgium. I was hiding under a tree and my dad showed up and she said to him (referring to me) in a contemptuous way, "Look at him standing there." I think I was staying away from some other children.

Dreadful. Of course, when people meet her, they don't see that part, just a sweet sounding, earnest lady. Long story short, this is nothing new and basically I do not have a mother who gives a shit about me. She never has. I could drop dead and it really wouldn't be that meaningful to her. I see her about two or three times a year and she lives less than 25 miles from me (after two years of no contact), and it's always just for lunch in College Park at the 94th Aerosquadron. As for my dad, for all his problems, this was never the case. 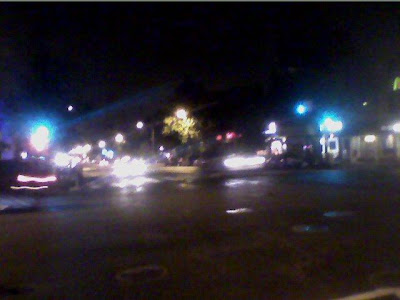 Well, I did stay at her house one night this past January before I went to Florida because she lives so close to BWI Airport, from which I was flying out of the next day.

Anyway, the current "estrangement" began because of some bile she started spewing at me precisely about Sarah Palin when the good governor was selected. This was right when McCain picked Palin last month, whom he vetted for about three minutes.

I said I wondered how Palin could run for Vice President while the mother of five (not to mention soon to be a grandmother courtesy her unmarried 17 year old daughter), incl. a special needs baby. 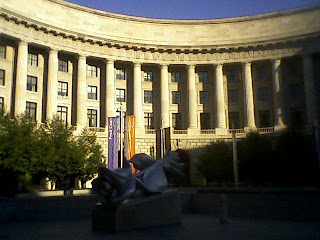 She said the following with growing hatred in her voice, "If there was ONE THING I hated when YOU were a baby is when I would go to a job interview and some pasty faced white guy would SIT THERE and say to me --"

"--you're really talking about me, aren't you?--"I said over her as she kept repeating the last line. 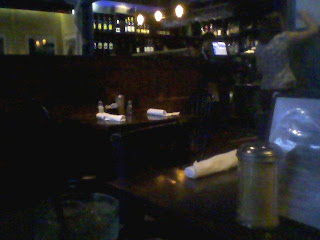 I texted and phoned her this week but no reply.

The irony is that her martyrdom complex about how hard it was for her when I was a baby and how -- essentially -- I contributed to her unhappy life is so deeply and bitterly ironic.

OK, that's enuf of that. I hadn't intended to write about this but it was bothering me. Well, that's all for now. I desperately need to sleep. 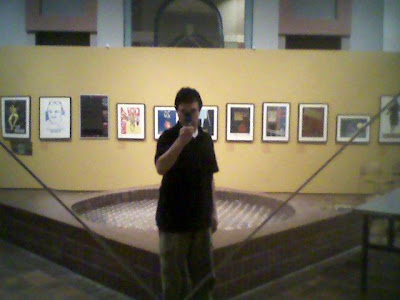 Yours Truly, Regulus, by a little fountain in the subterranean S. Dillon Ripley Center of the Smithsonian Institution here in D.C. last Sunday after I went to "The Muppets" exhibit.

The photo of the 'Exorcist' steps is absolutely amazing. One of the best I've seen. I wonder who took it. You have some very talented friends!

I wonder who took it.

A. Yo mama
B. My mama
C. Yo baby mama baby
D. Mr. Sirius while impersonating Linda Blair

Correct answer: C. That would be you. There. Credit has been given where credit was due, thus solving any creditworthiness crisis in our foe-friendship.

you forgot 'mee mama'. For those of your readers who don't know, 'Mee mama' is a delicious lo main dish served at LL where we often go for a drink or two.
I think I'll have it next time we go there

I'd hardly call it deelicious. Sort of tasty when I'm drunk, which is never.

As for "my readers," please. I have about three readers. I had dozens of readers until Flippo got into a weird online argument -- or rather just insulted gratuitously -- someone named "Yuppie Paris" and then, voila, I was delinked and now my readership has fallen more steeply than the Dow Jones Industrial Average (off ANOTHER 678 points today and over 2000 points in the past week or so -- yikes) or my bank account.

But at least we're both still young and beautiful.

(I'll explain when I see you.)

Honestly, though, the stock and credit market thing is scary.