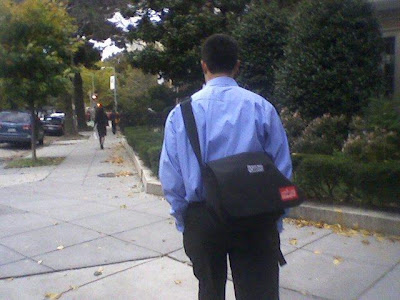 This fellow was walking just in front of me as I headed to the Dupont Metro along New Hampshire Ave., NW, this morning. He was really attractive in that beautiful (probably straight) guy way I so like but that the Universe (orientation issues aside) would sooner end than he'd be interested in me.

I just finished my water resources management take home midterm. But I still have a big memo to write for my state and local government budgeting class. And I have bunch of urgent assignments at work, but I (more than) half want to quit that job. I don't know how I'm going to get the rest of this stuff done this week.

We had an unusual weather day here in D.C. (by our boring standards) with a storm system forming essentially overhead and bringing us about 0.2" of rain -- all totally unforecasted this morning. And with temps. in the low 40s Fahrenheit, it felt distinctly winter like. The forecast was what is known in weather-speak as a big, huge bust -- but of the sort I like. 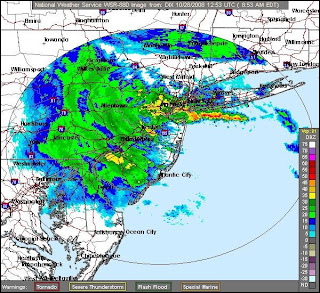 This storm really blew up overnight into a real nor'easter, except its track was a bit unusual -- due north right over New York City and northern New Jersey. The loop of this is quite impressive since it is pinwheeling right over NYC. Bands of lingering precip. are spiraling southward across central PA toward the Baltimore area. DC is probably just beyond any additional precip. 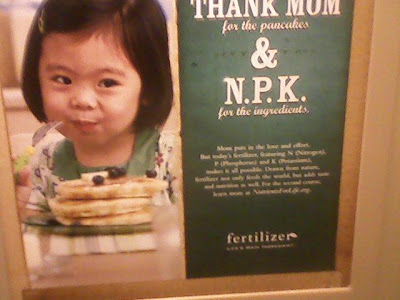 NPK fertilizers, without which the human food supply from its current agricultural acreage would not be able to support even half this planet's six billion people.

I was on the Staten Island ferry during that stormy weather on Saturday. Spectacular view of the southern tip of Manhattan and the Statue of Liberty. Kind of menacing with the fast moving clouds and waves.

You know who else is on the Staten Island fairy, I mean, ferry?

Oooh, I'm having a crappy day. My boss isn't here today but she's mad at me 'cuz I sent her an email saying I'm clueless, well, actually I said I was "lost" and she responded that that wasn't "professional" and I went to the boss above her again.

There is going to be a definite meeting tomorrow.

Anyway, that aside, see you at Jaleo at 8PM near Chinatown Metro. ANYTHING to avoid the high heel race in the silly gayborhood.

I know, I know,
No cheap wine and no high heel race for me this time:-(

Well, who the hell wants to go there and watch that, or rather, stand in a mob and not see anything, all while I take a round-the-block detour to avoid you-know-where. What a moral and spiritual black hole it is, although I know that you and Gary enjoy going into the self-absorbed Singularity itself and giving it your tip money.

Far be it from me to stop you.

you will see me tonight, baby doll:-)

It was awful here today. It sort of skirted around us here but one of my co-workers who lives in northern NJ claims there was 6 inches of snow in her driveway and she had no power.

Somebody who left early for a dental appointment called in to say "Drive caerful" because there was 4 inches in Boredntown.

I do not doubt them. I saw the crazy wind and snow here, unfortnately I was out in it for a bit.

I looked at the radar maps. I could see how there could be 6 inches then suddenly nothing. Crazy shit.

What's your weekend forecast for me friday and saturday?. If you get it wrong, 'tis ok. You can't do any worse than anyone else.

Speaking of the weather...So far we are having a beautiful fall. No frost yet & just enough rain to water the gardens.

I noticed that that picture on my blog disappeared the other day. I was wondering if i was the only one that couldn't see it as no else mentioned it.
Maybe they are just tired of my & my politik'n. :)

It sounds like you are real busy these days.

I just disagree with you vigorously that the weather was "just awful" -- and I also highly doubt there was four inches of snow in Bordentown, N.J. near Trenton. Accumulating snow fell above 2000 feet elevation in parts of Pennsylvania and New York. The highest spots in New Jersey -- including 1800 foot High Point -- may have also gotten snow.

It was a wonderful event that suddenly and rapidly developing coastal low that spiraled into NYC and brought a good 1" of rain across New Jersey. Well to the southwest, we here in D.C. even managed to get a bit, and that's saying a lot because we always miss everything.

That was a good event and I liked it, and all the silly hysterical wailing about how "bad" the weather was for the children only made me like it that much more.

The weekend weather is forecasted by the NWS to be partly to mostly sunny, seasonably chilly, and tranquil in central New Jersey, highs in the mid 50s, lows in the upper 30s Fahrenheit.

The political weather is forecasted by me to have a 40 percent chance of turning shitty with Dumb, Clueless, Religio-nutty, Bovine America reemerging to "proudly" vote for the party that will end the Empire and impoverish them further ... the GOP and McCain that is.

Sorry, I'm in a bad mood this morning. I know that's hard to believe.

Haidmaiden -- As I recall, don't the big storms start crashing into the Pacific Northwest around this time of year? I thought it was actually a bit earlier as in early October. I'm assuming it has been a dry fall so far. I'm sure that will change -- in fact, the NWS has your forecast turning rainy by Thursday and remaining so into the weekend. Lucky you. No, really. I like rain.

Apology for your bad mood accepted. Please don't get pissy with me. I'm just telling you what I was told! It really was some crazy weather here, honest. I was in some of it.

You're always complaining about the accuracy of the "official" forecasts. Weather is... well, somewhat unpredictable, you know that...

On the way home tonight there were 1/2 inch hailstones in a very localized area... about a block. It was really quick too! It was there then it was gone. One of those things you'd have to see to believe.

NWS is a government agency after all, no? You expect effiency? You know that's not gonna happen. I don't panic and freak out about the weather (I hate that people do)... they can't predict things from day to day, how are they going to confirm a sudden 15 second burst of rather large hail?

How do you map that? Or even prove it happened when you're too freaked out to even think to take a picture? Maybe the government was hoping to destroy Trenton, seeded the clouds and missed.

I was in it Regulus. It happened. I would have gladly let you have some of the odd precip. We've had over the past days. Many of us would I'm sure.

If you say it, BryanEveryThingTOInfinityAndEternityAndBackAndMore, then I believe it and that settles it.

I don't think the gub'mint has to destroy Trenton through secret weather modification schemes. Trenton has pretty much destroyed itself.

And I promise to try to have a conversation with you sometime this weekend after drinking a lot. Those conversations for some reason always make sense at that time, and you become my philosopher-king. Word.

HEY DIRKSTAR! How YOU doin', dude?

Sometimes, for no particular reason, I feel this strange urge to comment on your blog. I have no idea where it comes from.

I feel DISEMPOWERED when you fail to comment on my blog, and those negative-a-tory vibes flood the blogo-multi-verse and start redounding and ricocheting all over the place.

I also feel this way whenever I see Mr. Sirius (I,GOD) in his football jersey Halloween costume or read another "loving me, loathing everybody else this week" entry.

Mr. Grainger: "Mrs. Grainger failed to ROUSE me this morning!"

Mr. Grainger: My pipes are frozen
Mr. Humphries: Don't worry, a hot cup of tea will get them running in no time

Mr. Grainger [referring to, I believe, how he dries his sweaters]: "I leave them in the bathroom by the window and let the wind dry them."

Mr. Lucas: "It must be magic in your house."

So I'll see you at Slo-balt tonight for hhr.

Yes, I will see you tonight. We will discuss Chupacabra the goat sucker, gravity waves in the upper stratosphere, Kantian infinite negation, and, time permitting, other topics

(I need to run home first briefly, though, for a less than sophisticated but rather fundamental reason.)

I'll do my imitation of that little guy Leslie Jordan who plays Beverley Leslie on Will & Grace: "This is a gaaay baahr?! Whuuai, Aih hayve haaaayef a mind to leave. As soon as a finish my lemuhn drop shawt."

"This is mah business associate, BENJI!"

Hey there! Yes, we are having a beautiful, bounteous(?) Fall here in Oregon.

As we have so many evergreen trees in the northwest, it is never like fall in Vermont or any place in the east, but... this year the Big leaf maples stand out like gold & orange bullion in the hills & along the hiways. It's lovely beyond words.

Sounds splendtabulous ... your descriptions are so vivid and lovely.

UhOh, you were right, the first storm of the season coming our way this weekend.

"The National Weather Service said two low-pressure systems, one about 400 miles offshore and another that will deepen as it comes ashore — will move across the West Coast between now and Monday. They will bring with them some big seas, wind and a lot of the wet stuff that makes Oregon’s coast so famous.

Up to 2 inches of rain could fall in the Coast Range this weekend, the service said."

Sounds good to me.

I just updated my blog with a new entry if you get a chance to look. And, yes, I realize I should visit your blog more often.