"Sailing By" OR The Shipping Forecast 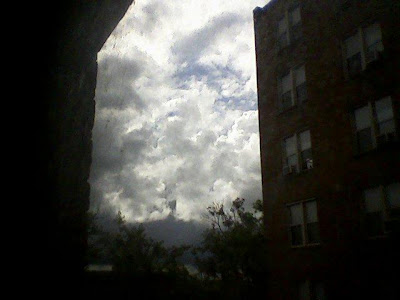 The view of a dramatic looking sky as seen from my apartment window here in Washington, D.C., Sept. 27, 2008. As you can see, I don't have much of a view from my wee efficiency in the Hampton Court.

A long time ago (1991 to be exact when I was 21 years old) when I lived in England (in Oxford to be exact) for an unhappy semester at this bizarre little offshoot school "affiliated" with Keble College (one of the 38 colleges that collectively make up Oxford University) -- these "affiliated" schools often had little to do with the university itself and were a way to get unsuspecting Americans to send their kids and their money "to Oxford."

Oxford-Schmoxford, as a TV news report on the subject once said. 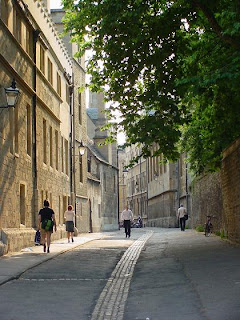 A back street image from Oxford that I got off the internet.

As for my own Oxford experience, I was deeply unhappy and depressed, but I was anyway and it had nothing to do with that. The experience itself was, upon reflection, okay. I LOVE England, except the food is awful, it is a very crowded place (with hidden quiet spots all over, though) and the air can be quite murky and even a bit polluted, esp. in winter time inversion situations.

Anyway, I lived with this lady Vanessa Kenyon in her pleasant house on a residential side street about two miles from chaotic, crowded downtown Oxford.

I had a little radio and at night I would listen to the BBC Radio 4 and -- in keeping with a certain British tradition -- listen to the shipping forecast on Radio 4 right after the midnight world news summary.

The shipping forecast itself was always preceded by a light little musical ditty called "Sailing By" that I just learned (thanks to the magic of the internet) that was composed by the late Ronald Binge. There is an informative Wikipedia write up on "Sailing By". 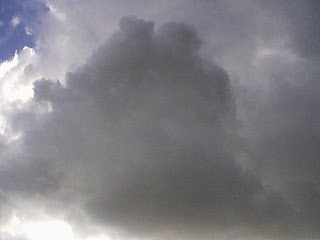 As an aside, Mr. Binge died on Sept. 6, 1979, which is note - worthy to me because (1) that was the day after I departed Belgium at age 9 to go back to New Jersey after having visited my mother that summer when she and Ray lived there, and (2) it was the day Hurricane David hit the mid-Atlantic, including New Jersey; Sept. 6, 1979 thus marked an ending date for the whole "Belgium time" of my 1970s childhood. 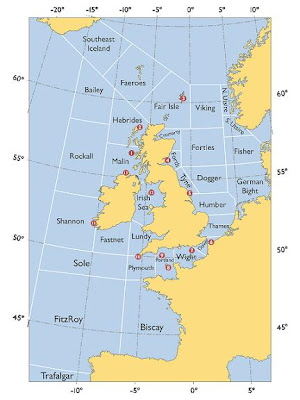 The shipping districts off the waters of western and northern Europe have odd names and it wasn't til years later that I was able to get a map showing them. As I never saw it written down, I thought the one was called "Fahsnet," but later I learned it was "Fastnet."

Every night in the late winter and early spring (Feb, Mar, Apr) it was always the same:

It took me FOREVER to see the spelling was "Utsire." Here is the link to a big version of this map. You may need to click on the image for the largest version.

We don't have anything comparable in the United States off the East Coast of shipping districts like this. We do have "continental slope waters" -- including forecasts for them -- based on the "canyons" that cut across the continental slope.

The biggest is the Hudson Canyon, pictured here schematically, stretching from New York Bight / Bay. Others include the Norfolk Canyon, the Baltimore Canyon, the Hatteras Canyon, etc.

In some cases, such as the Hudson and Norfolk Canyons, these are the river "valleys" that are now deep under Atlantic Ocean waters and that mark the river beds that were cut into the continental shelf itself during the great ice ages when sea levels were 100m or more lower. 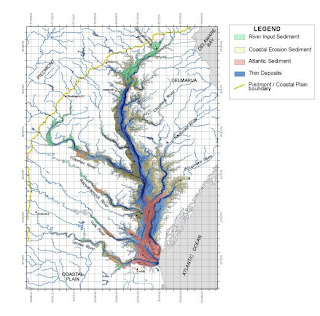 The Hudson Canyon represents extension of the Hudson River from New York Bay while the Norfolk Canyon is essentially the continuation of the "drowned river valley" that marks the Chesapeake Bay -- sometimes considered the Susquehanna River for its entire way, although the Potomac, James, and Rappahannock all add to the volumetric flow -- that continued seaward from the Hampton Roads area at the mouth of the Chesapeake Bay. Here is an interesting USGS Survey of the U.S. Atlantic continental margin.

Anyway, here is a YouTube clip of "Sailing By."

Speaking of the weather, here is a weather update for our area.

There was a complex weather system involving a cut-off vaguely subtropical low pressure (the National Weather Service did not so designate it but it probably should have) and a coastal front stretching at once point across the mid-Atlantic combined with a blocking high off the Canadian Maritime provinces that gave the U.S. East Coast from South Carolina northward a decent amount of rain over the past several days, although it has varied considerably by location. 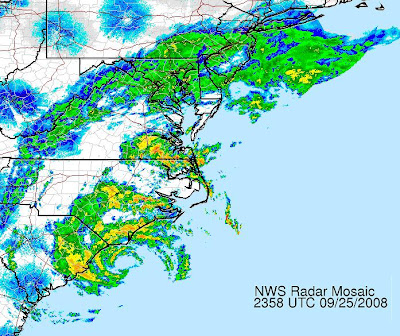 Here is a portion of the U.S. national radar mosaic from 2358 UTC (7:58PM EDT) 25 Sept. 2008. It shows what I consider to be a sub-tropical low off the South Carolina coast and the coastal front that was giving us a showery, cool night in D.C. 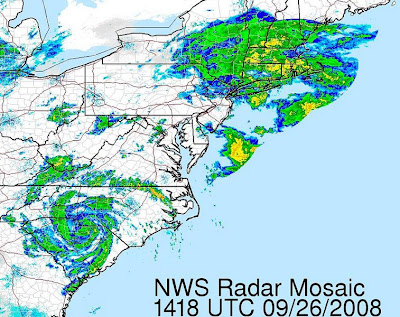 Here was the radar mosaic image for the same area from 1418 UTC (1018AM EDT) 26 Sept. 2008. The low with its tight spiral (a characteristic of tropical systems, which have a different temperature structure than extra-tropical systems) over northern South Carolina and the other area of rain lifting northward through New England. 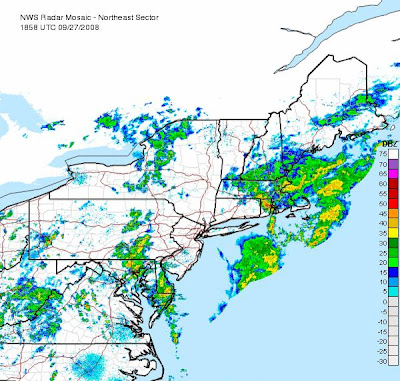 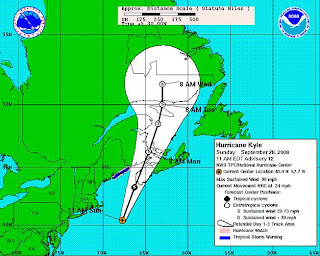 Hurricane Kyle, a category 1 tropical cyclone, is moving quickly NNE well off the Eastern Seaboard to an expected landfall near Yarmouth, Nova Scotia and move across the Bay of Fundy to a position near Moncton by 8AM Monday before tracking into the Gulf of St. Lawrence and -- on a somewhat unusual path -- actually transiting Ile d'Anticosti before moving into Quebec.

(Ile d'Anticosti or Anticosti Island is that weird 200 mile long island in the Gulf of Saint Lawrence that you don't know why it exists or how you would get there, much less who lives on it or what goes on there. Apparently only 266 people lived there as of 2001.)

Kyle will rapidly become extra-tropical (baroclinic versus barotropic) and eventually the remnants will probably get caught up in the prevailing westerlies that are strengthening at this time of year.

Another frontal passage is due in the mid-Atlantic by Tuesday nigh with noticeably cooler, breezy conditions on Wednesday. 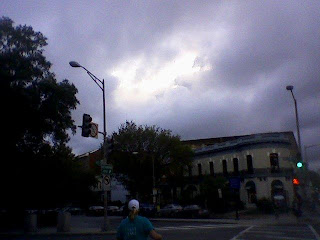 Below are three day totals since Thursday and not counting any additional precip that may fall today -- which is to say, through midnight Sunday (1159PM Saturday) -- at the three regional airports with monthly and year to date (YTD) totals, as well as comparisons to last year (when the region was in the throes -- not "throws" -- of a severe drought). 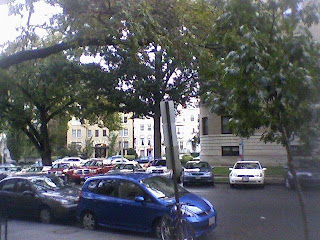 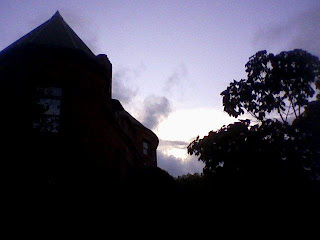 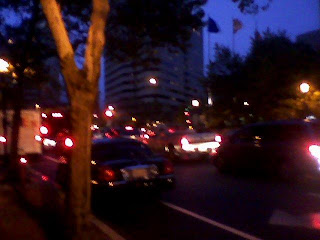 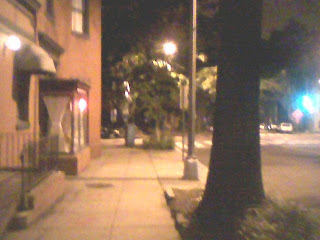 ^Notes: IAD records only go back to Jan. 1963, though they have been recorded at that same location. DCA and BWI records each go back to 1871 when the predecessor to the National Weather Service was established. (Snowfall records go back to 1888 and 1883, respectively, for the two locations). 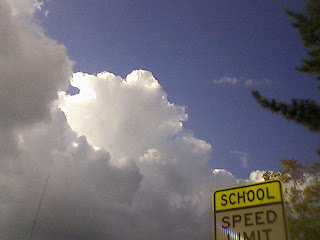 However, the locations of the recording stations have changed with the current DCA station dating back to June 1941 and BWI dating back to (June?) 1950. (Prior to 1973 was Friendship International Airport and its current "BWI" three-letter designation dates to 1982.)

These location changes have had significant consequences for temperature at BWI (much cooler than downtown Baltimore when observations were taken at the old U.S. Custom House) and arguably for snowfall at DCA (somewhat less at the airport along the Potomac River).

That's all for now. I need to get over to Phil and Stephanie's place and then go to their new place. My next update will probably be around Wednesday.

That was a very lovely and evocative post. I had a vision of a young man, listening to that BBC voice in the dark, and all the echoing with the sounds of the ships.

I love you, Fifi.

YouTube's Sailing By: I like the woodwind section wave-imitating arpeggios complementing the strings' main melodic line. Are those flutes? Clarinets? Other?
That said, the whole thing is suspiciously serene. Nothing in life can be that placid. Especially the sea.

I really can't come up with anything more intelligent to say right now.

BTW1. My program is not crashing anymore and the initial results are stunningly good even in the boundary layer.

BTW2. I think that what you and I had last night was the most sophisticated conversation yet. The bar is high now

I fully agree with today's letter to the WP Express. Dead on. Whoever wrote it.

Kristof: "That said, the whole thing is suspiciously serene. Nothing in life can be that placid. Especially the sea." Boo, you're screwing with my serenity. As it is, no one said the sea was always placid! You've set up a strawman argument.

Re. BTW2, YES!, that was THE MOST sophisticated conversation we've ever had ... it was scintillating, nay, titillating. How will we ever reach those heights again? Perhaps we can try tomorrow night at Bua's?

The stock market stuff and bailout failure is scary. What would Foucault say??

Re. the letter, I agree. Yeah, not sure who penned (emailed) it.

I love myself, best of all. I guess that's one reason i'm considered such a bitch. Why do men think women have to love THEM more then themselves? Why can't we just be equal? What does this have to do with your post? Nothing...

Handmaiden: Step off biotch! I'll smack you down. Regulus is mine first. Don't you go there! I'll rip off your press on nails and bonk you on the head with one of your own eggplants!

Regulus: I was just having fun up there ^^^. I wouldn't hit her with an eggplant. I'd ask her cook it!!

**text that followed deleted because it was too much, and you already think I'm insane freak**