(This entry is a bit incoherent.) 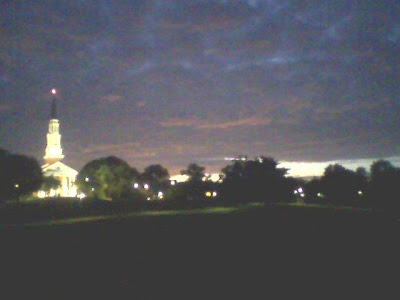 The University of Maryland Memorial Chapel at dusk, Sept. 14, 2008, Univ. of Md., College Park, with its tall steeple and now-LED-flashing top red light that so used to fascinate me. It used to be a "regular" light bulb and when it would blow out, I sometimes put in a call to Facilities to have it replaced -- and I'd get a WORK ORDER number for it. Ha ha. 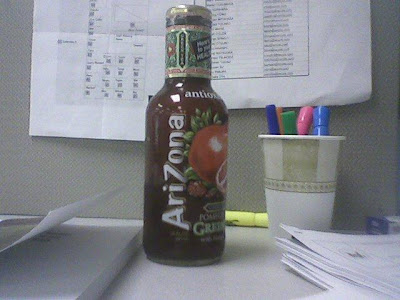 Sweet-tasting pomegranate green tea with antioxidant. It's both tasty AND it has 25% of the Recommended Daily Allowance of Selenium per bottle. Thank God.

I tried to write an entry tonight, but I just couldn't do it. I'm so tired after a long day and I need to go to sleep. I had a nice dinner at Bua's with Gary and Kristof. As it is, I TRIED, TRIED, TRIED to get what I thought was the most important thing to find today ...

AND JUST WHAT WAS THAT??

NO, not the 500+ plunge on the Dow Industrials yesterday and (today's little gain notwithstanding) the queasy feeling that the crashing stock market and collapsing brokerage house, mortgage and insurance giants suggest that the whole frickin' financial sector -- as its has developed after 25 years of GOP mismanagement and loopy, anything-goes deregulation and 8 years of grotesque Bush gangsterism, kleptocracy and Enron-style criminality-- threatens to collapse and take the economy down with it. 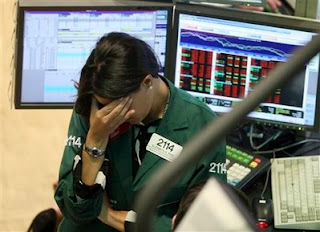 I don't think that will happen, though. Rather, the Federal Gov't will do what it must to avoid a repeat of 1929 - 1932 and bail out everyone, it will reinstate some of the brand new old rules that worked so well from the Great Depression until the 1990s bubble, and perhaps may try to sort out the good guys from the villains (although I doubt that since the latter are the big players, and in America, as a rule, we only go after the little guys).

As it is, Grandpa John "I invented the Blackberry but I don't know what email is" McSame has nothing to offer except some bogus "commission" to ignore everything.

Nor was my entry going to be about Gov. Sarah "Clueless Barracuda" Palin, a.k.a. the "Drilla from Wasilla" 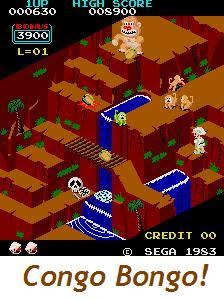 For any young readers, that's a pun on the old Joe Frazier - Muhammad Ali "Thrilla in Manilla" boxing match in Oct. 1975 that was a year after the Oct. 1974 "Rumble in the Jungle" between Ali and George Foreman.

As a political aside, I am really enjoying the new Rachel Maddow show on MSNBC, esp. since Olbermann on "Countdown" has become such an overheated, bombastic idiot in the mold of that shitty Nazi gasbag Lou Dobbs. 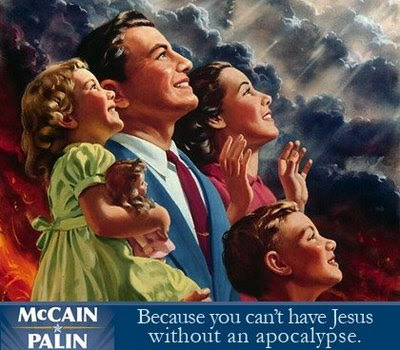 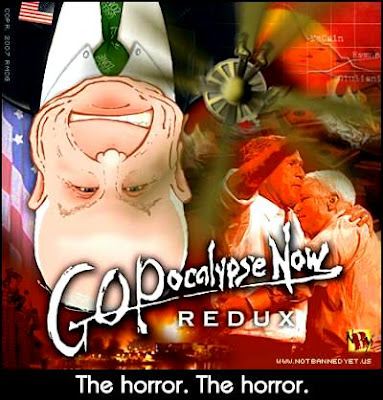 Nor was I going to write about my past two days ...

-- And it includes last night that my RCN cable and internet were both out for about 2 hours tonight -- and on the night I wanted to stay in and watch TV and surf the Web. Very annoying. Boo.

(On that last point, granted, it's not like being on Galveston island right now with no water, no electricity, few functioning toilets, no refrigeration, and a food shortage.)

As an aside, I will say that instead of watching TV or surfing the internet, I spent some quality time with my plush stuffed animals and wrote a song to Flippo my baby hippo. It's sung to the tune of the Beach Boys' Good Vibrations: 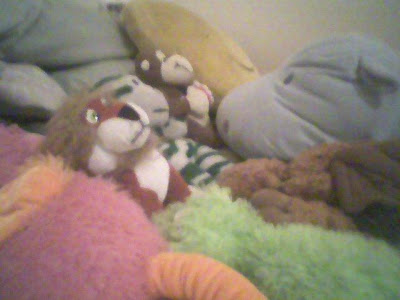 As a second aside, what is the following a picture of?? 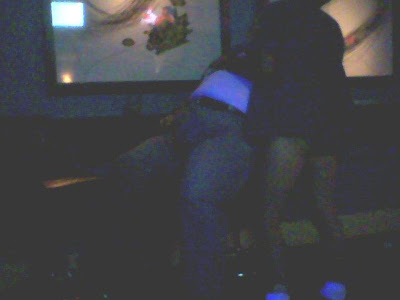 I wasn't going to write about any of that.

Rather, I wanted to post but COULDN'T FIND a YouTube clip of what happened 40 years ago today, Sept. 16, 1968. (I found at least two clips but they were on strange Web sites with which I didn't want to take a chance at embedding on my blog.)

What was this? I refer to an under-appreciated event involving future President Richard Nixon that probably helped him at least a little (so said Hubert Humphrey himself!) win his razor-thin election in Nov. 1968 (though I suppose Vietnam, campus unrest, race riots, and the mayhem in Chicago the previous summer at the Democratic Convention also helped!), and so FUNDAMENTALLY redirected American politics for the next two generations in a way that still reverberates: 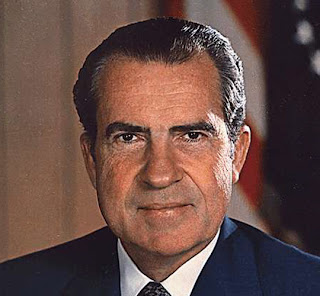 For those of you who might not know "Laugh In" with Rowan & Martin, it was a TV show from 1968 - 1974 that was a sort of psychedelic version of an old Vaudeville show with skits, funny songs, political jokes and offbeat humor. 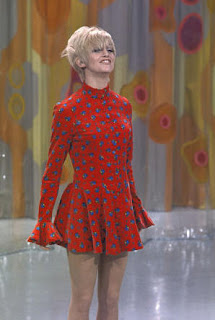 It starred the late Dan Rowan and Dick Martin and included a young Goldie Hawn as one of its regulars. I say psychedelic because the show was very much a creature of its era, including its sets, the wardrobe and hair styles, and humor.

If you go here, you can click on the embedded link and watch him say it (it's a 4 second clip). YouTube no longer has any versions of it. Boo.

If anything, it's an upbeat 2 minute sing-a-long. And compared to today's thuggish, criminal, corporate fascist, Southernized, fundie whack job Republican Party, I suppose that's actually true. I mean, his sense of a larger national purpose, his mercantile bent and his failure to embrace today's self-parodying fundamentalism would never endear him to today's GOP. But it's also true that Nixon is the spiritual godfather of today's GOP.

Tomorrow, I'll be able to slog through this entry...Tonight food is paramount.

Don't worry about it. I updated it -- as usual with my entries -- 20 times before I'm satisfied with it, at the expense of sleep I desperately need.

So much here to contemplate...

All of the above & the Nixon/Laugh-In nostalgia, reminds me of the lines from the song by, "Country Joe & The Fish" from way back, during the Viet Nam era:

I'm glad I made a conscious not to have a television, I certainly don't feel any worse for missing all this bad news.

My own life is precarious enough, living on the edge of existence, with half the town waiting with bated breath for me to fail...the other half sure I will.

I would love to write something but I don't know what. I've done a decent job Fortran programming though.

I know it's apropos nothing

my parents used to watch laugh-in.

Handmaiden: Stock market better today. Up over 400 points on the Dow. THEREFORE, Bush is God again and we can all vote for Palin-McCain, er, McCain-Palin.

Seriously, though, you sound kind of down. The council seat race was always going to be hard and newcomers don't always win, esp. ones with views that while they are well thought out and conscientious and progressive to you, sound jarring to folks used to GOP slogans, jingoism, and so forth. As it is, you have courage and ability I never will have to be able to do what you are doing. It's a noble and sublime deed no matter the outcome.

Fifi: Laugh In was on in Australia?? Interesting.

yes, it was, in fact now I think about it a lot of the dialogue actually became part of the family parlance.
Lots of American shows were on here!

Handmaiden, what is it you are doing? I had a look at your place but could not see.

ok, comment part 2:
That bus shelter image is really disturbing.
Was it some kind of mating ritual or an assault?

those two people grappling in the dark, aren't they in a bus shelter?

No, that's an old fat guy and a tired hustler at Omega, a trashy gay bar here in D.C. around 130AM last Saturday.

Wow, Nixon was really making a play at the hippie vote, huh?

It seems American attention spans were a lot longer 36 years ago.

"Handmaiden here," coming at you from my local political blog.

Yes, what you say is right. I'm not regretting running in the least. I knew what was going to happen & I willingly took on the challenge.

Unfortunately, my daughter(28) got arrested last week. That set the naysayers to crowing. I won't go into the details of the trumped up charges, but foolish girl that she is, well...she was a sitting duck. Besides trying to set the record straight & feeling guilty that, me being a political target, got her into this(I don't know if it is true, but I have to wonder). Anyway, it just gets a bit much.
But! All that this sort of thing does is steel my resolve & make me more determined to forge ahead.

"Wow, Nixon was really making a play at the hippie vote, huh?"

Crazy, man, like, psychedelic. Good vibes, man, as long as you don't look too closely.

"It seems American attention spans were a lot longer 36 years ago."

Indeed! If that were today, it would be a hectoring, hysterical 25 second ad about irrelevant and stupid bullshit with some flags and eagles thrown in. Then it would be followed by a Viagra or Cialis ad (did I spell it right? I'm not going to check the spelling via Google at work).

By the way, I may be going to Adam's 30th birthday party on Saturday. His birthday was this week (either Tues. or Wed.) along with another friend named Adam who is an ex-JW whose birthday happens to be one day before or after his. Strange.

CC/Handmaiden -- I'm really sorry to hear that. It sounds like it was a "strategic" arrest to undermine your campaign.

I say we take a trip to Mt. St. Helens and throw in a paper machete effigy of our least favorite political leaders.