Two hippos in a pod

I still haven't gotten that aforementioned entry posted and I'm going to take a walk with Gary today in wilds of Rock Creek Park this afternoon. 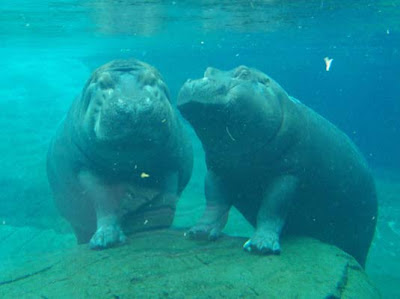 I just wanted to post -- as part of my three-to-five entries a day blogging frenzy -- to post a picture of my boyfriend and me taken at the community swamp pool the other day. All the other hippos were GREEN with envy. A-hehehehehe ...

Speaking of hippos, the WaPo has an article linked here about why the National Zoo -- whose mismanagement is legendary -- is planning to send away its ONE Nile hippo next year. Boo.

Alan's hippo imitation is something else to behold!

Thank you for talking to me tonight. I was a little perturbed about everything. You're the best, Quill. I love you, sweetie.

So. Getting aquatic these days?

I can only say that I approve.

Interesting link to the the Zoo article. I felt a lot of empathy for "Happy's" keeper. Having a relationship with an animal for 13 years & then knowing it's just going to end is pretty sad.

sometimes I blog hop from here based on commenters profiles. Sometimes this is exceptionally tedious.

Thank God you are at least obsessed with something other than your own body and what you eat.

Handmaiden: I know I keep saying I'm going to give you a call but then I never do. Bryan said you have a land line number that might be preferable owing to cell phone reception issues. E-mail me the number if you like.

Yes, I think it rather sad that this man has to give up something he so obviously loves and that is so meaningful -- all relationships with hippos are meaningful, come to think of it -- for such a silly reason. The National Zoo really has some serious issues.

Kristof: It's no biggie.

So we are on for dinner tonight at Bua's?

Fifi: I don't know "Toby" (not his real name) at all, except to the extent I've looked at his blog.

I was going to post some thoughts about him in this comment, but now I can't really focus now and maybe it's best I don't. Bottom line, he is just a human being in a world full of human beings with all their swooshed together characteristics that run all over the place, good and bad.

He's a rather good writer and quite intelligent and perceptive -- there's no doubt about that -- and quite sensitive. His oft-repeated body obsession ("dysmorphia is the word he used to use a lot) is sometimes a parody of a young gay man, and he undoubtedly has played that up on his blog. But it is also true that is the gay urban culture he very much inhabits and embraces, as does Mr. Sirius, and the bottom line result is he is turning into that outward buff, muscular stud he always wanted to be.

(Meanwhile, I'm beginning to get the shape of an orangutan -- you know the ones you see at the zoo sitting in the shade all squat in veritable ball -- ha ha ).

Don't forget Toby is rather young, too (mid-20s). As for his relationship with Mr. Sirius, that's just not my place to talk about it in a public forum. They seem to be genuinely happy with each other. They'll probably be together for a long time, and I'm happy for them.

He is probably actually more embracing of the world around him than Mr. Sirius himself. Less jaded and easily irritated, if you will, but sometimes that just an age thing. I can say that as someone who is nearly 39 and feels nearly 59.

Anyway, that's enuf. As I said, I don't know him at all. I can imagine what he thinks of me just based on what he's heard and not actually knowing me.

Toby, go back to the Guido-land whence you came. We're all full up of you bitchy, whiny, loud yankees down here south of the M-D. You're boyfriend ain't funny, and he has the affected diction of Professor Henry Higgins:
"Dee-lee-yah. Stay out of the Wah-ter."

Be nice, JohnnyReb. Your beef with him sounds personal on your part.

I would like to point out that I'm also (half) Italian American from New Jersey / New York / Yankee Land.

P.S. That was Toby saying that in that video, not Mr. Sirius, and he was just practicing his elocution and deportment lessons.