Well, Blogger's photo uploads seems to be OK now, and I suppose I really oughta be more patient, since Blogger works well, like, 95 percent of the time. I've just posted a series of pictures from the past several days. 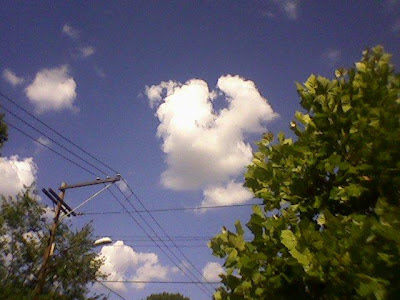 A puffy fair weather cumulus cloud in an unusually blue summer sky over Washington, D.C., as seen from Longfellow St., NW, near where Gary lives, Aug. 3, 2008. 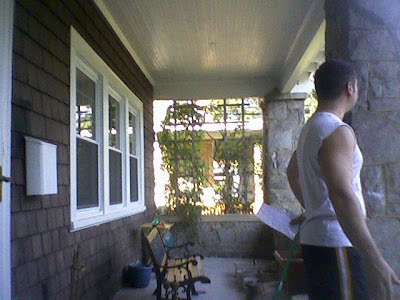 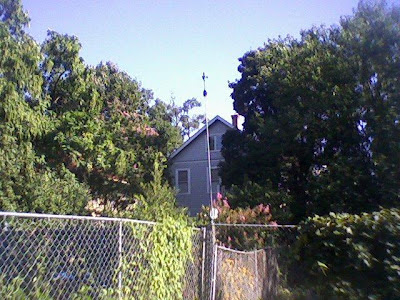 Here is a weather station in the backyard of a house off Longfellow St., NW, as seen from the back alley. D.C. has a warren of such back alleys. I love houses like this that crouch in the summer time trees and vegetation like that. Sometimes there is something a bit spooky when the house seems particularly empty. Maybe I'm just thinking of that scary-ass horror movie Burnt Offerings starring crazy Karen Black.

Data for this little unofficial weather station is here. 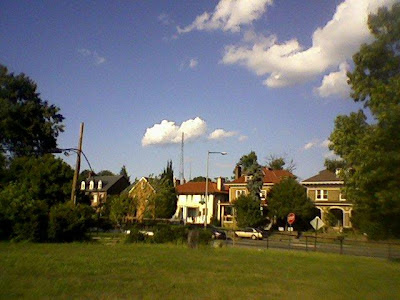 The view from part of Rock Creek Park looking at 16th St., NW. That is the Hughes Memorial Tower in the distance, a.k.a. the Mr. Sirius Things Remembered Tower. Speaking of Mr. Sirius and the entry from the other day, see below. 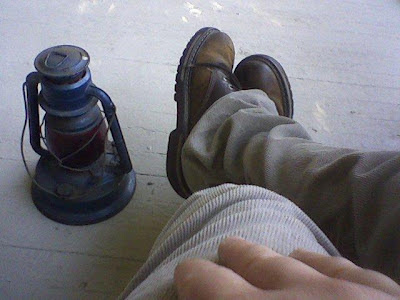 Regulus sitting on a porch swinging chair next to a lantern, Aug. 3, 2008. 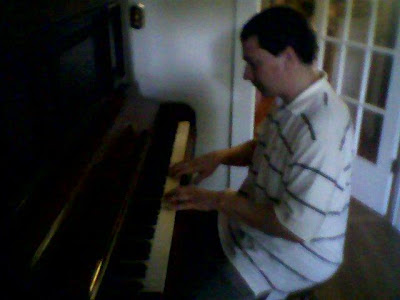 Yours Truly, Regulus -- looking and actually BEING fatter than ever in my life and it's getting really unpleasant and I gotta do something about it -- at the piano in Gary's place.

The following pictures were taken on July 31, 2008 in my first ever trip to the brand spankin' new Nationals Park baseball stadium in the Navy Yard section of D.C. (that replaced a legendary gay male go-go bar / sex club strip that dated back to a time LOOOOONG before today's 'gayborhood' and 17th St., NW, when it was a very different experience to be a gay man in the Nation's Capital). Of course, those places actually were kind of fun, too, on a Friday or Saturday night, esp. the drag show at Ziegfields. I wrote about the closing of Ziegfields/Secrets on my Arcturus blog in March 2006. I'll post the link later here. 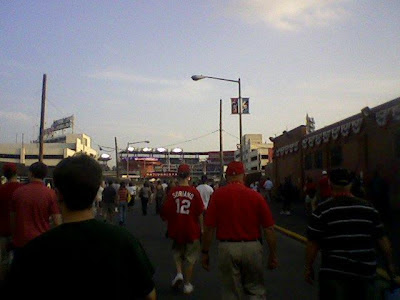 Walking from Navy Yard Metro toward the stadium down Half St., SE, which runs between South Capitol St. and 1st St., SE, not to mention New Jersey Ave., SE. This used to be a scary ass stretch from M St., where the Navy Yard Metro is located to the legendary "Unit Block of O Street, SE."

Actually, those places used to be kind of fun in their way -- Secrets/Ziegfields and La Cage aux Follies in particular. I used to go there with my friend Brian on Fri. or Sat. nights from late 1992 - mid-1990s during my early days in D.C. 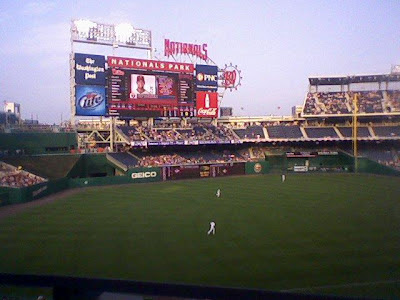 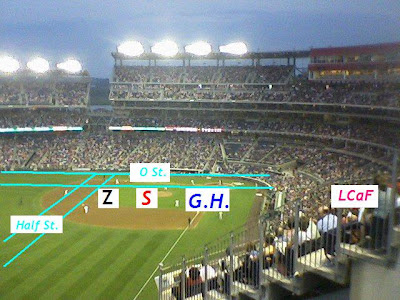 OK, based on my walk about the stadium and looking at where Half St., and O St., SE are/were currently located, I surmise the location of that most of those places where RIGHT on the stadium field. The "Z" was the Ziegfields drag show place and the "S" is Secrets, the male go-go bar with the naked dancer boys up on a bar in nothing but some socks. "G.H." is where "Men's Glorious Health and Entertainment" -- a.k.a. "the Glory Hole" -- was located. It WAS basically a sex club. No, I never went there. The "LCaF" is where La Cage aux Follies, the original go-go bar that actually closed in the mid-1990s.

Did you know there was a papal mass here a few months ago?? I'll bet there aren't too may places where the Pope has been that PREVIOUSLY was a sex club. 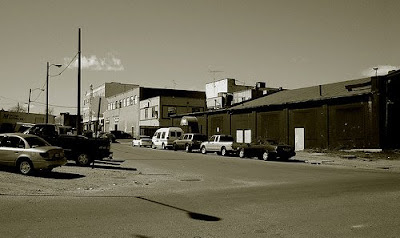 Here is what the Unit Block of O Street, SE, used to look like. This would have been the image basically from the far end of the stadium in the above image looking northward. ("Unit" block refers to numbers from 1 -99 for street addresses, within 1st. St. NW/NE/SW/SE). Here are more images (scroll down) I found off the Web of what it used to look like from March 2006. I so had wanted the actual street sign at the intersection: "O St., SE, Unit Block" and "Half St., SE, 1300 Block." I wonder where it ended up.

Secrets/Ziegfields (the same establishment basically) were in the large black building on the right. The "Glory Hole" is located next to where that white-hued car and van were parked. "La Cage," as it was simply known was at the corner of S. Capitol and O St., SE. There was also a video rental place and a movie theatre, of a sort ...

Some of these places are trying to relocate but are having a hard time since they can't readily get zoned anywhere and there is much resistance to replacing them. Those places sort of just landed in what had been a blown out warehouse district by about 1970, long before JRs, Cobalt, and the world of 17th St. as it now exists. 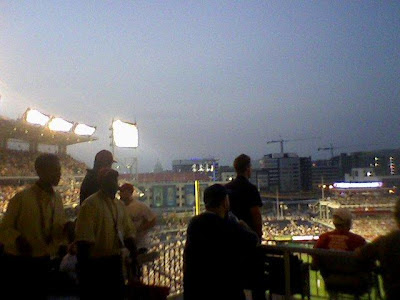 Another stadium view from the third tier. By the way, that is actually the U.S. Capitol dome about a mile away visible in the image just under and to the right of the stadium lights. 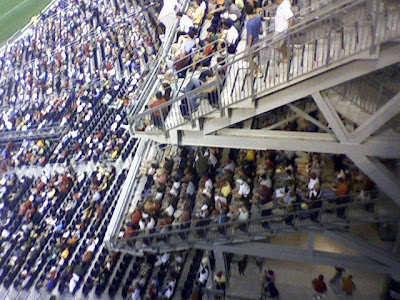 And a touch of vertigo. 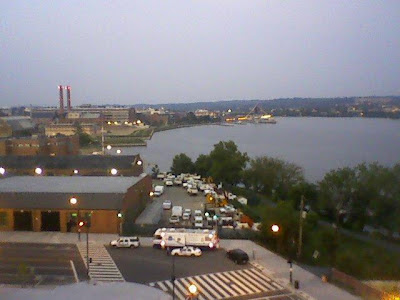 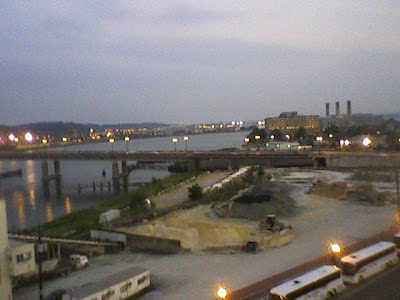 The "downriver" view of the Anacostia River toward the Potomac, past the Frederick Douglass Bridge (the South Capitol Street bridge over the Anacostia). If someday the sewage smells of the river are ever dealt with -- and that in itself is a long story -- maybe this area will be a lovely tourist promenade. Of course, Baltimore built its Inner Harbor complex even though the water is totally disgusting. 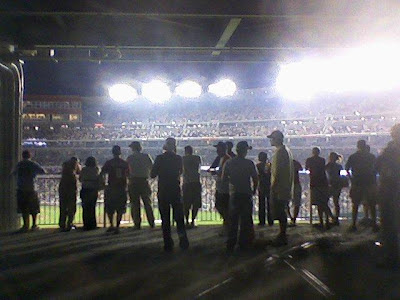 Silhouetted figures at Nationals Park stadium at a baseball game Thursday evening, July 31, 2008. I went there with my friend Kevin. It was my first time at the brand new stadium.

The baseball game was between the Washington Nationals and Philadelphia Phillies. At least a quarter of the crowd were Phillies' fans. The Nationals pretty much suck and, not surprisingly, they lost 8-4, but I had a really nice time.

Lastly, concerning my previous entry and the comment posted by Mr. Sirius's boyfriend, I really don't know what to say, except (1) I suppose I invite stuff like that by writing so much about him/them and (2) I was NOT implying in that entry that they were somehow fat like hippopotamuses, and that is hardly true anyway.

I was trying to say that they sort of look alike these days. Perhaps, metaphorically speaking, they will coalesce to create a stunning new celestial object in the D.C. gayborhood cosmos.

Speaking of coalescing or otherwise interacting celestial objects, below is an image from the Gemini Observatory in South America of two very far away spiral galaxies, NGC 5426 and NGC 5427, known collectively as Arp 271. They are in a grand and glorious dance with "star bridge" between them created by the powerful tidal interactions with stars hurtling toward one or the other "island universes," even as new star forming regions are ignited by the gravitational push, pull, and squeeze. 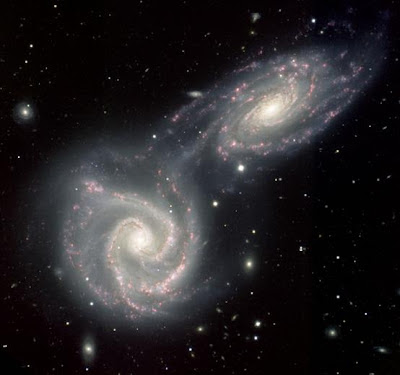 Arp 271 is located 90 million light years away deep in the Virgo Supercluster. The two galaxies may not (immediately) merge but rather NGC 5426 (in the upper right) will sweep around NGC 5427 on a parabolic trajectory. It is possible that eventually, they may move coalesce into a single, smeared out, larger elliptical galaxy. (Actually, what we are seeing is from 90 million years ago, so who knows what "is" happening right now there.)

Over own Milky Way Galaxy and Andromeda Galaxy may do this in about 5 billion years, except our Milky Way is a barred spiral galaxy.

And on that note, I'm going to bed and good night everybody.

Don't it always seem to go,
That you don't know what you've got
Till its gone
They grassed all the gays
And put in a baseball pitch...

I'll re-post what I wrote below, in case Toby doesn't see it there:

Toby, go back to the Guido-land whence you came. We're all full up of you bitchy, whiny, loud yankees down here south of the M-D. You're boyfriend ain't funny, and he has the affected diction of Professor Henry Higgins:
"Dee-lee-yah. Stay out of the Wah-ter."

Fingers -- It's too bad that, should you ever visit D.C., that block is gone. Boo.

Be nice, JohnnyReb. Your beef with him sounds personal on your part.

I would like to point out that I'm also (half) Italian American from New Jersey / New York / Yankee Land.

P.S. That was Toby saying that in that video, not Mr. Sirius, and he was just practicing his elocution and deportment lessons.

I meant to write a post-script about accepting you in all your ethnic yankee-ness! Well, I've never met Toby, but I did stumble upon his blog a couple of years ago. And I LIKE the beefy look - I just hate the whole "14th/17th Street Attitudinous Bitch" attitude that so many of our local gays have. In short, he (not MS) overenunciates and sounds prissy. And I won't have anyone upsetting my delicate [Regulus]!

Just practicing my own elocution ... "Around the rugged rock the ragged rascal ran..."