In the middle of the night ...


Updated with video -- see below 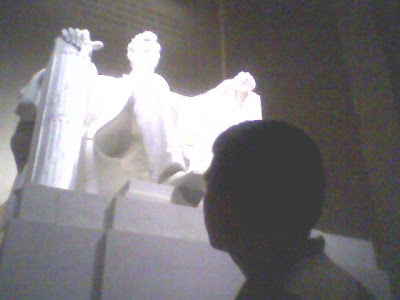 I apologize to my readers for my previous entry, since I know it did not make a lot of sense. Long story short, I was upset about a few things.

Anyway, I plan to have a new entry up later today with stuff about my 3AM -430AM walk with Kristof and LP after the bars closed [we were at Omega, where Kristof and I had gone after Cobalt] from the Dupont area here in D.C. to the Lincoln Memorial and part-way back before taking a cab the rest of the way, as we were pretty tired at that point. I live about 2 miles from the Lincoln Memorial. I used to go down there a lot in the wee hours like that ... not just before my 2004 annus horribilis, but before 9/11 attacks that turned the area in to a frickin' police state war-zone.

Just because it was stuck in my head this afternoon ...John Paul Young's song "Love is in the Air".

I first saw the video at JRs (yes, that JRs) some years ago, (long before he was there). The part of the video near the ending involving the love arrows being shot into the couple before they ascend to heaven is actually slightly jarring. As for Young himself, he looks like he's sort of frozen through the whole song. The very ending where you hear The Muppet Show characters Statler and Waldorf is actually kind of funny.

The original 1978 version sung by a much younger Young is here.

The contrast of the two videos, reminds me of the difference between youthful idealism & the more realistic view that is gained by age & experience. Both views are important & valuable of course. I love being around the old & the young & the in between.

I love that song - it is hard to get out of your head. I think the later video was made in conjunction with the excellent 1992 Australian film Strictly Ballroom.

aaagh! make me cry why don't ya!

I was a little kid when that old one came out, and I loved the resurrection of tat song which was indeed for strictly ballroom.

My friend produced a series for the ABC called Love is in the Air, and it was just fantastic. So JPY got a lot of replay action from both the movie and the series.

Handmaiden: Thanks for that comment ... and, YES, that ending was quite funny. I laugh every time I hear it.

BolshoiPavel: THANK YOU for telling me the year ... 1992 ... I couldn't find the year for this video with the remade version of the song.

Fifi: Oh, sweetie, I didn't mean to make you cry, but if it was a happy memory overall, then it was worth it.

So you knew somebody who worked at ABC? Interesting!

Thank you for posting a link to the real video. I thought I was gonna have to find it myself. Darn I feel old now.

Sorry about the strange message the other day. It was an interesting tour. That's something I'd have liked to do with you or "blind guy"... cept he's blind, and what to do with you if you came here?

Australian Broadcasting Commission, not american of the same name .
I also meant to say how dang terrifying all that statuary lookS, I don't know whether Abe looks more scary than Al, or vice versa.
Actually, the glowing ghost of Abe is defonotely the more spooky.
And a look at Kristof. Cool. Very cute.!

I sort of felt sad when I saw that clip. Everything was so different then, and Paul Mercurio sort of dropped into obscurity after that, I think. He was originally with The Sydney Dance Company, which I used to love. He certainly celebrated breaking the boundaries of the human body, that's for sure.

I just got your comment :-) I'm supposed to be painting.