The Waters of March AND May ...

**Updated July 4, 2020: Yes, 12 years after the fact, I updated this entry to remove all the "Mr. Sirius" horseshit, plus any immeidately related crap. It has been my intention to do that with all these old entries anyway. 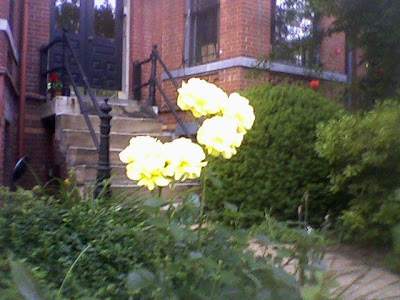 Above: 1500 block, R St., NW, Washington, D.C., this past Sat. night. This entry is being finalized around 430AM Sun. morning (May 25th, 2008) after a very nice night at Cobalt with my favorite bartender and then at Town with Gary in what felt like a sort of weird "Old School" Nation night (circa Summer 2000) that, alas, in the end could not hold a candle to that place. Boo.
Phew. I had a very busy but overall very good week, which is why I wasn't able to update my two blogs as planned. I'm FINISHED with my coursework for my graduate program. 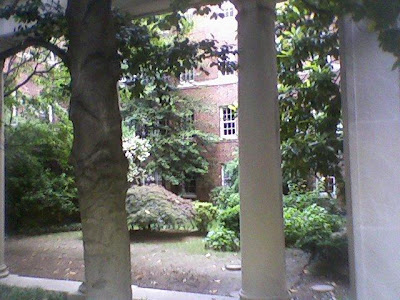 Today was busy with chores -- laundry, feeding Stephanie's cat, going to campus to clean out my locker and print out some stuff, grocery shopping, making dinner, and now writing entry -- that took me on route from home to Phil's place to College Park to take care of a few things, and back home that entailed several miles of walking and riding the Green Line Metro rail.
While walking, I managed to pinch a nerve in the left side of my neck. It hurts like hell and it's hard for me to turn my neck. Uh, oh. But I'm home now in my wee efficiency -- now lit by TWO lamps and the window a/c purring. I'm watching the Britcoms on MPT (they're actually on tonight). Gary is supposed to come over in a bit and we are planning on going to Cobalt.
I had to feed Stephanie's cat, Jasmine, as well as Phil's tropical fish, because Phil and Stephanie are in Paris with Chris and David until Tuesday. Stephanie and David have both lived in France (David is from there). Phil lives a few blocks from me now in D.C. near Belmont and 17th St., NW, across the street from the Meridian International Center. 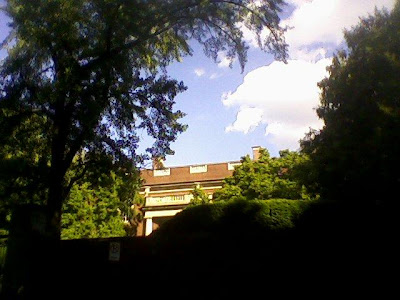 Above is a picture of the Meridian International Center as seen from the 1600 block of Crescent Pl., NW. Here the Web site to the place. Almost every night there is some event going on there. 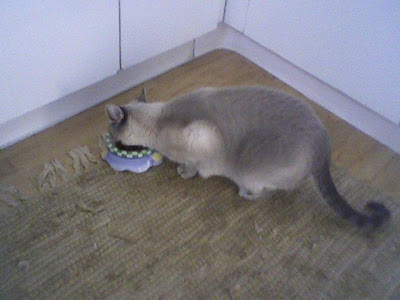 Last night, when I went there around 1130PM before going to Cobalt. Jasmine (pictured here) is a cat who was never socialized and is somewhat crazy. She hissed and cat-growled, and made to lunge, swatting at me, her ears back. All I was doing was trying to put food in her bowl. Jasmine looks like "Bucky" in the comic strip "Get Fuzzy."
Today, Jasmine was much less neurotic and only hissed once.
As it is, except for my dad's 18 year old cat, Pyewackett down in Florida, I'm more of a dog person. 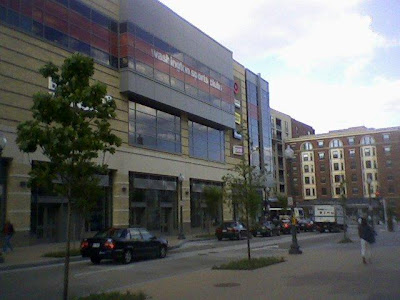 The ASTONISHING change at the corner of Irving St., NW, and 14th St., NW. This FINALLY transitioned from boom-boxed, blown-out ghetto wasteland EVER SINCE the MLK Jr. assassination riots that destroyed the neighborhood -- to what you see today.
*******


Tomorrow, I'm spending the day with LP in Montgomery Co., Maryland, hopefully driving about. I want to visit Garrett Park and Washington Grove, two interesting suburban tree-filled suburban enclaves. On Monday (which I have off), Gerry and I (and maybe Gary and Kristof) may take one of our drives about the suburban wilds of Northern Virginia. I have my eye doctor follow-up appt. on Tuesday and I return to work on Wednesday. My job transitions to a full-time salaried one with benefits the following Monday (June 1).
This is my third master's degree (!), but this one so far is working out the best. 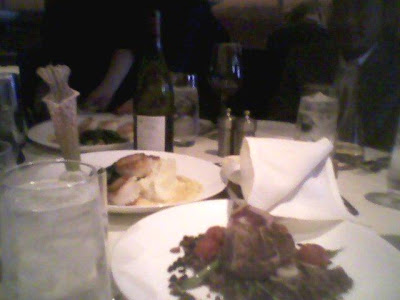 Yesterday evening, we had an office happy hour and dinner in Bethesda (where I work) at Black's Bar & Kitchen on the firm's tab.
There are several Black's in the Maryland suburbs, including Black's Bar & Kitchen (Bethesda), Black Market Bistro (Garrett Park), Blacksalt (MacArthur Blvd., Wash. D.C.), and Addie's (Rockville). The Bethesda one includes a raw bar.
My boss and the founder of the firm were there, as well as four of my co-workers. It was the second Friday in a row where I was part of a $450 to $500 dinner on someone else's tab (!).
Last week, it was at Cafe Japone on P St., NW, with Phil and others that also included a show at The Improv on Connecticut Ave., where we saw a real(ly funny) comedian, John Pinette
******* 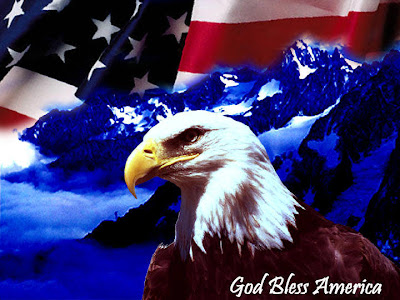 If you want to get a glimpse of Reagan era American optimism that even a mal - content such as me can appreciate and be moved by, read on ...
Below is an approx. 1 min. YouTube clip of what I consider to be one of the best advertisements of the 1980s. It is one of the "Coke Is It!" ads. I believe there were a number of such ads from the mid-1980s.
This one is from 1985 (when I was but 15 years old) and the ad lyrics are set to the tune of the wonderful bossa nova tune by Antonio Carlos Jobim entitled Waters of March except this is in the form of a power rock ballad style (of the 1980s "hair bands") that was popular at the time.
This ad was filmed in 1985 when the Statue of Liberty was in scaffolding for renovations ahead of her 1986 centennial. That is relevant to the NEXT point 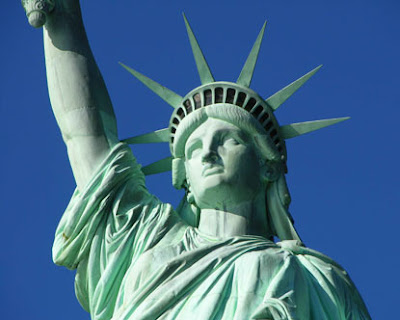 This is TOTALLY an "answer" to the Planet of the Apes apocalyptic movie of the time in which the ruins of the Statue of Liberty rises out of the ocean in that legendary scene.

In other words, by contrasting a small girl on a beach with the Statue of Liberty in that final scene, you are getting the "answer" from 1985 to nearly a generation earlier in 1968: America's best days are AHEAD of her!


The space shuttle imagery ("IT IS TOTALLY NOW!") is my favorite -- and all the more bitterly ironic because it was just months before the unnecessary Challenger disaster. 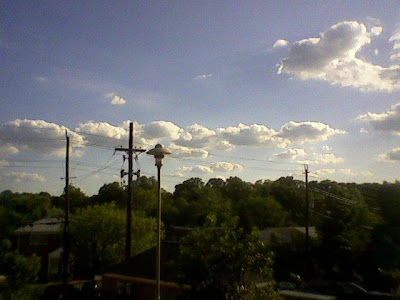 Your third Masters! Yay! I'm so impressed & very happy for you. A big platonic virtual [[[hug]]] from me.

Please don't judge all cats by one psychotic feline. I try not to judge all dogs by the one that bit me. Although, I think I'll stick with my fish.

all about me... My neck has been hurting for weeks. I slept on it wrong.. then I noticed I also carry my bag on that side.. I've been trying to use the other side instead but it's not working. Habit. I keep using the one side. Grr.

I was NOT in Michigan!! lol

Handmaiden, your fish is my wallpaper du jur.

Why aren't there any gay weathermen on TV ??
I'd happily take the forecast from a gay meteorologist. I don't think it's appropriate to camp up the sports reporting but the weather is a whimsical, ironic sort of thing which might lend itself to a bit of attitude...

All the weathermen I see are gay... or at least on the bisexual side...

Even that kinda hot one I see on The Weather Channel... He's not gay. Not at all. My gaydar doesn't go off. I think he wouldn't mind some fooling around tho, as long as nobody found out.

Thank you, Handmaiden. I appreciate that.

As for the cat, Jasmine, she was mostly OK the next three times I went there. It was only Friday night she was that psychotic. I think she was just hungry and me coming in at midnight into a dark house may have scared her.

Bryan: Sorry to hear about your neck.

As we discussed last night, I too was not in Michigan. The weird thing, though, now that you mention it is that I had a dream in which I was with my friend LP walking around Detroit on a gray, chilly fall day.

As for your second comment, if you're referring to Carl Parker, I think he is in fact gay.

Fingers: Sorry, dude, but either things are VERY different in Australia or you aren't paying attention. Male TV weather forecasters are almost de rigeur gay in the U.S.

Nope, I didn't mean Carl. Jim Cantore, I think he's hot. I think you're... Oh, nevermind, you already know I would like you to... *sigh* nevermind.

I am sorry about our odd little misunderstanding. I know you weren't in Michigain. Apparently I was... even tho I wasn't.

Jim Cantore gives me the piles.

And to quote Fedde Le Grand and his House single, "Put Your Hands Up 4 Detroit"!