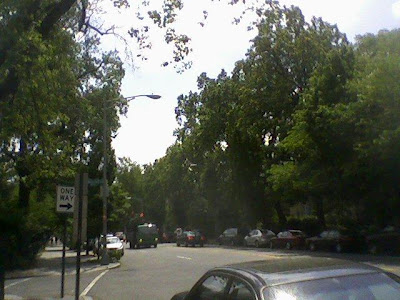 A picture of the corner of 16th St. NW, and Corcoran St., NW, Washington, D.C., May 5, 2008, on a pleasant, flat sort of spring day, the natural world already in full leaf-out, as it were. This is a block from where I live and about a mile north of the White House.

I stayed home from work today because I was (and still am) not feeling well, fatigued and upset stomach. However, based on some email traffic from work, my big fear may have been unfounded. Or as some of my friends tell me, I was catastrophizing. Again. You'd love my full blown panic attacks. They're something else. I have to lie on the floor. I'll try to take a picture next time.

Anyway, I listened to a 2 hour hearing on carbon cap-and-trade before the Senate Finance Committee from April 24th, though it took MUCH longer than that using Real Player and playing it back again and again. I wrote up what became a de facto 10,000 word transcript. Admittedly, not a very efficient way to work. 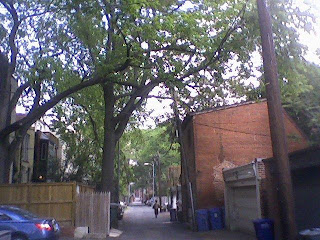 I'm writing a memo for work. I also have to do some school work tonight for tomorrow.

I went out earlier for a walk to Whole Foods -- why I go there for lunch, I don't know. I don't really like that place.

And it's always overcrowded and overpriced and pretentious and weirdly stocked with impractical items, but it does have a hot bar, which was the part I was going to. I don't actually go there that often. 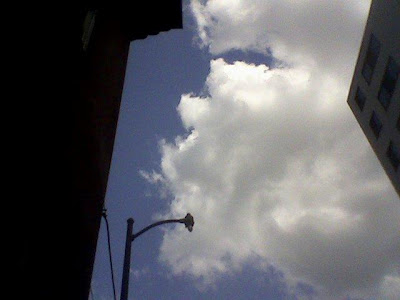 There were no Mr. Sirius Deneb Sightings over in that part of the D.C. Gayborhood of a sun-flooded D.C. spring day. As it is, based on extrapolated trends, I probably won't see him again until Thanksgiving. Also, based on current trends, he won't look at my blog(s) until April 19, AD 12,478.

I wanted to walk down to the Potomac to take a stroll and see it -- no, it's not quite the same as the ocean, but the closest I'm going to get in D.C. -- but I felt kinda tired and I wanted to finish the above mentioned write up. 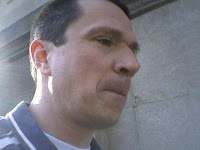 Yesterday, Stephanie cut my hair (and Phil helped) even as they were working on cleaning out the big fish tank, where evolution went into an algal and plant overload and it looked like a swampy lagoon in there. The fish tank, not my hair. Boo for you thinking otherwise.

I was covered in hair at this point in this picture and had to go home and shower, my second for the day.

Later, Gerry and I went to Larry's Lounge after Cobalt with Kristof. Then we went to the Diner on 18th St. in Adams - Morgan for a late dinner. Then I talked on the phone for nearly 90 minutes with my dad before I finally went to bed around 2AM. I had already decided I wasn't going into work. I didn't see LP because he's busy with extended family visiting from England, and Gary was in NY this past weekend visiting his dad and sister. 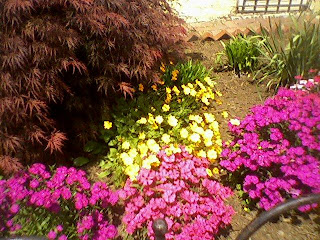 Let me just last say that I really want to apologize to my Blogger Buddies. I have not been by anyone's site in well over a week, at least to really read the entries and comment. My apologies. My blogging and cross - blogging activities just aren't what they were a year and a half ago.

Nice pictures of the neighborhood on a pretty spring day. You always take good photos. I especially like the one of the alley, since I'm a fan of DC's alleys (there was one behind my house where we all played when I was little). I used to think I might wander the city taking pictures of alleys and publish them in a book. Just one of my many plans that never came to anything...

Thank you for your comments re. my picture taking ability.

I understand well about things not coming to pass.

Did you see in -- of all places -- this week's Onion about strange place names in the D.C. / Baltimore area? There were two in D.C. proper: the "Swampoodle" section of D.C. located around 1st and H St., NE, near a railroad track ghetto-y 'hood near Union Station, and Quackenbos St., NW near my Mr. Sirius (Hughes Memorial) Tower.

I haven't had much time round the blogworld either:
busybusy.

Plus I have had root canal a few days ago, what a joy, and now I have a cold too so I feel pretty crappy.

but anyway, I am sorry for all the business with work and the anxiety and all that....

I had no idea you and Gerry kept partying so late. I went to bed early that night and was sleepy the next day anyway. I blame old age.

So you're planning to see Sirius Phallus Maximus around thanksgiving?

Fifi: So nice to hear from you, sweetie. I'm sorry you aren't feeling well. I've never had a root canal, though I had a nasty gum infection in Jan. - Feb. 2000 that nearly killed me, or rather it would have but for the antibotics. My face on the right swelled up and I looked a real fright. It was ugly. I've never been in so much physical pain before.

Are you going to be getting a crown with the root canal?

there are such stars on my sky:-)
but OK

oh funny you should ask.
Yes, supposed to get a rown but I'm too scared to ask what the bill might be like.

I have a sore throat as well now, since we are currently swapping ailments.
I listened to an interview with a woman with terminal cancer on the radio yesterday. By the end of it, I convinced myself I had cancer myself. I was rather relieved to have a sore throat ... so , I am happy to have germy tonsils and not bone cancer.


anyway, not too sick to paint. No classes today, so I'm off to wield the brushes. Then take my cubs off to buy shoes.

I knew you were full of something, Baby Doll.

Fifi:Of course it makes sense -- you were just putting things in proper perspective.

Is the dental industry the money-making racket it is in the States?

Well, take it easy and don't overdo it, esp. if you aren't feeling well.