My friend Gerry took this picture of some Kwanzan cherry trees at floral peak the other day near where he works in Crystal City (Arlington), Va.

OK, I just wanted to post a quick update. I won't be able to post a proper entry until this weekend. My final paper for my environmental project course is due 1159PM Friday -- that's "midnight Saturday," although everyone insists on saying "midnight Friday," though that would be actually be the minute after 11:59PM Thursday. 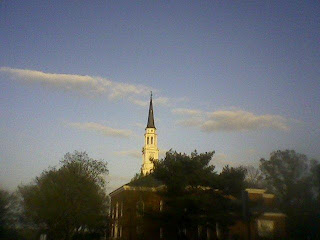 I am going to try to post that final entry on my Arcana From Arcturus blog I intended to post. I already have posted the first of the two part entry. I direct any readers I have there for that entry. Those are the ones about Mr. Deneb (who there is referred to as Mr. Sirius). I saw him yesterday in passing by chance, my first Sighting in 5 months to the day -- Thanksgiving, Nov. 22, 2007 to Earth Day, April 22, 2008. Then there is a certain four year anniversary one month hence (May 22/23) of a certain catastrophe involving him.

Any anniversary dealing with him is an unhappy one. 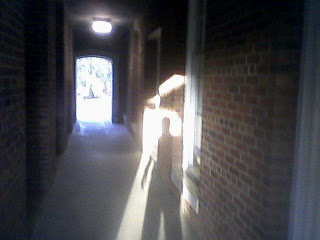 I was sick as a dog this morning: fevered, fatigued, flush, and felt like I was going to faint. I thought I was going to have to go home from work. I drank too much last night (again), but I also had a shot of Jägermeister at some point -- which is a BIG no no for me. I get very ill. It was my fault for not paying attention.

I'm watching the back-to-back Will & Grace episodes on Lifetime. There was a National Geographic program on cults and then another on the Unabomber earlier tonight. Worshiping any human only leads to disaster, even one who says he is God, or that one foolishly holds up as a god, even when he never asked to be. 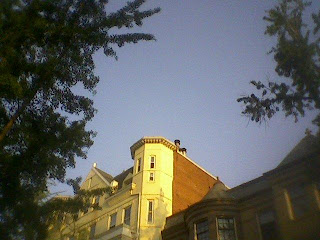 I also had a nice phone chat with my mother. Yesterday (Earth Day) was 4 years to the day of what I thought was the final break in my relationship with her, but about two years later we had a reconciliation, and it has been basically fine since, though we don't actually talk that much.

Did I mention I mostly hate anniversaries? At least this one need not be remembered.

Oh, yes, my mom is TOTALLY PRO-HILLARY! This is a total shock to me considering how she (and her husband, my stepfather, who hasn't changed) felt about Bill and Hillary Clinton in the 1990s.

I am very pleased that Hillary won the Pennsylvania Democratic primary, but it is still unlikely she will be the nominee. As for the mediawhore narrative, I figured it would be, "EVIL LESBIAN DEVIL STEALS EVERYTHING, BURNS BRIDGES THAT OBAMA TRIED TO BUILD! BITCH!" Just wait until Obama is the nominee and then the whore-narrative will shift to, "WHO IS THIS CRAZY OBAMA WHO IS RUNNING AGAINST WAR HERO MCCAIN?!" 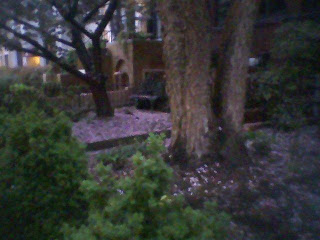 We had a nice two day rain event that totaled officially 3.84" at Dulles Airport (IAD) -- the most in a two day period since the June 2006 deluge, although there was a 5-day period with more rain in Sept. 2006. Dulles, which had the driest year ever in 2007, had been in a prolonged drought. National Airport (DCA) had 2.07" in the event earlier this week and BWI Airport (BWI) had 1.97" of precip.

I'm so tired ... I need to be to bed by 1230AM. I don't know if I'm going to get that next entry up in time on my Arcturus blog. It might just have to wait a couple more days.

I don't know what to write. My brain feels numb. But I thought I'd leave a trace of my presence here.

Should we congratulate you on the Deneb sighting or not?

And I do appreciate it, My Rose of Sharon (that's Rosasharn in Steinbeck's Grapes of Wrath) that you thought enuf of me to leave your presence on my blog.

As for "congratulating" me on my unintended Mr. Deneb/Sirius Sighting, well, that's probably not necessary.

I don't exactly think it was GOD Almighty On High Three-in-One, Triune Unified, Alpha and Omega, World Without End, Amen, manipulating the Fabric of Space and Time and Reality for Some Big Purpose.

I was going to campus (as I do on Tuesdays) late (my morning class had been canceled), and Mr. Sirius Deneb was doing whatever it is an urban gayborhood gentleman such as himself does during the day. (That would involve the gym, of course, which I should make time to do.)

Cue Battle Hymn of the Republic:

"He is trampling out the vintage where the grapes of wrath are stored!/ He hath loosed the fateful lightning of His terrible swift sword: His truth is marching on!"

Pure happenstance. It is what is, to quote Phil.

As it is, Mr. Deneb seems to avoid being in places (read: Cobalt) where I might be, which presents more than a touch of irony on multiple levels.

The big news was how bulked up muscular big the boy was. Almost too big, and to what end or purpose, I don't know. Apparently, he seems to think he'll wink out of existence if he doesn't somehow get up to the size of John Cena.

As for size, though, I'm not in any position to talk. At least his is muscular. I'm about as flabby as ever, and my ass has never been bigger.

How about you congratulate me on that?

Did you know that when I arch my back, I can balance my book bag on my butt? That's real talent. I should change my name to Sha'quan'da'eisha. Jones.

"Our GOD is marching on!"

(I thought the lady in the link looks a bit like you around the eyes.)

P.S. Check out the Mormon Tabernacle Choir singing Battle Hymn of the Republic.

Hereby I would like to congratulate you on your epic ass:-)

Amazing arrangements by the way. I like this version, never heard it done in such an elaborate way.
Besides I have fondness for choirs. Especially male choirs, not sure why

Wow an Australian cardinal says that there is no global warming. He even knows that the stratosphere is cooling but apparently the Scripture doesn't explain that this is in fact consistent with a warming of the troposphere.

My favorite sentence is this:

The cardinal acknowledged that enormous climate changes have occurred in world history, such as the Ice Ages and Noah’s flood.
Well, I'd say that the latter was sort of anthropogenic in that the Almighty's wrath was induced by human sins.

First some archbishop argues that condoms are transparent to HIV and now this. Will they ever stop embarrassing themselves and the institution they represent?

Thank you on your compliment about my epic ass. We will be showing "The Greatest Story Ever Told" on it next Wednesday night at the Starlight Express Outdoor Theatre in the Park.

Do you also have a fondness for Mormons? They don't drink alcohol, you know.

I'm homo early because I have to finish that damn project course paper by midnight. One way or another, it will get done. I could meet you thereafter, but I'm guessing your in Arlington tonight with L'il Dilweed. I'm going to Paul's mom's memorial service tomorrow in Silver Spring and then on Friday, I'm helping LP move some clutter around his place for pay. I'm that broke until next Friday. Boo. The good news is it promises to be a rainy weekend. Yay.

Oh, yes, remember that lanky boy you saw at Cobalt that you got so worked up about? I saw him the next day (yesterday) at lunch in Bethesda. He apparently works in Bethesda near me.

As for the Aussie bishop and what Holy Scripture says about stratospheric cooling versus tropospheric warming, increased frequency and strength of the natural modes of coupled ocean-atmosphere variability, anthropogenic climate change signals,and their relationship to the impending Rapture and appearance of Anti-Christ, let's discuss that another time.

The Pope DID say, though, that pollution is a "sin," so that's a start, I suppose.

The spider boy works near you? he's HOT.

I don't know about Arlington. I wasn't going to go but I may... I don't know. It all depends. But I promised you something so I'd like to see you somehow.

I believe St Augustine wrote an entire chapter on Trop-Strat coupling and double thermal tropopause events near the subtropical jetstream.

But Yeah, the pope did say that and that's a good thing

Ugh. Jagermeister. Reminds me of my weekend. Too much!