Harbor Waves, Nuclear Castles in the Air, and One More Wish 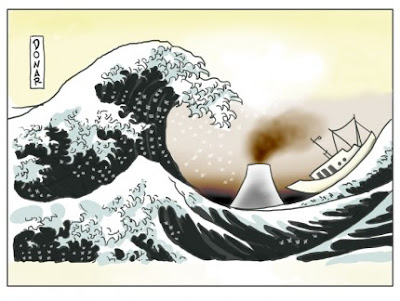 Above image: This is a rather clever picture that is an adaptation of the famous woodblock print The Great Wave off Kanagawa by the late 18th / 19th Century artist Katsushika Hokusai showing a tsunami with Mount Fuji in the background, except in this case Fuji-san itself has been replaced by a nuclear plant cooling tower.
The word "tsunami" means "harbor wave" in Japanese. 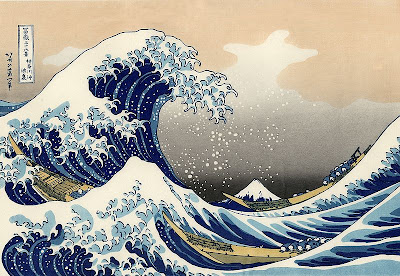 Here is an image of that famous woodblock print by Hokusai. It was actually one of a series of woodblocks in his series Thirty Six Views of Mount Fuji.
####### 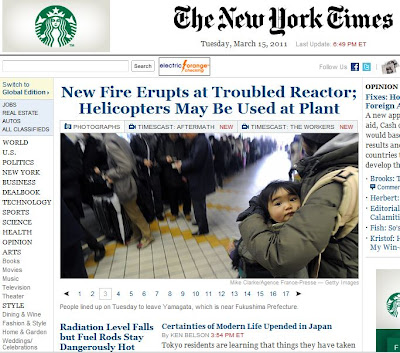 The multiple nuclear disasters ongoing in Japan worsened yesterday, only to appear to stabilize earlier today, but now it appears that another fire is burning in one of the reactors at the Fukushima Daiichi ("Fukushima I") Nuclear Power Station. 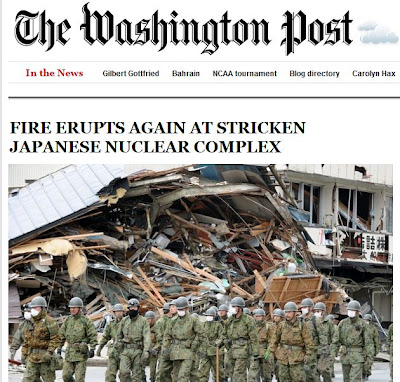 Of note, The Washington Post online seems to have CHANGED its online front Web page format since Sunday. The previous entry lead image was the older style.
#######

Remember that there are six reactors at the Fukushima Daiichi facility with possible partial core melts ongoing at Units 1, 2, and 3 and the fire tonight is apparently at Units 4. Not much as been said about Units 5 and 6, although the rods in the spent fuel pools (whose waters aren't being replenished and/or cooled) may be heating up. My understand is that three reactors (4, 5 and 6) were offline when the earthquake / tsunami occurred. Apparently the fire has erupted at Unit 4 tonight. Could it be that the rods in all six spent fuel pools are in danger as well as the four of the six reactors?
The situation at Fukushima Daini seems to have quietened downed for now. 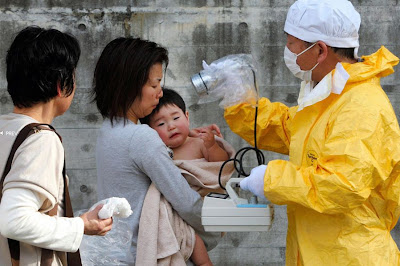 A mother and her baby are checked for radiation near in Fukushima Prefecture near the damaged nuclear power facility, March 14, 2011.
####### 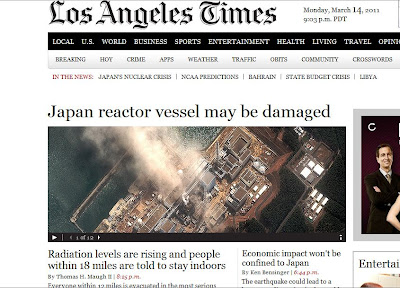 There were two more aftershock earthquakes tonight following the massive quake on Sunday -- which was upgraded by the USGS from 8.9 to 9.0 on the Richter Scale. Tonight's quakes were 6.0 or so and actually SOUTH of Tokyo. 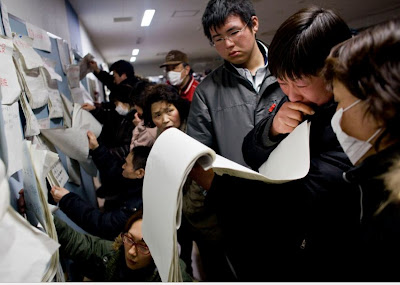 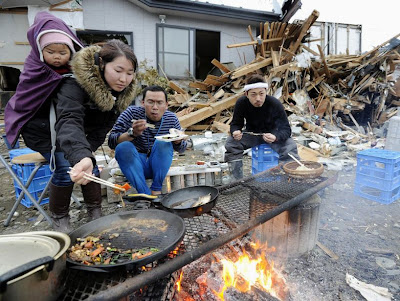 Survivors cook their dinner outside over an open flame behind houses destroyed by the tsunami-generated earthquake that struck Ishinomaki, Miyagi Prefecture, March 15, 2011.
#######

More generally, Japan is suffering mightily, in particular in the region impacted by the earthquake and tsunami with little food in grocery stores. Basic infrastructure and distribution systems have broken down in places and there is a level of panic across Japan, including Tokyo.
The Japanese stock market has plummeted over 15% in two days. 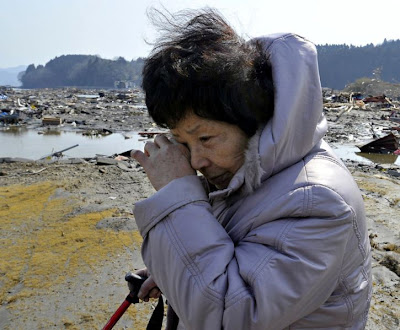 A woman looks for her missing husband in the tsunami-devastated village of Minami Sanriku, Miyagi Prefecture, Japan, March 13, 2011.
#######

All the footage of the tsunami surging in on Sunday is just incredible. Some of it doesn't even look real -- you'd think it was bad special effects. 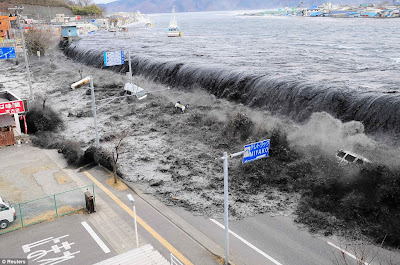 Here the tsunami surged in a scary cataract of frigid black waters over a seawall in Miyako, Iwate Prefecture, Japan, March 11, 2011.
#######

On a personal note, while I've never been to Japan, I feel an odd affinity for it. Not only did I just spend two (very unhappy) years working for a Japanese consulting firm in Bethesda (my boss was a horror to work for, but I liked and respected Japanese culture), but as a child, my dad spent years studying karate -- achieving the level of 2nd degree black belt -- in the Shotokan karate school under Robin Rielly in New Jersey between about 1975 and 1985.
It was way back in the 1970s when my dad studied karate (he was quite good at it) in a dingy and dilapidated building -- the "dojo" -- in "downtown" Toms River, N.J., on Friday nights, I used to go with him and have a piece of pizza in the downstairs pizza parlor, where a HUGE and friendly fat guy named Tony used to make pizzas endlessly while the group upstairs crashed noisily into the floor.
"Sensei" Reilly had studied under a karate master in Japan years earlier, who in turn studied under the founder, who as I recalled from pictures of him looked like a Japanese samurai warrior from another century. 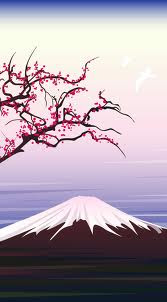 Anyway, long story short, he had this poster showing Mount Fuji at dusk. You could see lights running up the mountain until they disappeared into the evening dusky snowy heights of the mountain. And there was some slogan underneath it about the whispering wind ...

Maybe I'm remember two different posters. It was such a dingy building.
I actually joined the karate class for a period of time. 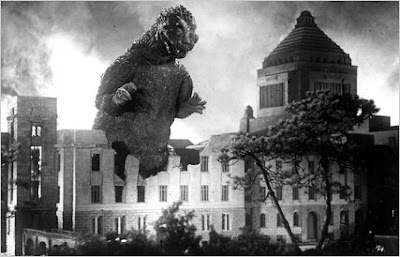 OK, I know a link to an article about the Japanese cultural significance of Godzilla may seem silly -- almost profanely disrespectful -- given what is going on now, but this piece appeared as an Opinionator column in the online version of the The New York Times by Prof. Peter Wynn Kirby, an author and scholar at Oxford, is well worth a read.
He discusses why Godzilla ("Gorija") was so incredibly popular when the creature made his movie debut in 1954 -- in the difficult immediate post-World War II and intense Cold War cultural context of the time. 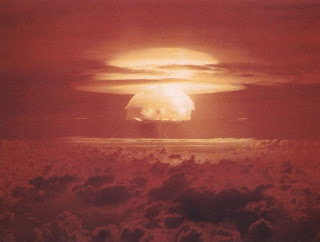 Much of it involves Japan's experience with nuclear radiation -- not just at Hiroshima and Nagasaki but also from U.S. testing of nuclear weaponry in the South Pacific, in particular at Bikini Atoll and what happened a short while earlier to the hapless Lucky Dragon No. 5 tuna trawler in the wake of the test of "Castle Bravo" -- the most powerful H-Bomb ever tested by the United States.

I have that lovely instrumental One Wish by the band Hiroshima stuck in my head. I've posted this before, I think, but I'm posting it again. It has some lovely Japanese garden still images in it.

OK, that's all for now. I'm going to go to Larry's Lounge for a little while tonight, and hopefully it should start raining soon. 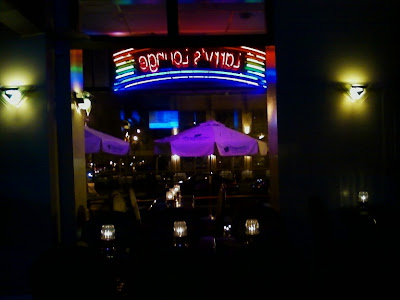 My next planned update will be later this week.